There's no such thing as a quiet Sunday morning in bed any more is there?  I wasn't up all night partying and I'm not nursing a hangover, but I'd like to have a bit of a lie in until maybe half ten eleven O'Clock.  I don't think it's too much to ask.  After all, Sunday is supposed to be a day of rest, a day to take it easy and unwind before the stressful working week ahead.  Is this possible?  No of course it's not possible and here's why.

I basically live next door to Homer Simpson and his family and I've always ended up living next door to Homer Simposon types.  There I was lying in bed at around 9am this morning, kind of dozing in and out of dreams whilst enjoying the bird sounds wafting in through the slightly open window (necessary when it's a little stuffy at night).

All of a sudden - "THWAK!" and my peace is shattered as the plasic bucket makes contact with the pavement.  Let the noisy car washing begin!  Radio blaring, clanging and thumping, the singalong, the kids yelling as they run in and out of the house to help, shouting across the street to anyone who will listen.  I was lucky today, because at least he waited until nine O'Clock before getting started. I've seen them all out there before 8am on other occasions! 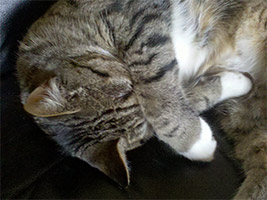 I'm sure some of you must have come across these people.  If they're not out washing the car early on a Sunday morning then they're cutting the grass with the noisiest mower they can lay their hands on.  Failing that, there's an endless list of DIY jobs that need doing.  This usually involves banging a nail in something or using a drill.  If there's no DIY, gardening or car washing to be done they'll start tinkering with something (usually a car or a lawnmower).  The toolbox will be out, radio on and the sound of spanners clanging will go on for the next hour or two, perhaps interrupted by the odd noisy phone call and a bit of singing or yelling at the kids.

And she's no better than him when it comes to being considerate.  Sometimes it's either a Saturday or a Sunday but the hoover goes on at quarter to eight and the first room to be done is quite often their bedroom, which happens to be right next to mine.  For goodness sake how many times can you whack the skirting board with the hoover anyway?  Grrrrr...

it is pretty quiet round here, i am grateful, everyone knows each other and we all get on. we have huge trees, and we get loads of pigeons calling and doves etc. am so grateful 4 that.
10/01/13 ruthquilty
-8

Well I will say that I went for a walk around my neighbourhood and it is extremely peaceful right now and this is outside, but only saw a few cars drive by as I was out. It is very peaceful on Sundays here.
16/12/12 Donna
-3

So, your neighbours are supposed to curtail their Sunday family activities so that you can lay quietly after 9AM? This seems a reasonable time for hedge trimming, lawn mowing etc. Buy some ear plugs.
16/12/12 Heisenberg
-7

I am baffled to hear how rotten you people sound. I understand there is some people who cause noise pollution but to consider a man "working" on his home on one of his days off is absurd. Clearly you people do not have children living with you because you can actually stay in bed past 7am. I bet you can't stand passing airplanes, or is that ok because they are white?
28/10/12 Bob
-10

Let's face it, so many people today are totally selfish and consider no one but themselves. You can see that just by driving a few miles any day. My advice to anyone suffering noise problems (as I have on 2 memorable occasions that went on for months) is to move. Now I live in the countryside with the nearest neighbour 100 metres away. It's only a small and modest property but I'd rather have this and have peace and quiet.

Never say "I can't move because..." You can always move; there are always answers and solutions to every problem.
16/10/12 Mr Rupert
-7

Jobby, You may not spend all your time hunched over a computer, but what about your other persona?
08/10/12 anon
3

Hello jobby and all, That took some length of time to come back, D.I.D you have to consult with the rest of your personalities before answering?
07/10/12 anon
12

Julian Cope/ jobby, I'm your other split personality talking back to you. How many more aliases do we have?
06/10/12 anon
9

Jobby they are taking their time to build it and making as much noise as they can to really pee you off, they hate you too!
06/10/12 anon
3

in the spring and summer, all i can hear is the local wood pigeons and birds doing their early morning call. COO COO COO COO!! Bliss!!
05/10/12 ruthpigeon
4

My Easter Sunday morning was almost ruined by my neighbour's kids. To be honest it wasn't the best day to be playing outside but these kids were running around screaming, kicking balls and throwing hoops. Thankfully, one of the hoops got stuck on a tree branch and after a few unsuccessful attempts of getting it down they gave up and went inside. I thought they were having an Easter hunt in the garden but that doesn't involve kicking balls and throwing hoops around the place.

Entitled to sleep, I completely sympathise with you about your inconsiderate neighbour and her child. Since when is it ok for her to have a get together with friends at 8am on a Sunday morning outside? You also say there is a place she could take her kid to that is only 5 mins away to run and scream, same with my neighbour's kids as there are two lovely parks they can go to in my area just around the corner but these neighbours just dump them in the back garden to inflict me and other neighbours (who don't have kids of our own) with their aggressive playing and incessant screaming. Does this neighbour bother you on other days of the week as well? It is not fair that you are ill and you can't properly recover because of the stress, sleepless nights and anxiety this is causing you. You have a right to get better! My neighbour's kids are also giving me stress and it is making my blood boil. Why can't these kids parents restrict how much they can play outside? They have to understand that there are others who have a right to a quiet life like you do especially if you are ill.
08/04/12 Angry Autistic Female
9

I am not that old ,but I remember the old days when sundays were silent, ok somebody cut their grass at 2pm not 7am , I know some people work all week & this is the only time they can do it, HAVE A LIE IN, I work sats & sundays So i am going to work, But it must grate other people....
01/04/12 I know how you feel !!
1

I TOTALLY FEEL FOR YOU! I have recently had to give up work due to ill health. I use the work shifts and would be waken in the early morning to the screams of my neighbour’s daughter shouting at the top of her voice ‘Mummy, Mummy, Mummy, Mummy ….’ Or ‘Help me, help me, help me …. ‘repeatedly. I would fall out of bed with shock stumble to the window and thinking the child was in danger only to find me either left outside along shouting or standing beside her mum shouting. Yes I have opening the window and shouted shut up and other choice words. One weekend we were awaken at 8am by the sounds of lots of chit chat and screaming child. Low and behold there the mother is in the garden with friends having a get to gather AT 8AM for the love of God! And just to join in with them Mr DIY across the back thought he’d start his drilling them also. What planet are these people from. The neighbour with the child even woke me up one morning when she was shouting at another neighbour’s workmen for starting at 9am and waking her up, practice what you preach love! Basically if I could move out of my neighbourhood I would, I live with the worse neighbours I have ever had. The mother with the child might get up nice and early in the morning and think we all should be up also at the crack of dawn, but when you are suffering from an illness which causes lots of stress, anxiety and sleepless nights you need any rest you can get. 5 mins down the road is a playgroup with swings etc and I suggested she take her hyperactive child down there and not to be so lazy as to leave he out the back screaming. Needless to say words continually exchange between us and housing officers are of no use, I tell them if I wanted to hear children screaming all the time I would have some! This neighbour has even attacked me and not one person in our so call lovely neighbourhood came out to help me typical all stay behind your net curtains.
28/03/11 entitled to sleep
2

Tuesday, the day of the week I hate the most