It really get my goat, when people turn up the volume of the car stereo and open all the windows.  Haven't they ever heard of noise pollution, and do these people imagine that everyone else has the same tastes in music as them, hence the need to broadcast to the public?  Quite apart from not being able to hear anything else around them, such as a horn or siren (surely a safety issue), it's actually very annoying for the rest of us just walking down the streets.  Why do these people feel the need to play their car stereo so loud with the window open?

That familiar thump, thump, thump can usually be heard long before you see the car.  Whilst the car itself may, or may not be sporting tinted windows and an extra wide tail pipe (the usual dress code for such vehicles), it will almost certainly have a baseball cap clad youth in the driver's seat.  This young man tries to appear cool as he gazes around at the passers by through his sunglasses.  He needs to make sure that enough heads have turned and paid adequate homage to the boom box in the depths of his car.  You see It wouldn't do to have spent all your wages on car audio equipment and then get little reaction. 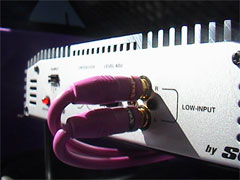 You can barely hear anything over the din

But there's worse to come.  Not satisfied with deafening people on the street, the pumping sound from no doubt expensive car audio can still be heard when sitting in front of the TV.  You've settled down to watch a nature program or to listen to the news and find out what the rest of the world is doing.  What's the point though?  You can barely hear anything over the din.  All you hear is the pervasive thump of music or some rap artist screaming obscenities in your own living room.

Another form of noise pollution is car horns.  Why not get out of the car and ring the door bell?  Oh dear, I forgot.  Why on earth would you want to do that?  Better to be a lazy bum and remain in the car whilst blaring the horn and revving the engine.  How considerate of you!

Absolutely agree with Kryton`s comments. Its amazing how far low Bass sound can travel, it even goes through my double glazing with all the windows shut at home. I do wonder if some of the offenders are high on drugs.
05/07/13 Roger
5

Yesterday, I had to endure a set of temporary lights outside our place. They were there to allow cyclists on the London to Brighton ride to cross the A25. Our whole day was destroyed by the brain dead and their thirst for bass. On a couple of occasions i asked them to turn it down. The only reaction was the usual gaping mouth with the dribble just hanging on the bottom lip and "wos ya problum bruv innit". Next year i'm getting a paintball gun to fire through the open windows.
17/06/13 Lord B
-9

Iv`e had these characters drive by my block of flats with their sterios playing so loud that my windows vibrate. What are they trying to prove?. I think that they`ll live to regret it when they`re 30 or so, & have gone stone deaf from blasting their eardrums with all that loud music.
20/10/12 hairyfairy
-3

Enter a store with loud music...pick up the most expensive item you can find in the store go to the cash register and start a purchase in the middle of the trasaction look up and state, You know...the music in here just sucks....and walk out the door!
18/07/12 do'n it!
-6

One can normally deduce the interlectual level of the car driver that is proceeding with windows wide open and what they call music blaring out. The stupid lunatic grins and nodding heads (glans), with hoddies (prepuce) pulled up. It only follows, that the cock of some species must make the loudest noise to attract its own kind. Iam glad that they will continue flourish, for what else would give us a good laugh these days?
26/04/12 Jethro
1

nix, the same thing is happening here in shops. There is a separate gripe about it.

I don't know why they think they have the right to force this noise on people. I would prefer no music at all in shops but if they must play it then why have they lost all sense of the phrase "background music"? It is always so loud.

Unwanted noise is pollution and an invasion of our space and privacy. I sometimes wonder if prisoners could sue for their human rights being violated if music was forced on them all day.

In a shop or restaurant, if you complain in they suggest that you go elsewhere if you don't like it; that might have been possible once but now there is nowhere else to go as nearly all shops and cafes play it.
26/04/12 Fed up pedestrian
-5

Have you noticed how loud background music in stores is getting in the U.S.? People in the U.S. must be going deaf gradually. I have trouble talking with the salesperson over all the loud music.
25/04/12 nix
0

The police would have to fine half the people in my neighborhood. A boom-boom car goes by every few minutes. Each driver thinks, "Hey, I'm only being heard by someone for a few seconds. That's not bad, right?"
25/04/12 nix
-4

I play music in my car at some ear melting volumes..... why... because I like loud music,I choose not to do this at home as my neighbours probably couldnt handle hours of drum and bass... at least Im on the move in the car so you may only have to put up for a few seconds.
01/06/11 Loud man
-1

Most people are good looking or witty or intelligent or successful and as such will have friends who like their company. I've been told that people who turn up their car sound systems and open the windows, (or drive with all their lights on) have so little going for them personality-wise, that they have to find other ways to get people to take notice of them. When you're that inadequate, any attention is good attention.
18/02/11 Weston Babe
-8

Kryton, I fully agree. The persons making the noise are some 100metres away, and my windows still rattle! Our local police are not interested until it's after midnight (if you're lucky). Has no-one a device that can neutralise this noise? Transmit something on a frequency that these players occupy?
08/02/11 Desperate
-15

I don't understand why it is considered anti-social to inflict your music on people from a car stereo but shops and restaurants can impose music on their customers and if you complain they just say "We like it".
15/12/10 cedi
9