I live in a council house both my partner and I work.  My neighbours, one is disabled due to a bad back her partner doesn't work as he claims to be to over qualified to get a job!

They have a large tree growing in their garden which overhangs into ours and as it is a willow tree it grows fast and spreads and leaves mess everywhere.

We tried to cut the tree back on our side at the weekend.  Only to get screamed and abused verbally by our neighbours about touching their tree.  They then informed us we are not allowed to touch the tree until the housing management people have been to see us.

Apparently they had already reported us for "touching the tree" the week before.  This came as a bit of a surprise and was the first we had heard of it. 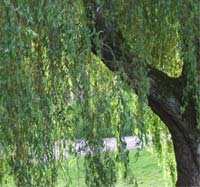 they moan and complain about anything

We now have housing management getting involved over us trimming a tree.  All he had to do was pop round the week before and let us know he had spoken to housing and that we had to await their visit.  At that point we would have called housing and clarified the situation said and that would of been the end of it until they came to visit.

Do you have a conflict with a neighbour over a tree?  Post a comment on our discussion forum.

Instead now we feel so much anger and frustration towards our neighbours.  This whole conflict around the trimming of this tree could have been so easily avoided.  These people clearly have nothing better to do with their time because they moan and complain about anything.  They don't even go in the garden anyway as the sun brings her out in a rash apparently!

I have my neighbours ivy, bush and tree branches breaking through my fence, on top of that my neighbours increased the height of his garden and subsequently rotting the lower part of the fence. I have concrete gravel boards below the fence panels and even those are now effected with the weight of soil pushing them over. My legal insurance says I can do nothing except talk with my neighbour. I believe this advice is puerile.
11/09/18 digdog
0

In the last few weeks we have been out and we have had our neighbours ( council tenants) climbing into the garden and cutting branches off back to the trunk of the tree as well as cutting he tops off other smaller trees. No one wants to get involved, Scotland, police or council, both saying we don't want you to fall out with them. I cannot believe that criminal damage can be swept aside like this.
08/11/15 Hugger
0

We all think we are reasonable people. I live next door to two of the most selfish people you would wish not to meet. In thirty years we had the washing line with washing cut down twice from a fence post without explanation, we caught them a third time to be told it was moving the fence post. I immediately moved the washing line. I also found them using a hammer on our side gate instead of telling us it was left open on one occasion. There are quite a few more examples of there selfish behaviour.We returned a ridge tile that had gone through the greenhouse no offer to pay for the broken panes was forthcoming.
I asked for their trees overhanging branches to be cut on several occasions and after 18 months cut then back myself and took the branches to the local council refuse site. The next time when they had grown back I returned the branches as I felt I was their unpaid gardener as branches had been trimmed on their side by their gardener.
I have just asked them to trim the branches or I'll have to, only to be told that the trees where here before me. I also now got to listen to annoying loud wind chimes.
I do not consider them to be neighbours from hell and over the years tried never to stoop to their level but I am starting to get to the end of my tether, I always informed them when we are having work done.
Each time I try to get them to cut overhanging branches I am met with abuse.
Anyway thanks for letting me have a rant, it does not matter how reasonably you try to be some people will always try to take advantage or are just plain selfish.
01/07/14 cutitback
0

I always understood the law to be you can cut back any overhangs but must drop the branches back into your neighbours property because they effectively belong to them.

I was arrested and received a cautioned for trimming back a conifer tree. It was both overhanging my property and blocking ascess to my private post box.
03/04/14 Carlos82
0

Tcharlach. The contractor. but if it was a cash in hand no V.A.T contractor. Your neighbour may end up with the bill.
12/10/11 Boblet
-7

A neighbour employed a contractor to cut down and remove a very large problem tree. As contractor was cutting it down the tree split and a large portion fell against a block of Flats and damaged windows and gutters. The Flat owners believe a survey should be done to ensure there is no structural damage. Who is responsible for the damage and the survey?
12/10/11 Tcharlach
-11

The problem I have is that the roots of my neighbours tree has lifted the paveing slabs and made it dangerous to walk on. My mother who is 98 liked to sit there but now can't .The bungalow is a let I have told Leaders the letting agent who say they have told the landlord. I have phoned the landlord and can only speak to a answer service.The hedge in the front garden is now over 6ft high and is laying over into my garden damaging in metal fence and its roots are in danger of pushing the wall and fence over.
04/08/10 Bob Hambley
-5

It has been mentioned before but worth repeating.

As such, responsibility for the tree rests with the landlord - in this case the Local Authority.
05/07/10 Congo
-4

Anyone having problems with neighbours trees:
Google "right to light law" u.k.

Also I think a law was passed last year which deals with this problem, ( leylandi law? )
It can be dealt with by your local council, a fee is payable.

Haven`t read all the posts in this thread so forgive me if I`m repeating advice.
04/07/10 Jacky
0

How can she be a free loader if she is disabled I would refuse to cut with your attitude, It is polite to ask? dragged up?
04/07/10 bb
3

I have 2 large trees blocking light and over hanging my garden. 1 of the trees is so large that it hangs over my drive and is apprax 3 feet from my house. I have spoken with the people next door and they wont do anything about it, what can I do
03/07/10 1962
-7

There's no way you could charge your neighbour as you suggest. It would lead to chaos because of all the gardens it would apply to. What court would dare to set a precedent like that?
09/06/10 TT
4

My neighbour's tree keeps growing over into my garden and it sheds leaves into my pond. When I complain he tells me to cut it and throw it over into his garden, but is that MY job? Why do I have to do that for his tree? Can I get a gardener to do it and send him the bill? Can I charge for cleaning up his leaves that fall in my garden?
09/06/10 Fed up
-9

People who buy their council house