I've recently moved to a terraced house and I am sandwiched between two neighbours who have dogs.  This in itself isn't a problem even though we have cats.  The problem is the constant barking from the dogs on BOTH sides.

This happens from early in the morning, quite often through to the evening.  The dog on the right barks whenever anyone walks along the passage at the back of the house and constantly barks early in the morning when his family get up.  The humans of that household aren't exactly quiet either with all the shouting and banging doors really early and then the gate, which is on a spring, constantly slamming as each of them go off to work.  A dog protecting the property and warning off strangers is one thing, but they go off even if people are nowhere near the gate! 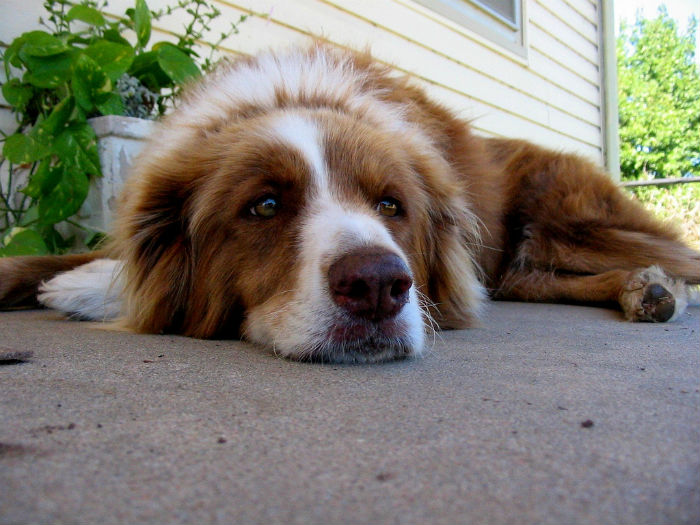 On the other side there are two old dogs, they are left in the garden for most of the day.  The moment someone steps outside there's a flurry of excited barking and growling.  The rest of the time the dogs sit on the doorstep whining and scratching at the back door, presumably hoping someone will let them in.  The whining is punctuated by the odd bark when they see one of our cats in the window.  I believe the man who lives at the house has recently been in hospital and that is the reason the dogs are left out during the day.  It's been nearly six weeks now so hopefully the dogs' owner will stop leaving them out soon.

I know that dogs can be trained to prevent them barking needlessly and I suspect it's just down to the type of people around this neighbourhood who are too lazy to train the dogs.  I work from home and all the noise makes it very difficult to concentrate and be productive.

As if the constant barking wasn't bad enough, whenever I go out of my front gate I quite literally have to dodge piles of dog shit that these lazy selfish people couldn't be bothered to clear up.  This town has a problem in that area and it would appear that lots of homes have dogs.

When will dog owners realise that not everyone likes dogs. I can't stand them!
10/02/18 Dog hater
28

I was going to ask the council about a similar problem we have with the resident loudmouth.

Its a hunting dog so gets out a lot more than most, looked after well but every morning dfreom about 6am onwards it yelps for hours and its not a bark its more like a wining but the dog gets vet checked regularly as its part of the familys income so its no in pain. I Just don't get it.

I think a lot of it can be down to the owners being lazy and not taking them for a walk. The poor dogs are probably going stir crazy from lack of new surroundings and exercise and stimulation.
24/10/16 ahforfoulkessake
3

It’s important to realise that barking is a dog’s means of communication. You might be surprised to know that the vast majority of people will tolerate a dog’s barking up to a point. Not only do they understand that it’s completely natural for a dog to bark, but some people gain a sense of security in knowing that a particular dog might be trying to alert their owners (and consequently – the neighbours) to something that is out of the ordinary or potentially dangerous, such as an intruder may have entered the garden or back yard.

Incessant and Nuisance Barking
However, problems arise in a neighbourhood where a dog is either barking incessantly and/or the constant barking is causing a nuisance at inappropriate times of the day. This will usually be at night where the dog may be kept outside and you cannot get to sleep, or perhaps you have young children and they can’t get to sleep. The problem is what to do about it if you find yourself in this situation.
Basically you have 3 possible course of action:

Direct contact with the neighbour to find a solution
Report the matter to your local Environmental Health Department
Court action
Below is some good advice on how to proceed with each of the above options:

1. Contact the Neighbour
If a dog is constantly barking in your street and is causing a nuisance, there are laws to address this issue. However, few people take pleasure in upsetting their neighbours wherever possible and most would wish to take a ‘diplomatic’ approach to the problem first without Resorting To Legal Action.
The ways in which you could try to get a resolution to the problem might vary. It could all depend on how you feel about directly confronting a neighbour by knocking on their door and speaking to them about it. Others might feel that the neighbour in question might not be reasonable and that they could be hostile towards them. If you choose to speak directly to your neighbour, the best way to go about it would be to go round and see them and say that you’re just checking that everything is OK.

Your approach might be along the lines of :
“I just popped round because your dog’s been barking for the last 2 hours and I thought there might be something wrong?”

In taking that approach, you’re avoiding direct confrontation which could irk a neighbour and cause them to become hostile towards you, while still getting your point across. On the other hand, if you’ve been down that road before and the problem persists, you might decide you want to tell the neighbour that you’re having difficulty getting to sleep as a direct result of the dog barking.

If, however, you don’t wish to directly confront your neighbour, you could pick an opportune moment to put a note (anonymous - if you really don't feel comfortable) through their door, informing them that if they do not get the barking under control that you will report them.

2. If that Doesn’t Work? Contact your Environmental Health Department
Dont' call the police or the RSPCA - If you need to take things further, don’t call the police or RSPCA, unless you have an otherwise valid reason to do so. Instead, get in touch with the Environment Health Department of your local authority.
They will investigate the matter and deal with it. Sometimes, even the owner of the dog might not be aware of the problem. For example, a dog might just persistently bark when the owner leaves the house and the dog cannot cope with being left on its own.

Initially, an environmental health officer will try to advise the dog owner of ways of overcoming the problem. The owner, for example, might be highly embarrassed about the problem themselves, yet have no idea how to resolve it, and the officer will be able to suggest methods for training the dog not to bark in an incessant manner.

3. Legal Action: Environmental Protection Act 1990
However, if this doesn’t work, then it can lead to a Statutory Notice under the Environmental Protection Act 1990 being served upon the owner. This is a legal procedure which gives the owner around 21 days in which to resolve the issue. The Environmental Health Officer will do this on your behalf. If the problem hasn’t been resolved after that point, the owner can incur financial penalties and, as a last resort, the Act does have a provision whereby it can take away the dog from the owner.
In most cases, problem barking is caused by either neglect or, more commonly, because of insufficient training.
24/10/16 Willum08
1

Some people just don't care. "Out of sight out of mind." I have 2 dogs and they will bark if they hear a noise or if someone comes next door. As far as they are concerned they are doing their job. That's fair enough as far as it goes BUT I will stop them barking straight away if I am at home. We live in a little village in North Wales so there aren't many people that come to our neighbour. She doesn't mind the dogs barking as it makes her feel safe and as she says "Dogs will bark" However once mine have had a bark I will stop them by saying "No" or if they get really excited I will bring them in. Before getting a dog people should be prepared to put the effort into training their dog. It takes time but it's worth it in the end.
24/10/16 Baz.
1