I seem to remember not long after I moved here having a discussion with my neighbour in the garden.  'Vermin' he called them, referring to the neighbourhood cats and to be honest there's quite a few around here.  Personally I don't mind this because I have cats myself and generally they're not a nuisance.  Dogs or puppies on the other hand that bark incessantly are!

Having lived next door to people with dogs before I am very aware of how these animals can ruin what would otherwise be a quiet relaxing afternoon in the garden.  When we first moved to this street the fact that there wasn't a dog next door was a serious plus point.  Unfortunately that all changed within a couple of months when the son moved back in and brought the dog with him, and yes, it barks whenever it hears the slightest sound.  Emptying the bin, opening a door or even just hanging out washing and the damn thing goes off like a fire alarm.

To make matters worse it used to escape through the fence and get into our garden and terrorise the cats.  This happened on an almost daily basis at one point and I came downstairs one morning, opened the door and was confronted by the dog barking at me in my very own back yard.  Whenever we mentioned the dog to next door the response was always something like "Oh he's alright, he won't hurt you", or "He's just being friendly..."  This would then be followed up with some yelling at the dog to try and persuade it to come back through the fence into their garden.

just as bad as the dog barking is the neighbour cursing at the dog to get it to shut up... 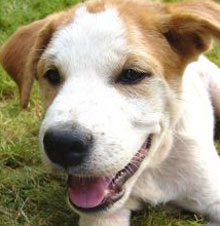 Eventually my neighbour sorted out the hole but their dog still barks all day long.  This really isn't fun when you work from home and could do with some quiet to concentrate and earn a living.  Actually, just as bad as the dog barking is the neighbour cursing at the dog to get it to shut up.  Oh and then there's the number of balls thrown to the dog that end up over the fence and in our garden.  I've lost count of the number I've tossed back over in recent weeks.

This dog isn't the main reason for this gripe though.  It's been very annoying, but circumstances have changed recently and now there's a new puppy in the house as well.  Now I know that puppy's tend to yelp and whine a bit, but this one seems to have picked up a few bad habits from the older dog and it goes at it all day as well.  For the last two hours in fact that's all I've heard.  I had thought that the puppy belonged to a member of the family that was visiting, however, it now seems to be a permanent feature.  Does anyone have any ideas what you can do when the neighbour has a dog or puppy that barks all day long?

By: Fed up with barking next door

I work for the council and dogs constantly barking if the neighbour does nothing to resolve it can be classed as anti social behaviour
22/10/14 ?????
0

Imagine that you are in a dog free enviroment, no dogs for miles around. Peace and quiet! But then you get broken into (touch wood it never happens).you have only popped down the shops and forgot to put youre alarm on. or youre in the bath and someone climbs in thru a downstairs window cos theyve seen your wallet/purse/bag on the table and fancied their chances. a dog would have heard that and alerted their owners and you to the fact that somethings was going on that you didnt know about. would you be so quick to moan about a dog barking then ?t.
23/03/13 kandl
-8

Sounds to me like youre not a dog lover and a cat person instead. obviously you have not ever owned a dog. dogs are lovely animals and i wouldnt be without mine. cats on the other hand ...dont get me started. Sounds like youre the type of person who would move house just to get away from the neighbours dog! Dogs bark, get over it. Puppies are especially noisy and dogs that bark persistently are not under control by their owners so blame the owners not the dog. a hole can be blocked and a dog can be trained by the right responsible owners
23/03/13 kandl
-2

Get in touch with the local council. noise abatement. ours are very good first they send out letters warning them followed by a visit. cured our problem
01/01/11 maza
-11

I rang the council about a persistant yapping dog, good enough they sorted it. Unfortunately we now have another yapping dog in the area. Dogs can be trained to live harmoniously with us. As for the owners you cannot educate/train a cabbage
01/01/11 boblet
-20

My dog ( a Labrador) always barks when I let her into the garden, but I only allow her out for a few minutes max, about 3 or four times a night. I have known people who live next door to dogs that are left outside while the owners are at work or out for the night, that bark incessantly. Such people should be banned from dog ownership.
22/11/10 Biscuitbum
0

Tell ya what, lock yaself in ya back garden and see how long you go before ya start yapping for help!!! Be kind to the animal instead of snarling at it to shut its gob! chuck it a fresh juicey bone, bigger the better, should keep it quiet for hours!!!!
18/09/10 Shosh Ages....
-15

you have several options: try and reason with your neighbour - if that doesnt work next time you are watering your garden with the hose if the dogs bark 'accidentally' get them wet over the fence - this may shock them enough to stop them barking- it may take more than one go though. if neither of those options work contact your local council enviornmental healt department and make an official complaint. I have 3 dogs asnd we never let them bark incessantly.
04/08/10 Hester
-7

If the dog has been left in the sun without shade or enough water then you should report the owners to the RSPCA at once.

You need to be the judge of the conditions it is being kept in but it could die if it overheats. You should look out for the dog's best interests.
01/07/10 concerned
3

Actually, Mr. Reeves did not die from being paralyzed. Being paralyzed was a result of his fall from a horse. His death was due to cardiac arrest, resulting from low blood pressure. You might want to pin that bit of information on your bib before you drool all over your keyboard, as most anal-retentive individuals that are afflicted with acute moronic syndrome such as yourself generally do when trying to think.

Oh yes, Bye bye France, you also need to apologize for high jacking this thread from the gentleman that created it. You see, you were supposed to stay on topic, which you obviously have extreme difficulty coping with, which is an indication that you have a neuro behavioral developmental disorder. Probably ADDS.

I also apologize to that same gentleman for my responding to a mindless twit such as you. I won’t be responding to you any longer Bye bye France because you have already had your tiny teaspoon of attention, and I have nothing more add to this thread, except that you may now babble and curse all you wish.
19/06/10 Fair Trader
-16

I wouldn't wish a death such as Mr. Reeves on anyone. People such as yourself, usually pass on from acute moron syndrome.
18/06/10 Fair Trader
3

If you have exhausted all communication with your neighbor, it is time to go to the authorities. There are laws that prohibit noise in residential areas. If that doesn’t work, then there are other more direct, and stern methods that may be utilized to resolve the main issue at hand.
Some thirty years ago, I lived in a rural area, where I encountered a similar situation. I owned several pedigree working class dogs. These dogs were used for hunting and breeding for profit. They were kept outside in kennels with tall fences. One day I found a neighbor’s male dog in my kennels inseminating one of my pedigree females. Yes, it scaled tall fences in a single bound. I reported the incident to my neighbor, and he found the incident rather amusing. I kindly asked him to restrain his dog while it was outdoors or consider neutering. He replied that he and his wife had no intention of restraining or neutering their dog, and that they felt that their dog should be able to freely roam the rural area. A couple of months passed, and once again, I found the neighbors dog inside my kennel. I entered the kennel, and leashed my neighbor’s dog. I then placed the neighbors dog into my pickup truck and took him for a very long ride into the countryside where I released him, with the hope that this quiet good natured animal would find a new home. In the end, I had to deal with the time and expense of feeding and finding homes for a litter of mixed breed pups, and the neighbor and his wife had to deal with the loss of a pet.
17/06/10 Fair Trader
9

Why would anyone even go to the bother of typing the previous silly posts ? I don't understand the mentality of these people. Surely we can disagree with each other in a reasonable manner?