It's becoming increasingly difficult to shop 'ethically' these days and choose products manufactured either in your country, or indeed in neighbouring countries.  I'm talking specifically about shopping online in this gripe, but it also applies to shopping on the high street too.  Although in that case you can have a look to see where that product is manufactured, but of course that isn't obvious and you may need to do some digging to discover that those Polairoid TVs in Asda are in fact manufactured in China.

I can't find something not 'Made in China'

The pair of slippers pictured in this gripe were bought from Matalan.  Despite searching carefully to try and find slippers manufactured somewhere other than China these were bought for me by my partner after many dead ends trying to ascertain where they came from.  It was a gamble and of course when they arrived - they were of course 'Made in China'.  But OK, the deed is done and I needed them as my last set slippers lasted barely a year before being fit for nothing other than the bin. 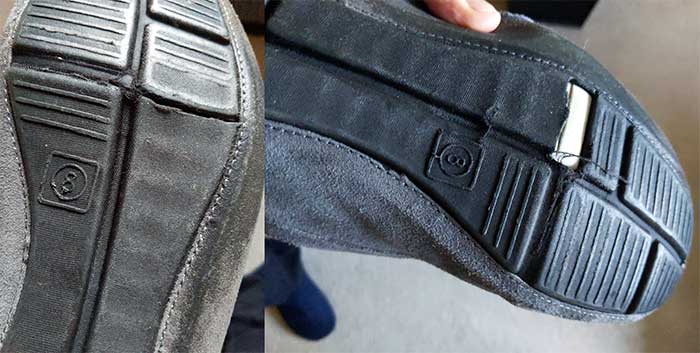 These slippers however beat the record by miles, they didn't even last a month before the souls cracked and made tripping up a daily occurance.  What did I expect?  Well not a lot really.  My expectations for Chinese made products are spectacularly low.  But that is not the issue.  It's the fact that I can't find an alternative and I can't find something not 'Made in China' because none of the big retailers have the balls to publicly state where their goods are manufactured.

The big giants such as Google, Amazon and Ebay are even worse and in my mind have probably exacerbated the situation.  They've basically become storefronts for Chinese companies peddling their crap from so-called "British" companies.  You have to do some digging to find out the truth.

How has it come to this?  Probably because people are greedy.  They want everything as cheap as possible and that's exactly what you got.  But there's that old saying, you get what you pay for, which is fine I suppose, apart from the fact that the slippers from Matalan cost twice as much as the ones I had that were made in Europe a few years ago and they lasted much better!  I'm still waiting to find out what Matalan are going to do about this.

I do shop ethically where I can, but retailers and the big tech companies aren't making it easy.

My expectations for Chinese made products are spectacularly low. I can't find an alternative and I can't find something not 'Made in China' because none of the big retailers have the balls to publicly state where their goods are manufactured. Yorba Linda Concrete Pros
26/11 Janneca
0

There seems a lot of anger against China here, but simply cheap clothes and footwear is not going to be made in a First World Country.

Of course, I'm sure there are slippers (in the example) made in the UK.

Absolutely spot on Grumpyoldwoman and LancsLass. Wonder what part of China John V comes from though. I still see no solution to finding out quickly where you are really buying from. If only there was a plugin or something to do this for you.
29/12/20 Original author
2

Sorry I meant not highlighted very well, my apologies.
29/12/20 LancsLass
3

The problem is with Amazon it is highlighted very well as to where the products are coming from, itâ€™s only when you hit the pay button you realise whatever youâ€™re ,re purchasing is coming all the way from China, itâ€™s misleading.
29/12/20 LancLass
3

For those not aware, China gave up the covid hysteria months ago and is back to normal. Not so in the west where corporations and politicians are making too much money out of it to stop. When the coming depression begins to bite those who bought into the hype of millions might, could, possible die have only themselves to blame.
28/12/20 John V
-6

It's called globalization. You want cheap, you get cheaply made products and you buy them because western countries can't compete.
28/12/20 John V
-6

I know exactly what you mean; I find it very frustrating too. Ebay has been ruined by Chinese sellers. They sell rubbish at low prices, and when you search for a particular item you page after page of Chinese rubbish before you can find anything not made there. A good way of telling if it's Chinese is if there is a Union Jack on the photos. If there is you can pretty much guarantee it's Chinese!

I have had a couple of pairs of slippers made by Romika, a European company. They aren't cheap but they wear very well. I practically live in mine in the winter and they have hard soles so you can go outside. However, even some of their stock is now made in "Asia".
28/12/20 grumpyoldwoman
4

Making the most of a Chinese 'All You Can Eat' buffet