I moved up to Scotland to a small town near Edinburgh about six months ago and I recently made a shocking discovery that has chilled me to the very core.  A little bit of background first though.

Although I was born and bred near Edinburgh, I moved to England when I was around 18 to pursue a career and haven't lived back here for around 30 years.  Naturally, as a young lad I acquired a taste for beer in the south east of England and I later moved to Oxfordshire and then the West Midlands where I really began to appreciate it.  It was then when I started all grain brewing and spent many a weekend at beer festivals or on brewery tours.  It has become an important part of my life you could say, and the enjoyment of good beer has led my partner and I on many adventures where we have met many interesting people and found great friends.  Back in Scotland though, it would seem things aren't the same as they are down south and it's down to the way SOME of the pubs serve the beer. 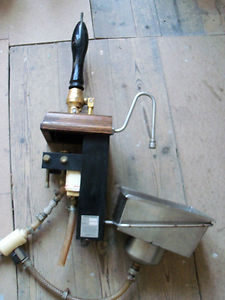 A little bit of warm recycled beer for you?

The issue I'm talking about isn't limited to Scotland and I've heard that it actually originated in Yorkshire.  It's still a fairly widespread practice there by all accounts just as it is here in Scotland.  I am referring to, of course, a system called 'Autovac', sometimes called return-trays up here.

Down in the south, generally when the bar person pulls a pint, a little bit of overspill may happen and that generally goes into something called a drip tray.  You've probably seen them, they're usually black and have a plastic grate on top.  The slops as they are called get chucked away at the end of the night, and so they should.  Gone are the days when the unscrupulous landlord would collect it all and funnel it back into the 'mild' barrel.  No that doesn't happen any more...  I hope.

The autovac system is a traditional thing you see, and possibly why some people still cling to it and offer up excuses such as "It saves wastage" and "It creates the perfect creamy pint".  Well there may be some portion of truth in this, but this doesn't make it right and doesn't make it a good practice.  For example, it was once acceptable to take a glass back and have it refilled.  That doesn't, or certainly shouldn't happen these days due to hygiene regulations.

How does autovac work?  It's quite simple.  Beer that doesn't go into the glass goes into a 'special' drip tray.  The beer is collected and fed back into beer line to the hand pull.  It doesn't go to the cask, which is a small blessing at least!  Nevertheless, it is still exposed to the atmosphere, a tray and then another line before coming out of the tap again.  The question is, would you prefer your beer straight from the cask or recycled a bit first?  In a busy pub it may be in that system for a short time, but there again it could be in there for an hour or two. 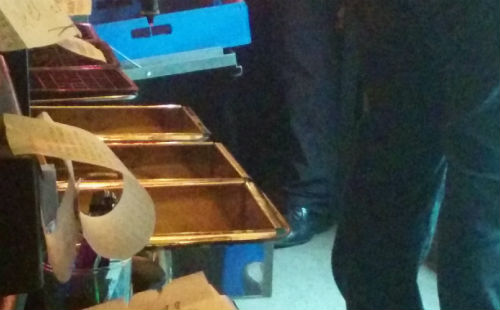 There are several worrying things about autovac which is probably why it isn't generally acceptable (except of course in Scotland and Yorkshire).  Consider first of all the hygiene issue where staff are involved.  I've been assured by 'fans' of autovac that staff are highly trained to minimise risk of contamination.  So that presumably means they wear rubber gloves or scrub up between pints then?  Beer overflows and they aren't going to keep their fingers out of the way EVERY time.  Then there's the glass.  How long has it sat around and how clean is the shelf?  Beer generally flows over the glass and drips from the bottom.  Then of course there's the tray itself.  Even if there is a filter of some sort anything can fall in there, including dust during the day.  What happens when the bar person has a cold.  You know how easily germs spread on a crowded bus?

Personally, I don't think these devices have any place in pubs anymore and I would argue that they are detrimental to the survival of pubs, particularly if ale drinkers know about them and surprisingly not many do.  You generally don't get to see behind the bar.  In fact it took for a gentleman sat next to me to whisper in my ear before I knew what was going on.  Funnily enough he disappeared rather quickly, presumably in case he was barred for telling the secret!

Autovac isn't going to save pubs.  I'd like to see these things properly banned ideally and pubs that still use them to be fined.  But if that's not possible, at the very least the drinker should be absolutely made aware that they are in use.  You can't see them, so put a sign up or something.  If the pubs that are using them are so in favour of them they won't be afraid to admit they have them...  or will they?

Even if there is a filter of some sort anything can fall in there, including dust during the day. What happens when the bar person has a cold. Bathroom Remodel Anchorage
03/11 Kim Clous
0

Alex, if you think there's nothing wrong with Autovacs then carry on. Most other people once they know what they are and what they do would rather not drink from them. You're not in the minority though, there are lots of people with low standards.
08/10/18 David
2

Absolutely, I have recently started working in a pub as a bar back / bar assitant and I have witnessed glass explosions. Maybe a glass has had a trauma and while resting it just shatters.
Where do you think all the tiny fragments go?

It is not unheard for a drip tray to get some dust, staff cough, glass shards etc.
Who would be mad enough to put their customer and reputation at risk?

Also hand hygiene is not always easy unless you are like me, responsible for all tap water drinks and jugs of water, in which case your hands will be often under a running tap.
Those same hands will be touching dog bowls and ashtrays and used napkins and occasionally broken glass. If the auto vac is authorised in certain parts of the country then so be it, but NEVER drip trays please.

Who ever is on close ensures trays are washed and dried, however that will not
prevent contamination during the day when all the above plus flies will be around.
10/09/18 DonnaM
1

flies, i have been in many pubs where the drip tray has flies around it, and quite often them small bugging little fruit type flies buzzing around them, and it's DISGUSTING if you are drinking the slops, I rest my case.
04/09/18 markie.
1

There isn't anything wrong with autovacs as such providing that staff are properly trained to use them. We use autovacs at my pub in Leeds and if you are actually pulling the beer correctly it should not be flowing over your hands (which should be clean anyway). Any other hygiene issues are just as common in any other method of dispensing beer. A dirty glass is a dirty glass and dirty hands are dirty hands. A member of staff is going to be handling all of the glassware, attaching nosles, tapping barrels and flushing lines which involves handling a number of things which will eventually come into contact with your beer. Autovacs don't have standing beer in the trays. The beer forms a seel below a metal filter and a plastic float. If the float is sticking or you have air in the line are the only times you may ever have standing beer in the tray and again that is down to training. How something that produces a better pint and saves a pub thousands of pounds is "detrimental to the survival of pubs" is beyond me. Questions about whether a member of staff has a cold or whether their hygiene standards are up to scratch are no more relevant when using autovacs than in cheffing, serving a gin and tonic, a glass of wine or pulling a pint. The risk of contamination is the same. People have circulated myths about autovacs for years and unfortunately some of them have stuck.
29/03/18 Alex
1

If Elfin Safety accept the practice that's good enough for me. The rules are already excessive and go as far as demanding four separate sinks in a Rugby Club bar because we wanted to serve sandwiches!
16/05/17 Charmbrights
-1

I'd be surprised if pubs can get away with this to be honest. Have you seen this yourself, or is it just hearsay?
03/05/17 MarkH
0