Like many people these days I do a fair bit of shopping online and for the most part, I'm pretty confident that when I've submitted my order I'll receive my goods within a few days, or if it's a busy time of year then perhaps a week or two.  However, you don't generally expect to have to wait from three weeks to a month, or even longer.

I recently ordered a DVD player online from eBuyer.com (which I can definitely recommend by the way), but forgot to also purchase the 8MB USB stick which I had originally intended to buy with the player.  Unfortunately I couldn't amend my order at the time, there was a good reason as sometimes it is possible to do that.  Anyway, decided I'd just find somewhere else cheap that had free shipping because basically I couldn't stand the idea of paying for shipping twice, even though it was only another few quid.  Well that will teach me, because I still haven't received the memory stick and I have been watching movies on the DVD player that eBuyer sent me for the best part of a month now.  If I'd just ordered with them I'd no doubt have got the USB stick a few days later along with the player.  I was very patient to begin with.  I waited two weeks before even attempting to make contact and then sent them an email. 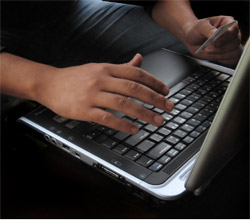 This particular online retailer's website looked the part and had all the right information.  There's even a host of different contact email addresses (one phone number) and plenty of information on deliveries, payments and orders.  It's the sort of thing you'd expect and I didn't feel uncomfortable placing an order with this company, but they're proving to be very slow at communicating as well as slow at delivering.  It's been about a week since I emailed them, correct email address used and order number included in the subject line as suggested by the website.  Looking at my account the order still says "Awaiting Dispatch.  Will be Dispatched within 2 days."  It's been saying that for a very long time though.

I have also called the number on the website and as expected, it was a voicemail service whereby you leave a message and someone will be in touch within 48 hours.  Perhaps this is a one off and I'll receive my £10 item sometime next week, there again maybe I won't.  Either way I will not be giving this particular company any more of my business.  I know it's a relatively small value item and the shipping was free, but does that mean my custom is less valuable?

I've had one or two bad experiences shopping online in the past particularly around Christmas time.  Once I actually received an incomplete order with a credit note inside telling me that one of the items was out of stock and that my payment would be refunded (well that's something at least!), but my point is there was no prior communication either at the time of purchase or when my order was being processed.  As you can imagine when you're waiting for gifts to arrive and some of them just aren't there, you've then got to start shopping again - something that's quite irritating if really don't like shopping in the first place.  It's actually why I prefer to shop online...  to avoid the hustle and bustle of the high street.

Online retailers need to their customers a bit more seriously.  There's plenty of competition out there and we'll take our money somewhere else if we don't get satisfaction and a prompt delivery.

If anybody on this site is debating buying gel badge overlays for their Ford cars from a web site called MOTOR MODZ be careful. They take your money with PayPal and then don't supply the goods. There is no way of contacting them, there is no info of where they are. Total rip off pikies. Pass the word around Please.
21/06/19 Rip off UK.
7

W.I.M.B. Paid for new "Kindle Fire" money was taken instantly on Saturday. I received this email this evening. We've tried to deliver your parcel, sorry we missed you. We left a call card, but to speed up delivery you can call our courier on Blah blah. Here is your tracking number, JD Blah Blah you can track your parcel by visiting www.myyodel.co.uk. I looked for card, there was no card. I tried to ring there was no answer.
30/04/14 boblet
0

Where is my book?

Abe books advertised that an online book seller could send a book within 1-2 days if I paid for its delivery the premium rate. I paid that rate. I placed the order midday on Saturday. It's now Wednesday afternoon 4pm. My book still hasn't been delivered.

Has anyone who subscribes to this site ever been ripped of by a mail order catalogue? I sent a postal order to STUDIO catalogue last June for a pair of trainers, and when they didn't arrive I emailed the company. They emailed me back and told me that the order had been delivered, and then I received a bill for the goods in the post. Over the next 3 months I got several demands for money from them even though I kept telling them that I had paid, and where were my trainers? Finally I had a letter in the post saying that if I could produce proof of the postal order, I could get my money back, but unfortunately I couldn't find the slip of paper that you get with postal orders. I don`t know whether to just accept that I've lost the money for good, or carry on trying to get it back. It was only £20, but as I'm on benefits I can`t afford to just throw money away. I think the people who work at STUDIO are either incompetent, or just plain dishonest, I can`t decide which, maybe both.
04/10/12 Hairyfairy
-6

well alot of the delivery time hold ups over christmas are to do with royal mail its not always the retailer, I purchased a zippo from online store pocketgift and had it engraved, and they still managed to send it the same day the order was placed only for royal mail to take a week to deliver it, when I phoned they were able to provide tracking that proved it had been sent the same day just royal mail letting the system down as usual.
24/03/11 tom bradley
-12

Wait until the weeks before Christmas, order around then and wait to REALLY see some slow delivery. Some companies don't care at all as long as they get your money.
04/11/10 P.D.
-8

Fed up with these companies

Amazing, my goods have finally arrived nearly a month after ordering them. I certainly won't be ordering there any time in the future.
21/06/10 Fed up with these companies
38

Fed up with these companies

I'm still waiting on my 8MB usb stick, no contact has been received whatsoever. I'm emailing them again today but not about to hold my breath waiting on a response.
17/06/10 Fed up with these companies
-3

I suspect that many "online" shops are people in their backrooms, no actual "stock", they order it when they get an order. It all works if everything works, if it does not...
12/06/10 Timelord
-8

Used to be cyclist

If you want redress, many companies now monitor Twitter and sites with public complaint forums like MoneySavingExpert. If you complain online there, these companies will often contact you to see how they can sort out the problem.
Apparently BT do this, but I don't know who else does. Don't know about Ebuyer.
11/06/10 Used to be cyclist
5

This is a sore point in my house... I ordered a Tshirt with amazon once. 3months it took!! the same tshirt took 3 days on play.com.

I have only ordered food once from Tesco, it turned up and about 40% of what I ordered was there, I had "alternatives" for the rest. If I wanted alternatives Never again!

And online business is so quick to take money off you - but man do they take weeks sometimes months to return your money!
11/06/10 Derek
-6

Tesco is worse. I was told an item would be dispatched in 2 weeks... Nothing happened. Sent email they wanted another month. Tried to cancel and it said it was in the process of being dispatched so I had to send email for it to cancel. They cancelled but it still showed on website. Sent email to confirm cancellation. Got an automated email weeks later to say it had been cancelled and order was removed from account. Bought item a penny cheaper somewhere else. (Plus nectar points)
10/06/10 James G
7