Hell is other people, both on the Internet and in the real world.   For starters, I am sick of online journals and blogs because they're all very self-centred and stupid.  I don't have time or the patience for childish games or tedious things that make me wonder why I even spend my time doing them.  I don't have time or interest to post pictures of me, or pictures of myself and my significant other on our trips or wearing our daily attire in order to create the impression that we are somehow having a great relationship and our clothes are cool in a very off-kilter way, which means we are still hip and know how to relate to the young crowd.

I don't take well to the idea of plastering my visage on journals and websites in order to impress a mostly blind and stupid horde of web people I don't even know, and, if I knew them, would then rather not.  I don't care to write about myself in the past, present, and whatever tense, about my daily life and the things I've bought or the things I will buy, or else something about where we're going out, or advertising how wonderful a couple we are because we go out together so much and so forth and so on.

There are so many people I've learned to avoid because they are doing the same as everyone else: posting their pictures and bragging about this and that they've done, and where they're going, what shrink they're seeing, ad nauseum, ad nauseum.  Even the few one or two people who might have just a little speck of genius must write entries about seeing the latest Johnny Depp movie, because he's so cool and everyone has to still relate to the world of common men because they want to be liked and hey, they've still got to pander their "Goth" or whatever you want to call it stuff on whatever bland and uninteresting online CD stores they're using to sell their atrocious CDs on. 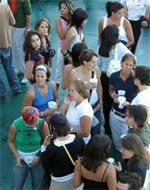 I encounter the same problem, really, in "real time" just as much, and, being surrounded by commercialism and consumerism and it's pretty hard to not be disappointed all-around.

I can't go to the store anymore to buy a CD, even if it actually does interest me.  This is because I know at the end of the day the "artist" only wants to make lots of money and/or become popular. Once something is popular it no longer interests me.

I can't buy fiction anymore, because it's all the same regurgitated crap, over and over and over... really... when does it ever end?

Movies?  Forget it.  The only thing I can stand nowadays is Asian horror; at least it's honest somehow, and lacks in all the big gore and explosion that filmgoers need to satiate their inability to cope with real life.

Does everyone want the same things; money, popularity, and adulation?  I find the latter two despicable, while money, if used creatively, can be helpful, specifically for paying bills and so forth; but popularity and adulation, well, if you're going to sell yourself, then why not come out into the open and just admit it?

I don't want to hear about how smart you are, or how popular you are, or how you have this extensive history of chumming with all the right people and you're now 40 or 50 and trying to fit into the same leather pants from yesteryear.

no dickens, but they may have say 25 friends and 25 family..... I am still in contact with about 50% of my school year 4 years after leaving (thats about 75 people) we still meet up, phone each other etc etc, attend each others weddings, sadly a couple funerals, christenings etc etc. Oh, and we then have family who are scattered rounf the country.
Mum, Dad 2 brothers, one's fiance. Uncles x 3, Aunties x 2, cousins x 5 2nd cousinx 1. And then we have the other halfs family. All in all thats about 25 other people. So excuse me for wanting to keep in contact with friends and family. Its free, rather than mobile phones, which can be expensive to phone home when abroad.
21/10/10 harumph
-12

Hear hear! Saddos the lot of them. Are they afraid of having to 'speak' to people face-to-face? That they wouldn't be liked if people saw the 'real them'? Would rather have a ten minute meaningful conversation with someone I know rather than weeks of pathetic and random sentences between, lets be fair, people who could be right nutters!!
25/09/10 Jo
-3

I odo agree with the main point here..to a limit.

I see no harm in facebook. It's a good way to stay in touch with my family on the otherside of the world and share photos with my family and friends. Way better than emailing as it's more immediate. If they don't want to see them then fair enough. They don't have to look at them. Where's the harm in that?

What I don't like about certain people is the amount of pseudo intellectuals. People who think they are better than everyone else smiply because they (think) they know more. There are bad and good in everyone. And I'm sure you are one of those people W Kingsman. I obviously don't know that, but you too are a person.
03/09/10 sonny
-24

Gainsborough lad, thank you for your supporting comment to Dickens. I am, of course Bukowski but I think I lost the thread of the original posting but I stand by what I said.
You're right, this is the only site with any meaning and I find it difficult to give up.
Hope you and your family have a lovely christmas...
25/12/09 Dickens
-17

Dickens, "no one has 50 - 100 friends" your bang on right there, some of my old school mates have three hundred or more on facebook, I just find this facebook so absurd.

Well here I am doing it, writing a comment on a forum (god I hate that word). I loathe computers and the internet.
I only got hold of one to try and find a job. Once I've hopefully got one I'll throw it out the window. Tw*tter and facef*** ought to be outlawed. I too am not interested in reading that someone has had a 'caffe late' or that they know some 'happening people'. No one actually has 50 - 100 friends, nor will they ever in their lifetime.
25/12/09 dickens
3

I agree with you, unfortunately the mass won’t, don’t and couldn’t. They would see us as the “weirdoes”. In my view its the normal people who are the freaks.
22/10/09 Ben
-3

My gripe concerns people who are too "In your face".

About ten days ago a new starter joined my workplace. Whenever somebody new comes I smile, say hello etc to make them feel welcome and comfortable.

I did this with a new guy called nick, however I now deeply regret doing so. He has attached himself to me and seems to think we are "great mates". He follows me into the canteen at lunch breaks and has to sit right next to me and actually turns his chair to face me!
He tries to team up with me and says "we make a good team don"t we", despite the fact I do all of the work and he just moans about how hard it is.

Im trying my best to distance myself from him but he seems to be extraordinarily dense. The worst part is I think he may be one of those g*y men, I have nothing against g*y men but I do not want one so near and close.

MikeP(roctologists worst nightmare) in your inevitable comment on my comment try to make your invective witty and stylish rather than sociopathic/psycopathic. Who knows? you may then acheive your dream of becoming a well known blogger. Or even better still, perhaps you have spotted a grammar or "syntax" error and can then ignore me.
26/09/09 Hicks
-6

My gripe is people at work who seem to spend a Large proportion of their Time asking other people questions. The second I walk through the door it seems as though I am Bombarded with questions, " wheres .....?", "whos..........?", "whats......?". I am not even a manager or anything just an ordinary employee.
If you work in a place with Lots of other people, an office, shop, factory or whatever, observe the people around you. You will eventually notice that it is always the same two or three goofballs who walk around constantly pestering others with incessant questions.
MikeP(roctologists worst nightmare), In your comment to my Comment try to use some style and wit to Insult me rather than sociopathic ranting.
22/09/09 Hicks
-5

the fact that you know what you dont like tells me your an induvidual, yet you still are comparing yourself to others with what they do ... mmm interesting! You are right about movies and films though. There is in fact only 23 possible story lines which all movies and books are based on (boy meets girl boy falls for other girl etc) you should do a media degree in advertising, that would surley do you head in, all the messages behind the messages behind the message to get you to conform.
Mind you if your into books I recomend a book called Yes! by Noah J Goldstein Phd which is all about the science of persuasion ... you'll find it insightful
19/07/09 JFrankinstein
4

Why don't you go and knit yourself a 'cardy', you'll feel a whole lot better.

You wrote - 'Movies? Forget it. The only thing I can stand nowadays is Asian horror'.

Each to their own I s'pose. On what inter-galactic planet do you watch these movies Wendy?
07/10/08 Wake Up Boarhead!
-14

Your information and personal data on servers

To gripe or not to gripe, that's the question?

Technology moves on, but are things better?