"Oh here it is, Merry Christmas everybody's having fun" sang Slade's Noddy Holder.  He should be sued for that in my opinion.  Am I having fun?  I don't flipping think so!  This whole annual saga, which I'd much prefer to call winter seasonal extortion, is now called 'Happy Holidays' by some politically correct souls with a very odd sense of humour.  This only takes the essential religious shine off what is otherwise a seasonal of absolute hell.

In fact, it's been Christmas since October in most of the retail outlets.  From the first dropping of Autumn leaves, I enter a shop and the shelves, which normally contain my usual staple items, have been moved to god knows where (usually under the counter where I can't find them) and instead they're stacked with overpackaged, overpriced, fancy Christmas food items.  That means miniscule portions of food or chocolates wrapped in enormous fancy packaged boxes, with Santa on the front, and a bigger price tag than the national debt.  No wonder I need to remortgage the house to pay the gas bill and have to live on baked beans all of January!  That jingling has nothing to do with bells and more to do with my hard earned cash filling up the tills.

Then there's Christmas pressie buying.  Boring!  Traipsing around the high street stores in sludgy snow, barging into frustrated shoppers all with sore feet on that annual quest for that perfect present for aunt Mildred, who I would never give the time of day for if it wasn't for the festive season.  Boring cow! 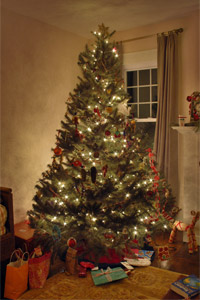 Once you've spent a fortune on a bunch of undeserving individuals there's the pressie wrapping.  Yards of sticky tape stuck to the new leather sofa, leaving residues of glue that won't come out; lost scissors that always open out and cut a hole in a favourite cushion, and awkward shaped presents that take a whole roll of wrapping paper to conceal making the present cost twice as much - and it still pokes through the tissue like wrapping paper.  There's only one thing for it: a pint of Sherry to dull the pain, otherwise I'd end up in the loony bin singing Rudolph The Red Nose Reindeer with Nurse Ratchet.

up at dawn to put the turkey in the oven...

Finally, there's Christmas day food to prepare.  That means hours of sweated toil in the kitchen, slave labour not seen since 19th century workhouses were abolished, making bread sauce, Christmas pudding, perfect roast spuds, getting up at dawn to put the turkey in the oven, sprouts that everyone loathes, greasy gravy followed by heavy Christmas pudding and brandy butter specifically formulated to ensure that my jeans won't fit me for at least two months into the New Year.  Not unless I bop along to that daft celebrity fitness DVD that aunt Mildred bought me for Christmas.  Where's that hangman's rope when I need it!

After Christmas, along with the rest of the UK population, I'll have no energy left to do anything except spend all day on eBay flogging unwanted, rubbish presents.  Besides, I can't move or go anywhere because my bum is now the size of Table Mountain and won't shrink to its normal size until March, at the earliest.

I just wish, amid all of this misery couched by phoney forced jolliness, I could auction aunt Mildred.  Now that would put a smile on my face and make for a genuinely Happy New Year and make those endless dry, turkey sandwiches seem worthwhile after all.

Hope you all have the same.. A happy Christmas and New Year, that is.

Why are your family arrangement so poorly organised that Mildred needs a present?

Seriously, you sound like the one who is suffering so take some action, why do you feel under any pressure to buy obscure relatives a present, mine get a card and that's it. If they don't send a card well, they don't one next year, it's not radical. I spend money on close friends and relatives, but I don't feel any need to put pressure on myself, so I enjoy Christmas.
17/01/18 Timelord
-1

I don't hate Christmas but I really hate all the blue Led lights that seem to be everywhere now. The pale blue/white lights are so cold and unfestive, and the deep blue LEDs are so aggressively bright that I can't even look at them for long.

That kind of blue light is not a warm or welcoming colour. Before some fool started to use it for Christmas lights it was either a technology colour - think those gadgets that electrocute flies in take aways or stand by lights on equipment, or as ambulance or police lights - attention getting, retina burning lights that scream "get out of our way."

I asked a local shopkeeper why he changed to blue lights last Christmas and his answer was "well, everyone's got them now."

I love christmas it's great isn't it guys? Surrounded by family and friends? A huge blow out Christmas dinner, queens speech, bad tv, bad jumpers.......yes I love it.
21/01/12 Mr hanky
-6

Good King Wenceslas looked out, upon one Christmas morning,
'Twas scarcely any snow about, because of global warming,
Despite a month of constant rain, a hosepipe ban remain-ed,
The water leaked from ev'ry main, but shareholders still gain-ed.

Up spake the sov'reign's lowly page, who had been getting restive,
"No snow, no tree, no Christmas lights! It doesn't look too festive!"
"There'll be no lights!" the king replied, "that custom has been ended!
The land's in thrall to Muslims now, and they might be offended".

I agree, HBNot. I got the impression that Jamie would coat a peanut if he'd had the chance. I like some fancy food at Xmas, but I also like it punctuated liberally with straight up, simple, unmeddled with food too.
05/01/11 Grumpy xx
14

I've a tedancy to agree with "Grumpy xx". I didn't watch the Jamie Oliver thing because the lead-up introdutions to the program put me off completely. Self-indulgent, glib, crap. The whole experience may have been a warm and wonderful thing, But to me it looked like two selfcentred w@nkers who get payed thousands to eat and share an unlimited budget on food.
I'm not knocking xmas but as with anything in life you cannot let one day rule you.
03/01/11 happybunnyNOT
-3

DSG, LOL, my sentiments exactly. Well done! Your posting has cheered me up a little - I'd forgotten that it was possible.
22/12/10 miserablemoaninggit
5

Christmas has been cancelled and the fattened goose has been replaced by a halal chicken this year. Carols have been censored, tinsel outlawed and even our trees are being replaced with giant cones because of elf'n safety. This is what 13 years of Labour has done to Christmas.
22/12/10 DSG
3

As if banning the little baby Jesus from the nation's stamps wasn't enough, our own children are being stopped from the traditional yuletide activities of eating chocolate until they're sick, demanding toys that have already sold out and singing carols out of tune and at the top of their voices for the next three weeks. A school carol concert in Dudley was scrapped because a mean-hearted resident objected to the application for an entertainment licence by the organisers.Elsewhere, primary school pupils in Wallington, Surrey, have been told that instead of singing the traditional Twelve Days of Christmas song, they will be forced to perform a calypso version that changes the line "partridge in a pear tree" to "cornbird in a palm tree."Rocking Around the Christmas Tree has become Rocking Around the Shops in an effort to support the schools' "inclusion policy".Pah! What utter PC b****cks is this!
22/12/10 DSG
-7

Dear Tendercookie, you would be extremely well fed and watered if you came to my home - at any time of the year!
22/12/10 toughcookie
-9

Christmas nowadays has nothing to do with "Baby Jesus" or ancient pagan rituals. As you so rightly point out "Grumpy" and as, indeed, I have pointed out on previous gripes, it is all about: *** RETAIL***. Towns and cities don't put up Xmas lights for the mere enjoyment of its residents; is to encourage people to SHOP. AND SHOP, PEOPLE WILL GLADLY DO. They have to do it. It's expected, and television ads brainwash them to do it. The masses have always been manipulated like flocks of sheep and will go on being manipulated. The "church" used to tell them what to do, now it's the media. (I wonder who is in control?) Anyway; I refuse to be a "sheep" and will enjoy a quiet week off work doing what I want to do and not what "others" tell me to do.

I just do not understand why the supposed birthday of a miracle baby should have become such an obsession. I do understand that there are many people who make a good living by parting fools from their money on the promise of a better life after the fools have died, but all the commercial cashing in should offend the Christians. After all the money the laity spend on presents for each other could be better spent on more fine clothes for the high-ups in the hierarchy and solid gold chalices "to the greater glory of" their imaginary friend.
22/12/10 Charmbrights
-7

You can make Christmas as relaxing or stressing as you wish, I bought 3 small presents for the kids but have yet to wrap them up...I'll treat ourselves to a take away as I'll be working till the last minute but I did make my own cards, one at a time to give out to dear friends and neigbours. What's not written or packed or cooked is irrelevant, Christmas is a time to reflect and to be thankful for the friends and family that we have. Christmas is what you make of it not what the advertisers want you to believe. Their job is to sell a dream, make your own, chill out and good health to all.
22/12/10 Clarite
-8