How I just hate it, when I get on a bus and scramble to find a seat before the driver sets off and I end up tripping over a bottle.  People just dump them on the floor as they can't be bothered to take them with them and find a litter bin.

It's not just bottles, either.  People dont seem to care what kind of litter they leave lying around on buses.  You get bottles, newspapers, drink cans, sweetie papers and of course the dreaded takeaway cartons. 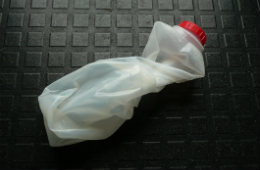 In fact just recently I watched two teenage boys eat their way through fish and chips, then just throw the greasy paper and polystyrene trays on the floor.  This is just perfect for someone to slip on.  Nice one you idiots.

Yes, I know, there isn't a litter bin on the bus.  Probably because people used it to dump ALL their household rubbish in them rather than inconvenience themselves by taking it home and putting it in their wheelie bins.  Well thats the mentality of some people for you!

Still... I would like to make a request of all those teenage slobs, lying on the seats with their feet against the window, on the opposite seat etc.  Yes, you know who you are dont you?  Id like to ask you to please, just take their rubbish home with you when you get off the bus.  Its not just unsightly, often smelly and possibly unhygienic.  It can actually be a danger to people who arent so sure footed.  For example an elderly person might trip over your discarded bottle and have a bad fall.  It might be YOUR nan, how would you feel then?

I find this extremely annoying too - the worst thing is a plastic bottle constantly rolling about the floor of the bus banging against your feet. No matter how many times you kick it away it keeps coming back til you give it one final BOOT in frustration and it smacks off the feet of another commuter. aarrrggh. Selfish people do my head in!!!!!
20/03/13 Magic Fly
-5

Check out the wedsite of Quinte Plastics Ltd www.quinteplastics.com there is an answer to the litter problem on city buses & coach travel. Pass the website on to your city transit company.
07/05/12 DGMM
-8

Today I had the misfortune of falling down the stairs of a double decker bus. The cause of this was a single sheet of newspaper (the metro) being left on the top of the stairs which caused me to slip all the way down to the bottom, and possibly injuring another passenger on the foot with my elbow on the way down. I'm a fully grown man, so i didn't feel any pain initially afterwards but i'm sure i will in the morning, Imagine if this had been an elderly or pregnant woman...Note to all bus companies Nobody wants to read your crappy papers, they get chucked around when people have finished reading the crap you print, it sickens me when i think of how many tree's are cut down to make these pointless papers....rant over
14/11/11 injured bus passenger
5

I was under the impression that all the rubbish had been dumped in Wales many many years ago before the formation of the United Kingdom.
17/07/11 warez the taffy
1

I have a solution to the problem of litter on public transport in England & Scotland..Dump all the rubbish in Wales instead.End of problem.
16/07/11 Orinoco Womble
-7

Fair doos Zena, I never thought that one could stand on it and just slip on it. I was coming from the angle that ones foot had to be underneath to trip up.
14/07/11 Trebor
-6

Just thought I should say, I'm 18, I put all my rubbish in my bag and take it home. I do know of people who don't do this though and depending on what it is I sometimes offer to take it and bin it for them (I won't take greasy stuff, or stuff that still has a lot of food in it, bit of a germaphobe :P )
11/07/11 Connor
-3

It's not just the bus or train. Litter louts are rife. This seems to be worsening over the last few years. People throwing cans, cigarettes, takeaway cartons, even used condoms and tampons out of the car window.

People passing my house stuff bottles, waste, cans, wrappers and other things into my hedge.

Not to mention dog walkers who encourage their dogs to defecate on my drive or lawn.

Trebor - someone who has poor sight can easily tread on an empty bottle and go flying, hurting themselves badly.
08/07/11 Zena
2

Its all about education of the hooligans that drop litter. In rural areas the lanes are polluted with wrappings and packaging from all the take-away outlets, much of which takes years to degrade and all of which is a danger to wildlife and farm animals. People must realise that unless they stop dropping litter out of car windows etc, our countryside will be spoiled for ever. STOP IT because the patience of responsible citizens who collect up the litter will run out.
08/07/11 Annoyed Rotarian - Cumbria UK
14