Taxi drivers are quite useful sometimes because they get you to and from the pub and are a lot better than standing around in the rain waiting for a bus, that's for sure.  However, in my opinion some of them tend to take liberties that they really shouldn't.  I know this doesn't apply to EVERY taxi driver out there, but in the town where I live I have become increasingly aware of it.

First we have the guy who thinks he's on a race track.  These taxi drivers will be moving off just before you shut the door and will usually take you to your destination driving at approximately 50% over the speed limit.  These people don't care how pleasant the trip is and they don't care that you are flung around like a sack of potatoes in the back of the cab.  They're on a mission to drop you off as quickly as possible so they can head back and get another fare.  The chances of a bit of friendly banter from this taxi driver is almost zilch and you get the feeling he either doesn't like the job or would rather be doing something else.  Well it's fine not to have a conversation, but please get me home in one piece and there's more chance of that happening if you actually stick to the speed limit! 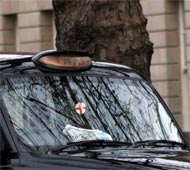 Next we have the taxi driver who is quite obviously at home in his cab.  He's got the windows open and the car stereo on full blast so that he can barely understand you when you tell him the destination.  He somehow always gets you there though and at least doesn't break the law.  However, he's in HIS home and since that is the case then it is obviously alright to smoke there, regardless of the fact that technically a car is an enclosed public place!  He's a bit of a cocky jack the lad and will think nothing of organising his personal life en-route either on his mobile or by yelling out the window to people he knows.

Finally, let us not forget the taxi driver who knows best.  Yes I'm sure some of you DO know the best way to get from A to B and for that I am grateful, but I also know the town in which I live very well, so if you don't mind I would rather you took me home the way I WANT to go instead of deciding for me.  By the way, when I said "Somewhere along here will be fine...", I actually meant somewhere along here and not half a mile further down the road!  I know you need to pull over somewhere safe, but anywhere along this stretch of deserted road would have been fine!  Oh hang on a minute, you needed to make sure it rounded up to the nearest tenner!

I never get a taxi that has a metre as I feel they will always take the longest route to get more money out of me, I also never pay till I am dropped at my destination i prefer ones with set rates so I don't get scammed
21/10/14 hi
0

The post at 11:36 on 27Dec was of course not by the real Fred E. Not posted much recently but still attract the attention of impersonators!
27/12/13 Fred E
1

Fred E, has it not occurred to you that people are laughing at you, not with you! I'm sure you must have a smattering of common sense to realize this.
27/12/13 Thomas
2

Well I think it works both side. Where we should criticise cabby some time I feel sorry for these guys. Some time they have to go through awful stress because of customers. Many customers simply dont pay them right fare so they try to rip off next one and some time they get such a verbal abuse unbelievable many time they are life savers but still I won't choose to be a taxi driver but still I appreciate them.
27/12/13 choose private hire
-1

London black-cab taxi-drivers are good-for-nothing and lazy. Whilst it is common practice in all other European countries for the taxi-drivers there to get out of their driving seats to load your luggage into their car boots, the London black-cab taxi-drivers refuse to do this. They sit fast and do nothing. Who the damn do they think they are? They even switch their meters on whilst you are loading their incredibly poorly designed vehicles: that's nothing but sheer greed. and they are expensive to use anyway. I sincerely hope the economic downturn sends them off the scene into economic oblivion so that a proper and competitive taxi-service can trade on the streets of London, and that we are rid of this leeching cartel.

Who needs a taxi-driver with the "knowledge" when the world has satnavs? They are obsolete, and should go into extinction.
08/11/13 I Hate Black Cabs
1

The mission of a taxi driver is to screw you for as much money as you have in cash.

London taxi drivers are a scam. They have a monopoly. They operate a protection racket: protecting their wages and taxi rates, which are outrageous. They are parasites haunting airports, and London railway stations and streets. Anyone with a SatNav now has the "Knowledge" necessary to go from A to B in London, efficiently and minimum cost.

Their union operates a kind of Crony Capitalism with the local governments of London.

There is no competition. I should be able to haggle at the railway station for my ride.
28/04/12 Taxi Dermy
2

I not giving up, I just hope someone in authority is reading these posts, with a bit of luck this person will get whats coming to them. I hope that the private plate No.77 is investigated into, I know who it came from and it became passed to him which is too much of a coincidence for sure! These people have progressed from arriving with fairly old bangers of cars to practically brand new cars over a short period of time, have watched the progression to new kitchen, new front doors, holidays abroad etc etc etc., meantime, he has had prang after prang with his taxi, I would put it at 2008 start date, (probably planned) never even went to bed when he came home at 10am after being out since 4am, on the go all day, when did he get his sleep I often wondered, because he certainly was going about at all hours during the day! Not right that, when was he taking a sleep break? Never as far as I could see, I hope they are found out to be the scammers that they are.
02/01/12 cabbagepatch
6

Nice one,. aquire a private plate off a friend after being declared a bankrupt, use it for a while, then have a spate of claims, gives you new kitchen, front doors, holidays, new cars to name but a few all on the back of insurance, no doubt your mortgage was in with it as well, just how many more of you are there out there I have to wonder, your pal who passed on the plate no doubt did the same, I hope it all comes back to haunt you, scammer Private Plate No.77 Aberdeen.
02/01/12 cabbagepatch
-9

Makes me sick to think how this guy has duped his insurance company, he should have never been driving a private plate in the first place with a heart condition, he also did school runs would you believe!!! He makes me sick, I have watched his antics and know he is just a scammer, at his age, I estimate him to be about in his late 70s or even later, never even slept when he was going out between 4am and 10am spent the day coughing and spluttering in his house, I should know because I have seen and heard him. When did he sleep? I often wondered because he was going about during the daytime every day!!!
02/01/12 cabbagepatch
-3

Further to my post of 9 April 2008, this guy has had more prangs, and was scamming knew exactly how to doit, crash for cash, got his compensation payouts, now got rid of plate and aeriel. Anyone in Aberdeen seen private plate No 77? Never seen it since he got his payouts. Must be rubbing his hands in glee, holidays, new front doors, kitchen but to name a few, just knew how to do it did he, cannot believe insurance people could be so stupid, seen it a mile away what he was up to, using a hand injury and all that, pile of crap, seen him going about using his hand no probs. Wise up insurance companies the likes of him are out there to scam all they can and much more, And get off with it!!!!!
02/01/12 cabbagepatch
-1

disgruntled and let down

The worst taxi drivers are the ones who cherry pick their pick-ups by not showing at pick-ups if they have to get through traffic jams to get to them... then they advise their operators that they actually went to the pick-up and were told their taxi was no longer required....bare faced lies !!! Thankfully most drivers have too much integrity for this but be wary of bad eggs.... especially if using radio cars in southampton.... oops, did I say that out loud ?
30/11/10 disgruntled and let down
6

Do what I do - any taxi driver that drives badly, is rude or makes the enclosed environment so unpleasant does not get my fare. I simply say, 'Pull over here, please', and then get out, explaining why he is getting nothing from me.

Black taxis take the pee they break every rule in the highway code and get away with it WHY?

They do u turns in the middle of busy roads,they stop at traffic lights when on green to pick up a poor sucker, they stop on red lines,they stop on double yellow lines,they cut you up, they block roads by parking each side of the road,they pull out without giving a signal. I saw a car beeping at a cab cause he pulled out without signalling and the cabbie done the finger jesture then the next thing I saw another 2 cabs block this poor guy in so he couldnt move as they were so close to him I reported the numbers to the hackney company but nothing got done these cabs think they own the roads I HATE BLACK CAB DRIVERS
17/08/10 angry
-3