Why don't rival bus companies work together?  On the face of it that might sound like a stupid question but as a passenger who's waited at a bus stop for the best part of forty five minutes, I can tell you I'm not amused at the level of service.  My journey home could have been much quicker if the ticket I bought this morning could have been used on one of the 5 buses I've just watched depart for my destination.

I can't complain about the level of service if I'm just going one way.  I could get any bus within ten minutes, pay my fare and be there in no time at all.  The problem lies in buying a return ticket, because you are then forced to use the same bus company for the return journey and buying a single each way would work out much more expensive.

I'm pretty sure that this area isn't the only one with rival bus companies operating on the same route forcing the passengers to decide.  Surely it would make more sense to create a common fare and ticketing system so that you could use either company for your journey when you needed it. 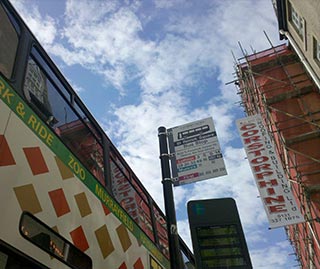 as the bus service improves, presumably more people would start to use it

There's a benefit straight away for the passengers as they aren't left waiting at a bus stop for ages.  But then if as the bus service improves (as it would if there are more buses available to you), presumably more people would start to use it safe in the knowledge that they could get on any bus to get home.  More passengers equals more money, isn't that a good idea?

Couldn't the local councils step in and help these rival bus companies work together?

I live in the West Midlands, the main bus operator is National Express and they do day tickets for their buses only but you can also get a day ticket to use on any operator for an extra 30p
17/04/17 Artful Dodger
0

Well in London it's another story. Thanks to the reign of Bo Jo the Great, the pound coins and pennies will be squeezed out of your pocket one way or another so it doesn't really matter how many bus companies there are in BoJo's land.
04/03/14 Nick
0

Because if they work together they will form a cartel and push the ticket prices up and up again. Therefore even though it's not convenient to have multiple bus companies running it is in the passengers' best interest that things stay that way.
04/03/14 Nick
0

Up until 1986 the vast majority of the buses were nationalised under the National bus Company (NBC), so you could get rover tickets. But then Thatcher came along and screwed everything up first with deregulation and then each NBC subsidiary was split into saleable sized chunks. basically a business has to make a profit, and under the Transport Act 1985 it is in fact illegal to continue to run a loss-making service! And you are not permitted to use the profits from one to subsidise another. All a great big balls up.
30/06/13 The Bus Driver's cat
5

Here ins Manchester they do have daily and weekly tickets that work on buses however they also have them for the individual companies and the ones that work on all of them cost more and sometimes can be cheaper just to buy 2 singles if you travel using more than one company.
22/11/10 Chris80
-5

I've seen bus rival companies in many parts of the country letting their passengers down because they don't work together. It's a sad fact of life. However, I can't realistically see how they could be made to operate any different.
17/08/10 JA
-7

And why do bus routes to airports cost double the price of the regular bus routes?

This is exactly the reason that London Transport came into being so long ago, because there were lots of private bus companies operating in London and the service was dire, just as it is in most places outside the capital now. The sooner governments realise that a privatised public transport system just does not work the better.
14/08/10 Nofanks
4

It works in London. Since the buses were de-regulated they are operated by different companies but the fares are the same on all TFL buses and Oyster is accepted on all London buses
13/08/10 another anon
-8

Unfortunately I can't see this happening as it would essentially mean to separate companies merging into one. I don't believe that any bus company would even want to share their customers with another as one company will most likely lose money as the other increases revenue.
13/08/10 James G
-7

I travel on buses all the time and unfortunately that is a pretty accurate description except that you left out that the wheelchair space is so full of monster sized baby buggies that disabled people cannot board the buses that were designed for them and they fill up the aisle so that no one can get to the seats at the back.
13/08/10 anonymous
-3

Bus companies working together in this way would not encourage me to start using buses. It seems that the few times I have used them, the experience consists of having to sit near foul-mouthed people, mobile phones going off all the time, empty cans and bottles rolling back and forth on the floor, frail and elderly people having to stand up whilst young mothers allow their young children to remain seated, some people sitting on side seats with their dirty trainers propped up across the aisle on an empty seat, and a generally somewhat 'threatening' atmosphere with everyone keen to avoid eye contact and blank out the cacophony of 'f-words' coming from the back. Meanwhile, the driver keeps his eyes on the road and ignores it all. I'll start using buses again when conductors are brought back, with the power to force the scumbags off the buses, to force the young mothers to learn some basic social skills and demand that their children give their seats to the frail and elderly, etc etc.
13/08/10 miserablemoaninggit
3

Free bus travel for under 22s in Scotland