Bus service in Milton Keynes, what flaming bus service?  It's in a right mess and if you are thinking of leaving the car at home and taking the bus I'd advise you to think again!

I've been working in Milton Keynes for over a year now and I usually commute to work on my motorcycle.  This has all worked out quite well even though it is more than 20 miles of single carriageway and the traffic is sometimes less than fluid.  One day however, this young lady wasn't watching where she was going and parked her four wheeled contraption directly in the path of my bike causing me to have a major bum twitch before striking the side of her car.

Okay, this isn't quite as bad as it sounds as I had a lucky escape and was able to borrow a bike from a friend whilst the insurance companies dragged their heels and finally sorted out some money for me.  The problem is that there is the odd day when I need to come to work by public transport, for example when the roads are too icy or if my bike is being serviced etc.

Getting to Milton Keynes from Bicester is bad enough as there are only two suitable buses in the morning; one these is at 7.15 and the other at 8.25.  The 7.15 bus gets me to the rail and bus station for 8 O'Clock and the other one gets me there at ten past nine.  This would be great if I worked at the rail station, unfortunately I don't, because I work on the other side of town up at Kents Hill. 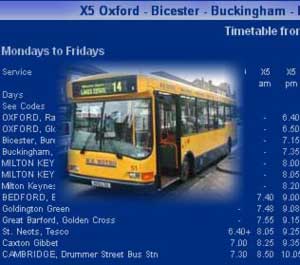 there are very few buses actually...

As most of the taxis charge around £8.00 each way I figured that its probably a good idea to check out the local bus service.  That was when I realised how bad things were in Milton Keynes.  I discovered that firstly there are very few buses actually go out to Kents Hill, and secondly the ones that DO are very infrequent with only one every 30 minutes at rush hour if you're lucky.  Whilst looking at the timetable I noticed that some of the buses, particularly on a Sunday only run as every two hours  Not exactly a flexible user friendly bus service!

Wasn't the big idea was to encourage people to ditch their cars and use public transport?  Well they're not doing very well here in Milton Keynes are they?

I don't know when they will sort out public transportation in Milton Keynes. Especially Bus 8 it's is so unrealiable. Can you believe bus not showing up on a Monday morning not only one but two buses going to Rail station. This was between 08:58 and 09:15. In the afternoon the the 14:38 did not turn up. I left to take a taxi at 15:00 .
11/11 Jay
0

What is happening to the no7 bus service of late? On two occasions I have waited an hour and a half for the bus as two didn’t turn up and the third was 10 mins late
03/09 Dee
0

What is it with the MK Bus Services? Recently we have seen by Arriva that the 2 service now terminates at Grange Farm not continuing to Westcroft, and the 8 and 300 have been reduced in frequency. Also the 1 at every 30 minutes with a minibus is not suitable, it serves high density estates and is always completely full, and travels a fair distance (Newport Pagnell - CMK - Oldbrook - Hospital - Bletchley - Newton Leys). Not a city service, they have a better service in Kettering and Corby!
03/07/17 Ban Arriva from MK
3

I used Bus Number 2 (Service Number 2450) this morning from Grange Farm to Milton Keynes train station today because my car was going in for service.

I would like to inform everyone that I have never been treated as a sub-human like that before. I innocently didn't know that you have to have exact fare (apparently) when you buy a ticket. I had a £10 note and the driver started shouting at me and being abusive. This came as a shock to me and the other passengers were appaled, mosty of them came to apologise to me at the train station. The driver then started to drive away from the bus stop. I almost crashed my head against the handle bars because this was done so suddenly. Again he kept on abusing me. He then proceeded to stop the bus in the middle of the road and said I should get out if I didn't want to sit down. I never refused to sit down - and he never gave the time and chance to do so. Other passengers then pooled together to get me the exact fare required. Thank you to all you nice human beings - I paid them back at the station. I calmly asked him to apologise when I got to my destination at which point he said he couldn't be bothered and had better things to do. I would like to know what better things does he have beside talking to his customers in an acceptable way?

One of Arriva's policies is that passengers should not abuse its staff. So is it ok for Arriva staff to abuse customers? I am fuming as I type this - I have never been treated like that ever in my life. I want to know what action they are taking gainst this driver and to ensure that this never to anyone else again. If I am not convinced I will take this up with the regulatory and transport bodies including my MP. Frankly I don't think that driver is not fit to provide any customer experience for MK residents, unless if the company doesn't value customer service as a critical part of the business.
11/07/14 Von Mags
2

Milton Keynes is a strange ungodly place. The only other place I can compare it to is Northfleet and certain parts of East London. The only redeeming feature is that they have supurb Kebab and chippy, and the sidewalks dont got pothole
21/06/13 Cornish Roy
-1

Milton Keynes is the worst place in the UK. The people there are odd and boring and have extremely noticable BO. The majority of them have bad breath and are fat.
21/07/12 Miltonpigs
-7

Bus number 1 did not show up. I have waited for freezing 40 minutes. They shouldnt be putting it on timetable if it wouldnt show up. What a piece of shit!!
20/10/11 Red
-3

Absolutely with you on that Claire. I used to 'try' and get around Milton Keynes on a regular basis but found the public transport there very frustrating indeed. It's a town designed for car drivers I'm afraid.
22/09/11 Edward
-15

In summer this year 2011 the bus driver wouldn't stop for my son to pick him up from school, text me to say what happened so i waited at the bus stop, at the other, end and confronted the driver, he said "you got a car, you should pick him up from school!! ) We, the public, are paying his sodding wages!, the gaul of the man.

Then this week the bus taking my son to school didn't turn up, he waited 20 mins for the next one, that also happened a couple of days ago, and the same bus, when comming back is supposed to stop at Two Mile Ash school, but because of the horrendous parking by parents at the school the buses can't get past the school at kicking out time (15.30) , so because of this the buses have been bypassing two mile ash altogether! But they don't put this info on the timetable on-line! My son said 2 women got very irate with the driver cos he didn't stop at the school and they had to pick their kids up.

Well, actually, since they re-organised the busses a couple of months ago, for us in NORTH furzton, it's worked out pretty well, instead of one number 7 bus coming every half hour, we now have the 7 and the 7a coming every 10 mins! But their are winners and losers, north emerson valley gets NO service, it hasent for 3 years since they removed the 9 and 16 routes, but i'm not complaining, ever since they re-organised and modernised, it's been great!!!
10/04/11 Stuart Westley
-8

I note the comments of people living in Olney1 Be grateful you don't live in Emberton since last year all buses to MK have been stopped. In a village where the percentage of senior citizens is much higher than the average this is a disgrace.
11/03/11 MJ
-2

METRO BUSES IN MILTON KEYNES WERE ABSLOLUTLY APAULING. I could not believe it, today, 01/08/10, I got the bus from the city MK at 18:07 on the 8a. I was the only one on the bus. After about 10 mins we got near to shenley lodge and the stupid bus driver stoped in the middle of the lane, put the emergancy lights on and started haveing a consversation on the phone! I could not beleive it. A long time late I accidentally pressed the stop sign and the bus driver was shouting at me. I was absolutly appauled and I want to make a formal complaint!
01/08/10 Keturah Johnson
0