Dolphins and whales on the verge of extinction, thats what I think we are looking at here if things carry on as they are.  Over fishing, particularly that of dolphins and whales does need to addressed before it is too late.

It's a beautiful sight, a clean clear blue sea teaming with fish and wildlife there for everyone to enjoy and benefit from.  It is just a shame that it won't be that way for much longer and the legacy that we will leave our children is a world of polluted seas and fish, whales and dolphins hunted almost to extinction.  It makes feel sad, and extremely angry when I think of the fishing, or rather overfishing practices of countries such as Japan where there is no regard for world fish stocks.  Let's not forget Europe, where overfishing is also common, and we should know better! 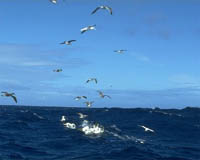 Around 20,000 dolphins are killed off the coast of Japan every year and it is widely regarded in the small fishing towns as a great honour to be able to hunt dolphins and whales.  Despite enormous criticism from environmentalists and governments the slaughter continues and the meat from whales and dolphins fetch a high price on the local markets,  and is much more profitable and prized than either tuna or regular fish. 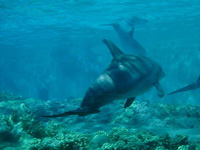 It's probably a bit radical to actually work,  but imagine if we could all boycott buying products from countries that are involved in overfishing and force them to take notice of the rest of the world and look at what they are doing.  Okay,  there might be a problem or two here because we all need memory chips in our computers and we buy many of cars, motorcycles, clothes, food and other goods from these countries each year.  A documentary shown on BBC Television 9th November 2004 highlights the current problems of dolphin hunting.

Take a look at this article as it may be of interest to some of you who actually care about dolphins and whales.

I agree with Critter who posted on 25-May-11 15:41, though our way of thinking might differ a bit.
Not only whales and dolphins that have feelings, every specy of animals have feelings.
Dogs, of course, have feelings. They are cute and nice to be with. But I never thought they are born to be a pet of human beings.

Eh hold on..... These animals are ki11ed for entertainment too?!?!? That beggars belief!

Darn this deserves more comments! It's a huge issue. IUt's not just the dolphins and whales but it's fishing methods on the whole. People are literally raping the sea and upsetting the balance by inconsidersate fishing methids, and over-fishing. I do apprectae that people need to earn a living, but if things don't change on a large scale the balance of the sea will be upset so badly that some creatures may never recover. This will have a greater inpact than most people realise. It's not just some creature far removed from us having abad time, it's the eco-system. The sea is critical to life on land, upsettting the balance too far may result in algae blooms, the release of noxious chemicals (yes really)....
I have every sympathy for dolphins, and I have had the pleasure and of being able to swim with some, but that is not really the whole point here. It's not just one or two species (even though that in itself should be more than enough to make people reconsider their actions),the way we treat the oceans really does have far reaching consequences
25/05/11 Critter
3

HA HA !! okay thanks!! Dolphins are actually really intelligent animals. They have feelings too! What would people feel like if they are treated to swim over here and dance. In Japan, there are these "Sea World" and those Japanese were watching the dolphins doing tricks and the other hand... eating dolphin meat!! That is just gross and wrong. It's not respective to those dolphins. Also, dolphin meat are highly poisonous. They contain Mercury, and its highly chemically poisonous. Dolphins and Whales are at the top of the food chain, causing them to be poisonous, like humans. I really wished people can make a difference and change what is happening that is wrong.
03/04/11 PeopleShouldMakeADifference!!
50

PSMAD I have not seen the film. However I believe that when a certain cruel race kills such a beautiful creature despite world opinion, they will be rewarded in kind. My belief is well founded according to what I read in the press.
03/04/11 Cynical Boblet
-102

Have you watched the documentary film "The Cove"? After watching it.... I felt really touched. It's a really good film, and I think if others watch it, they might help the world to change something. make a difference and help the dolphins and whales. Thank u 4 making this website. People should actually care for this crisis happening. I think people should really watch "The Cove" and learn something and make a difference. Thanks!! :D
02/04/11 PeopleShouldMakeADifference!!
88

what the world's governments should do is bring in inititives to stop the fishing of endangered species. planet earth doesn't just belong to us. we should have more respect for the natural world. it is so sad that people don't give this issue a second though just because they like chewing gum (which is made from whale blubber). hollow morals indeed.
06/11/10 mardi gras the candyman can
95

shoaib anfishi, could we have that again in English please?
13/09/10 grumpyoldwoman
86

For your information it is not fake, and this actually happens in the world, for no other reason than entertainment.

Why are you saying that I am a bad person for showing this to an animal loving community, to bring this to your attention.

Also on the real purpose of linking it, a lot of worse stuff happens in the world than dolphin hunting, the efforts of the animal lovers should be focused on this atrocity, not RELATIVELY harmless hunting. Hunting dolphin has a purpose, to acquire food, these cats are ki11ed for entertainment.
16/08/10 ZOMGZ!!!
-97

If you like animals then DON'T watch this. It is a fake video of kittens being used as live bait by game fishermen. It is fake but none the less the kittens are soaking wet, shivering and frightened.

The video is used to draw people in and then sell them stuff. Don't give them the satisfaction of another hit. I wish I hadn't but I thought it was genuinely something pleasant for animal lovers.

ZOMGZ!!! Last time I saw or smelt something like you I was scraping it off my shoe.

The moderators should remove the link unless they want to be known as purveyors of animal p. orn.
19/07/10 anon
-78

hey people! you neeeeeeed to listen! ok, japanieze people are doing this and they dont know. piut this into their minds:
they need to watch the cove.

man I wish japaniese people would stop cause that is just hartbreaking.plus dolphins are cute so I dont see why they would do that.
24/03/10 nannie neen
89

poor dolphins. imagine if 20,000 people died each year, just in japan, because dolphins ki11ed them. would that change their mind? think how many humans there are compared to one species of dolphin.
08/03/10 tryingtohelp
32