We’ve got quite a melting pot of different ethnic groups here in the United Kingdom.  However, our primary language as spoken by the vast majority of people is still English as far as I am aware.

I can fully appreciate that foreign visitors cannot be expected to speak the language, after all I can’t speak Spanish and I have visited Spanish owned islands on many an occasion.  I do try to make an effort and learn a few phrases though.  It takes time to learn English and as long the people who have moved to this country at least make the effort, I have no problem with that either.

Language used to cloak their conversation

However I take great offence when people use their native tongue to cloak their conversation in the presence of others who do not share their language.  It is just plain rude and quite unacceptable, particularly so when they were speaking English perfectly well just before you walked into the room. 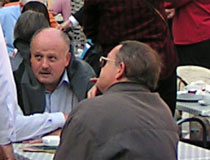 It happened to me only just now as I went to our company tearoom to make a round of drinks.  A couple of people were in there having a discussion, about what I don’t know and I am not interested anyway, when suddenly they started speaking in some eastern European dialect.

I’m not trying to be funny, or racist.  But if you want to have a private conversation, go somewhere private and have it.  Don’t use your language to exclude those around you, as it is extremely anti-social.

Send the Welsh home too. They are not wanted. Nor are the Gaelics. I can nae understand a single Glaswegian, and nor a Geordie. Speak my lingo or go home.
02/06/14 Go Home
-1

Immigrants to this country will talk about you and make insulting remarks in their own language when you are in their company. This is because they are ungrateful for all they have been given by Britain. They have tremendous sense of entitlement when there is really no need for it. As far as i know it is not the duty of the British government to find work for foreigners. It is for their own governments to look after their welfare and provide work. It's time the British government provided work for British people. We really don't need unskilled foreign workers here. They add nothing. Return them to their countries of origin and then they can speak any language they like.
02/05/14 Phil
0

Pakistanis do this very often. They are the ring-leaders of it. Point it out to them and they call you racist. However, since Britain is an "Islamic Terrorists" paradise, which protects Islam, and EVERY Arab on earth, then the English ask for all what they get. You can't spare pity where there is no sense, and in Britain, "sense" is very rare indeed.
25/03/14 One tonue, 65,987 voices
1

I'm English and my husband is Welsh and although I'm taking Welsh classes, it'll be a while before I'm fluent. His parents are lovely and chat away to each other in Welsh. If they visit me though, they talk to each other in English so that I'm not left out. They must be hard for a couple in their seventies, brough up in a mostly Welsh-speaking part of Wales so I appreciate this. Obviously, if they're in another room or talking just to my husband about household stuff, then they switch back to Welsh but I notice they say a couple of sentences in English first so I know roughly the topic. I think they are brilliant - very kind and welcoming.
27/11/13 Englishwoman in Wales
5

Alan G - I doubt very much you've set foot in a Welsh speaking area - it is you who exudes bad manners and absolute ignorance. As a "native", my language OF CHOICE is Cymraeg but if someone does'nt understand, I speak in their language as a matter of decent courtecy - something you cannot do - all you want to do is wipe the Welsh language off the face of this earth - scary.
02/04/13 tarian
3

There are always people who like taking advatnage of vulnerability of others - and there are just as many amongst the foreign groups in Britain as amongst the British people who realise that someone is struggling with English. I personally never do that, I have never spoken about a person in their presence while knowing that they wouldn't understand the language I'm speaking in. It would not only be disrespectful towards the person, but also towards myself - I do not take advantage of the vulnerable, whatever their vulnerability is, period.

Yet, there is another side of the story. There was a time when I worked in a very ethnically mixed environment, and it wasn't uncommon that people would speak in a language I didn't understand. I never felt threatened by it. I just didn't think that I was so important and they had nothing better to talk about but me. If English is your first language then one day allow yourself to listen to what English speakers talk about in a public place - whether it's on a train or at the post office - and think that a vast majority of the other language speakers talk about the same stuff, and 99.9% of the stuff they talk about concerns THEM, not YOU. Most people pay very little attention to some random passers by, seriously. Just relax a bit :)
16/09/12 anja
6

What is so wrong about spesking me own langage? I dont have to speek English just because innit.

Oh god! We are so like the French about language. Should holiday travellers coming to the UK not speak their own mother tongue for fear of offending a Brit?
25/12/10 Daisy
-28

This kind of language exclusion/rudeness does happen and there's no need to deny it. It's behind closed doors language brought out into the open, but it's near impossible to prove. You could brandish a recording device when it happens ("Oh I keep forgetting to switch this recorder off."), and mention that your sister's colleague is "insert nationality here". That might calm things a lot. Another good thing to do is to actually learn a bit of the language and use it with them. That dampens the enthusiasm considerably because it's not possible to know what people will and won't pick up once they start learning a language. And who knows, it might make you some new friends.
24/10/10 anon
-5

I have to admit to being a bit surprised that that comment made it through the automated censorship. Everybody is so sensitive about anything that may sound slightly racist nowadays.
24/10/10 old but still grumpy
-8