You can't open a newspaper or turn on the TV these days without fnding a story about some investment bank or other that has gone to the wall.  Companies left, right and centre are announcing job cuts and the phrase "credit crunch" seems to be on everyones lips.

I didn't really have much of an opinion on the whole global financial crisis. Understandably my business was affected financially but I'm still making enough of a living to survive and that's all that really mattered to me.  Some aspects of the situation have temporarily benefited me, and I'm sure those same conditions have put some people out of pocket.  I know a few people who are very worried about the situation and others who have definitely lost money.  Still, we soldier on and make the best of what we've got.  We hope (maybe pray) that those in command of our country make the right decisions and steer us on the path to recovery.  Can we do anything else?

What about the people who work for the big investment banks in the city of London though?  They're on the cutting edge of all this and working in what must be a high stress environment.  Each day they come into work and find they still have a job is a bonus.  You've got to have some sympathy for them haven't you? 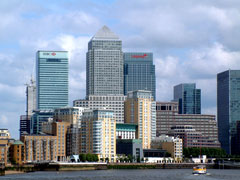 I've been in line for redundancy a few times myself so I know exactly what it's like.  I was actually made redundant in the middle of the last recession in the early nineties.  I wasn't overly concerned at the time; being young, having no responsibilities and some marketable skills meant finding another job was relatively easy.  No doubt some of the men and women working in the city may find securing employment a bit trickier this time round.  I may have had some sympathy for these people yesterday but not today.

I read an article in which the city bankers gave an insight as to what it was like working there at the moment and how 'tough' they were finding things.  When I read the bit (written by a city employee of over a decade) that said "People are buying lunch for £5 in the cafeteria rather then spending &pound20 on some Sushi or Dim Sum outside"... well I'm afraid any compassion I might have felt for these guys dried up right there and then!

In the first instance, who goes out at lunchtime and blows £20 on a whim?  I'm sorry, but someone who used could be so extravagant on a daily basis before the financial crisis will get only my contempt.  Even £5 spent spent in the cafeteria could be considered unncessary as I could quite easily (and often do) make this last a whole week!

A monthly team lunch at a nice restaurant is one thing, but pointless daily extravegance for the sake of it is another matter.  I wonder if such carelessness with money is perhaps the root cause all these problems and perhaps amore meagre salary would teach these people the value of money.  As the saying goes "you reap what you sow" - so maybe you lot are all getting what you deserve!

"Darling, check our credit score to see if we can get more on the knock and get ourselves into deeper debt".

I love watching that TV ad. Just goes to show how the system can manipulate stupid greedy people to ruin their lives. Sheep, and being sheered comes to mind!!!!!!!
24/08/19 Jethro
7

£20 Sushi or Dim-sum? Nah nah nah. That's still not good enough for the investment bankers. I've seen some bankers in the city popping into an oyster bar at LUNCHTIME. They also have to head off to the Carribeans for a holiday or sip shampagne on a yacht in the Mediterranean. Some top dog bankers have already bought small islands in the Pacific Ocean.
16/07/13 Mick
7

The British Government have announced a new 2.5 billion bank levy!!!! What do the paragons of virtue (the bankers) who tipped the whole world into recession say???? The costs of this levy WILL be passed onto customers
23/10/10 wildernessvoice
7

Why I am an Atheist

The chief executive of Goldman Sachs, which has attracted widespread media attention over the size of its staff bonuses, believes banks serve a social purpose and are doing "God's work."
27/03/10 Why I am an Atheist
2

Young Chuck moved to Texas and bought a donkey from a farmer for
$100. The farmer agreed to deliver the donkey the next day. The next day
the farmer drove up and said, "Sorry Chuck, but I have some bad news.
The donkey died.'"
Chuck replied, "Well then, just give me my money back." The farmer
said,"Can't do that. I went and spent it already." Chuck said, "OK,
then, just bring me the dead donkey." The farmer asked, "What ya gonna
do with a dead donkey?" Chuck said, "I'm going to raffle him off." The
farmer said, "You can't raffle off a dead donkey!" Chuck said, "Sure I
can. Watch me. I just won't tell anybody he's dead."
A month later, the farmer met up with Chuck and asked, "What happened
with that dead donkey?
"Chuck said, "I raffled him off. I sold 500 tickets at two dollars
apiece and made a profit of $998.00." The farmer said, "Didn't anyone
complain?"
Chuck said, "Just the guy who won. So I gave him his two dollars back."

Today it has been announced that over one thousand city bankers earn over one million a year,

Now we all know why the government has to keep bailing out the banks.
26/11/09 Gainsborough lad.
-8

" You stupid, stupid people. 70% of our business with the rest of the world, a very significant proportion of our Gross National Product is with Euroland.
*I hate Idiots 26-Sep-2009 12:24"

I also don't have any time for idiots, but you need to do a little thinking before you accuse others.
70% of the UK's business may be with the rest of the world - if you say so -I haven't checked the figure the figure sounds plausible.

It's not all imports, there a lot of exports too, many of which are what is known as invisible exports, and these become less expensive and thus more competitive as sterling devalues, so there is a benefit in the form of a trade-off. Naturally there is a so-called 'happy medium' and the UK economy is probably not at that point, but controlled comparative weakness of a currency, specially if you are a nett exporter, is not a bad thing.
26/09/09 MikeP
-9

You stupid, stupid people. Most foods are imported: most industrially made goods are imported. Most people take their holidays in Europe. A very large group of people have retired to Greece, Spain, France and Portugal. 70% of our business with the rest of the world, a very significant proportion of our Gross National Product is with Euroland. We should have joined the Euro a decade ago. Instead we have allowed an incompetent Government and an incompetently managed financial system to pauperise every citizen in this country.

Just watch the standard of living in this country fall significantly over the next few years as the Government has to tax us all for its failings.

The problem is in this country. Just watch prices rise and rise over the next few years. The only thing that will fall is house-prices. Oh, and incompetent governments too.
26/09/09 I hate Idiots
-1

You beat me to it, MikeP! It's only a problem if you go to a country using the euro. No more cheap beer on your hols!
Hopefully this may eventually right itself somewhat when countries in the eurozone realise that they are losing squillions of holidaymakers to non-euro countries like Turkey and Tunisia.
26/09/09 grumpyoldwoman
5

"Still further the Pound falls against the Euro. That means everyone in the country is now earning 30% less than they did last year."

Everyone in the country is now earning 30% less than they did last year ..... against the Euro. This is only fully relevant if you are purchasing in, or spending, Euros, or other currencies against which sterling has fallen. It's doing quite well against the (now defunct) Zimbabwe Dollar, for example.

If you only live in, and spend, Sterling, then the impact it has on you is that some imports are more expensive but this will ultimately be offset against healthier exports, which become cheaper, resulting in a stronger economy. That's the theory. In practice of course with the bunch of clowns and thieves who are running the UK economy it won't work that way, but I just felt it appropriate to restore a little balance to the argument.
26/09/09 MikeP
-4

Still further the Pound falls against the Euro. That means everyone in the country is now earning 30% less than they did last year.

Did I and my fellow workers get a pay rise this year? Or even last year? No. So I reckon I am down 40% in value on my salary. I am just as productive as I ever was. I work in the international arena. I should be raking it in. No b'tards like the banker have stolen my income.

And this year I got a bonus = £360 after a long ahrd year's work whether I made every effort. That's 18 bankers' lunches, without booze.

I have been robbed everywhichway. My house has lost over £100,000 in value in the past 18 months.

I will not be able to afford to retire in Spain as I hoped. Instead I have to live in country which has been ripped off by its bankers.
26/09/09 A Mightily Disappointed Citize
8

Hello merchant banker, you old willy wonkahh. Made any chocolate today? Did you make the nation a profit? Have we any bonuses left to pick with you? I couldn't give a toss about your remuneration, but you have collectively destroyed mine. May you rot in Hell for all eternity in a celibate existence. Mammon is your brother. If you love the false god of riches and avarice, and unjust worldly gain, this daemon will torment you forever.
24/09/09 Visitation from Hell
13

A banker will experience many trips and falls

Now you might find his house name rather funny

The house he can afford with all his money

Do Not Forsake Me Oh My Darlin

BAE Systems plans 1,116 job cuts. The Government is going to cut public spending. Fred the Shed is still raking it in despite the complete economic mess his kind left the country in.

Pound is once again down on the Euro. The value of our wages and salaries are heading for disaster.

It's high time we prosecuted Fred the Shroud from the Turin Bankers of Lombard Street!
15/09/09 Do Not Forsake Me Oh My Darlin
-11

More from the BBC today -

"Prime Minister Gordon Brown says he is "appalled" that some financial firms are continuing - or even extending - their bonus culture. In a BBC interview to mark a year since the collapse of Lehman Brothers, he said global action was needed to sort out "unfinished business" at banks.

Cleaning up the sector, including global regulation was needed, he added. "

London bosses out of touch with the business