Bank interest rate cut benefits us how exactly?  What is the point of the bank of england cutting the base rate if the mortgage lenders aren't going to pass the benefit on to the public by reducing mortgage rates?  At the same time banks immediately slash the interest rates on saving accounts which mean people earn less on any savings they may have. The benefits of a cut in interest rates aren't reaching the very people it's supposed to help.

We're paying the old rate on our mortgages and our savings in the bank are worth less...

Isn't the point in dropping the interest rate to try and reduce the effects of this recession? How do they expect that to happen when we're still paying the old rate on our mortgages and our savings in the bank are worth less?  The quarter percent that HBOS offered to pass on to customers was pretty pathetic.  It's an absolutely ludicrous state of affairs and I think that the mortgage companies and lenders should be forced to adjust their rates accordingly whenever a change in the base rate occurs.  No wonder the country is almost on its knees! 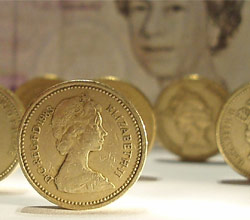 We saw the same thing happen recently with the price of oil when it was fluctuating.  The price per barrel went up and almost immediately the price at the pumps went up.  The oil prices went down and there was a significant delay in the prices paid on the forcourt following suit.  It's enough to make a person weep.  We're quite literally being screwed left, right and centre by big business.  It has got to stop now!

So, the bank of England has cut interest rates by one percentage point and it's at the lowest level since 1951.  Well big deal, because we certainly aren't likely to reap the benefits of this for a while yet.  Gordon Brown can urge lenders to pass on the rate cut until he's blue in the face; no one's listening and our economy will continue to plunge until the banks, the building societies and large corporations quit fleecing home owners.

BoE keeps interest rates at historic low, but sooner or later they will start to rise. And I predict it will happen very soon because us oldies have lost loads on our investments and are not best pleased. But there is a general election coming soon and the Tories know our grey vote will be crucial to them regaining power. They will try to appease us with a rate rise, and that will mean Mortgages will go up. The Government that is elected in 2015 knows the grey vote is a winner and will do anything to get our support.
10/04/14 OAP
0

Low rates are great for existing mortgage payers. Why? Well you pay less interest and therefore have more money to spend on the economy whilst clearing your own debt burden.

I’ve been over paying my mortgage for 5 years now and instead of 25 years will pay my house of in 12 if it continues.

If interest rates go up on morgages soon there'll be three million families in serious problems trying to manage the debt they've run up. It would be a good idea if people were limited to a certain amount of credit, excluding morgages. This would stop the want,want,want culture that seems to be around these days.
19/12/13 Nico
5

Bank of England interest rate has been to low for a long time. We older investers have not made interest on our capitol for years. Its long overdue and should be put up ASP.
19/12/13 OAP
5

On one hand Mark Carney, Governer of the BOE tells us that the 0.5% interest rates are here until the jobless figures drop below 7% and that won't happen untill late 2015. Yesteday government figures bragged unemployment had fallen to 7.6%, the biggest drop in three years. In the Tories pre-election attempt to kid us all that Britain is on the rapid mend, and that they are doing a spiffing job, they have failed to point out that the BOE will be forced to raise interest rate much sooner. Watch how quickly all your mortgages start to rocket. Think long and hard where your cross goes on that ballot paper and ask yourself," can I trust what the Politicians are saying".
19/12/13 Jethro
7

Some of the thoughts about China is interesting. I think you've got a point though. China wants to invest in the EU because there is not a square inch of land or a cubic inch of air that is not polluted in China now. They're probably thinking of buying Greece and Portugal to use as a dump. The rich and powerful people also want to come out of China due to the pollution and the political uncertainties. Some of them are willing to pay as much as Â£1m for an EU passport.
12/07/13 Mark
-3

Have just thought of a solution to the Greek part of the current economic crisis.

China appears to be willing to put some money into the EU (presumably they must think there is a profit to be made); so, China bails out Greece and in return the EU puts the Chinese government in charge of Greece.

I think the Greeks would very quickly learn a new work ethic!
02/11/11 grumpyoldwoman
-6

The Bank Interest Rate cut is robbing savers and pensioners: annuity rates are down. All the western economies are bankrupt: USA, Italy, Spain, UK, Greece, Ireland, Portugal, totally bankrupt. They have no choice but to cut spending and rob their pensioners, and future unborn generations. We are heading rapidly to becoming economic slaves of the Chinese. Genghis Khan couldn't have done more. Perhaps a new Gandhi needs to arise form our lands, and forbid payment to Peking of the Salt Tax. Maybe we need to wear homespun clothes, and loincloths.
06/08/11 The Economics of Turdistan
-12

Why is it that my banks standard rate (excluding any new customer only offers) only give me 0.25 % interest on my savings think I was getting .08p a month on a deposit of 500 quid and yet their loans cost 7.5% that's a massive difference no wonder they can get bonus of 2 million and no one can save up a deposit to buy a house . Then there's cheeky MPs who fiddle there expenses are getting upset about overtime paid to consultants in the NHS who save people lives spent years studying and continue to learn all there career unlike MPs who are no more ski11ed than a double glazing salesman . Seems like the better you are at talking and the less ski11ed you are the bigger pay you get .
18/01/11 Toasty
-12

UK banks are charging higher spread over libor then any other countries in Europe. The UK comsumer are financing the bonus for very banker who got us here. The spread between GBP libor and the lending rate should be 100bps to 150bps at most but we are getting charged at 250bps to 300bps above the interbanking rate. it is not the banks are not lending but they are charging us like we all are sub-prime lenders.
02/12/09 John ex-trader.
-7

Well that one was obviously not me either! I am waiting to hear from the site administrators.
12/08/09 grumpyoldwoman
3

God is currently in charge of the economy. If you are a non-believer, God won't help you. What does the dollar note say? In God We Trust! Put not thy trust in thy fellow man. Render unto Caesar that which is Caesar's. As the one who has committed incest said: "Love thy brother".

I"ve just eaten a Budgens sheperds pie for my supper, Right nice it was, much better than sainsburys ready meals.
12/08/09 grumpyoldwoman
-16