Let me tell people about my SKY gripe.  A few weeks ago my next door neighbour got SKY+ installed - no he didn't tell me he was getting it or I could have drank £50 worth of M&S booze to recover.

Anyhow, the engineer installs the dish slap bang in the middle of our semi-detached houses.  Both houses are identical and my dish was hidden on east facing wall.  When I attempted to access my own SKY channels that evening I was met with the familiar 'No signal is being received' message.  When I went outside I could see what the problem was as my dish was pointing directly at my neighbour's satellite dish.

I telephoned the customer service centre and spent a good 20 minutes with the girl going through numerous security questions and getting me to reset the box as I had done myself previously before phoning.  I pointed out on several occasions that my dish was working perfectly until someone slapped another dish in front of it, however initially she insisted this could not be the problem.  Eventually she said I would need to pay the call out fee of £60 for an engineer. When I politely told her what to do with this suggestion she came up with this cracker...

I was to go round to my neighbour and explain the situation, telling them I could not afford to pay the call out fee so they would have to help me pay it!!  I asked her if she was recording the telephone call as promised 30 minutes previously, and if so, could she please send me a copy to keep me amused when necessary.  I got passed on to her so called superior who could not see what my problem was.  I just couldn't understand why this problem was so difficult to understand! 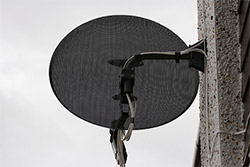 Anyway, when I threatened to cancel my sky subscription they soon agreed to a free call out.  The engineer came two days later and asked 'Who the **** had put up that dish?'  He told my wife it was one of the worst installation jobs he had seen.  Did he report it? No of course not. So did he rectify the problem? No he bleeding well didn't!  Instead of moving their Sky dish he elected to put my previously 'hidden' Sky dish on a large pole so that it now sticks out the top of the house.  What a perfect solution to the problem - why didn't I think of that!!!!

Good old SKY... flaming useless, but second only to TALK TALK! Yes, we went there as well and they're at the top of the 'poor service' league.

My sky dish was installed but not properly secured to the wall and it's now swinging back and forth in the wind like a piece of **. I mean seriously these so called 'engineers' are dickheads! How the hell did they qualify to do their job in the first place?
10/07/13 Nick
-8

This exact same thing has happened to me. New dish put right in front of my existing one last Wednesday. Lost signal to half my channels since. Sky wont send and engineer out till next Sunday to fix. Idiots.
27/02/12 Livi
2

Wow someone else finding out SKY are not interested in anything other than profit. When will people learn?

A quit moaning you bloody baby. They fixed the bloody problem. What are you complaining about?
28/04/10 Chav_beater
-14

Can anyone explain to me why I lose reception on Sky whilst watching BBC 1 & 2 and a lesser degree ITV 1 when all other channels seem to be unaffected?
15/09/09 Di
-12

Why do theese companies still operate!
Why are they not closed down by Companies House.
25/07/09 Swindon
-15

When I had my Sky installed it stopped working with a black screen and a Sky error message. The Sky call centre insisted it was a problem with my new HD tv. They are fools.
15/04/09 tomocb
-4

Tell your Neighbour to get rid of Sky TV.

They charge you £49 for a box and some vouchers to spend in Marks and Spencers and you all think it is wonderful.

Not good when your all being ripped off by the UK Government!

£800 per year to drink water
£1400 per year to your Councils
Subsidising Mr. Fred Goodwins Pension and contributing funds to MPs to do their homes up.
Paying out £888 per month in HP Charges to drive a 4x4 that does 12 miles to a gallon and paying out £2088 in fuel costs over a distance of 20 miles per day for a year.

You need to look at all of this as this is why your all in debt.

Welcome to Rip off Britain where the Government walk all over you.

Ash says: "Leave the customer services lassy alone. Its a bloody hard job when eejits like you phone constantly. If you don't like skys service then cancel. I don't think we will miss you too much. We have around 10million other idiots like you to annoy us!"

Well, now. Ash is not a very common name, is it? I'm sure there aren't many people called Ash working for Sky. Shouldn't be too hard for them to identify you. Next time you publically discredit your employer, you may want to consider using an alias.
16/02/09 Unimpressed Sky Customer
1

When I got SKY+HD installed, the engineer duly checked that all the HD channels were working, but drove off in his van without bothering to ensure the rest of my channels still worked. More than half of the normal channels, includding BBC1, had suddenly either lost their signal completely, or become ruined by interference. To their credit, they sent an engineer back 2 days later without charging a fee, but I had to take a morning off work so I could be there. It just beggars beleif that a Sky TV installation can occurr without the engineer checking that the tv channels actaully work!
16/02/09 Disillusioned Sky HD User
-10

Leave the customer services lassy alone. Its a bloody hard job when eejits like you phone constantly. If you don't like skys service then cancel. I don't think we will miss you too much. We have around 10million other idiots like you to annoy us!
02/02/09 ash
-4