I had basic sky installed about 4 years ago but cancelled at the end of the year as there was nothing I wanted to watch which I couldn't see on freeview.  I kept the satellite, wiring and digibox.

Last December I decided to buy my family HD TV and a friend recommended the Sky HD+, particularly for the functionality of the time slip hard drive.  I paid £129 for the installation of the new service and agreed to a monthly fee of £36, of which £9.95 was the monthly fee for HD+.  I regarded this as an absurd amount of money but wanted to give my family a nice treat.

The engineer who came simply connected the HD+ box to the existing sky connection and left.  We recently extended our house and went to the expense of putting in a conduit through which to run cables.  The satellite dish is on wall of a ground floor courtyard.  All you need is rod, like a fishing rod to push the cable through.

Our Sky HD+ has never worked properly and I haven't been able to record anything in the 5 months I have owned the system!  The few programmes shown in HD are good quality, but certainly not worth paying £120 per year for. 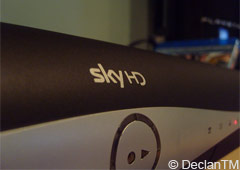 The sky signal for the basic service is also very unreliable and goes down at least 3 times a month - usually when I want to watch a horse race or other time sensitive event.  At present Sky is less reliable than "freeview".

If you need to watch a film you can either rent or download from the Internet.  The customer service is non existent.  The "support" phone number shown on the screen had been incorrect for 6 months.  The automated menu system is excruciating and the good people of Bangalore, India find it hard to communicate with us (not their fault).  You then get Livingstone, where some people can be very helpful, but are powerless to actually solve the problem.

After 6 months I have had enough

At the beginning I was promised 2 visits from engineers to fix the problem, neither of whom showed up so basically a huge waste of time with people sitting in waiting for them.  After 6 months I have had enough of their dishonesty and incompetence.  I have sent them a default notice giving 10 days to supply what they are contracted to, otherwise I will take legal action to recover the money I have spent and to sue them for breach of contract.

I have offered to employ a competent engineer with the required tool to push the wiring through the conduit, but they continue to offer only a call from their less than competent installers, who are not equipped with the basic tools that every TV and aerial installer should have.

Apparently it takes sky a month to process letters by which time the summons will have been issued and the case will have been put before the county court.  I will claim a refund of all the money paid, my legal fees and all my expenses including my time spent on the phone to their dreadful "customer service".  At the very least they are going to have to take some notice.

No one should have to put up with such terrible service and breach of contract.  If their company ethics are that they simply don't care for their customers and their own moral standards, then the only way is to take them to court using the small claims procedure.  Anyone can do it, so good luck!

I've got SKY+ HD I never watch BBC, ITV etc., cant stand them to be honest. However, with SKY the Syfy channel doesn't really show anything of the si-fi nature, The horror channel shows Star Trek 'The Original Series' which I like, but why on horror and not Syfy? Richplnet which I love which used to be on 200 was taken off air... and on top of that (and other things besides) when its raining hard outside, the signal goes!!!
01/02/14 Des
-2

does 'HD+' mean clearer, more defined pictures? we recently had a HD+ box installed, and now we can't read anything on the screen; the pictures have become so darkened, and words so blurred that we virtually have to move up to the screen with a torchlight to be able to identify the words. we expected the HD+ box to give us a clearer, brighter viewing - not dimmer, undefined words and pictures. we've decided to bring back the old regular box.
16/03/11 angela
-28

Been with sky for around 20 years and was happy with the service we had, my husband then up graded to HD and muilt room, big mistake we have been told that bescause we dont have the phone line in on the second box they want to charge us 41.00 extra a month we are aready paying 71.00 a month so we have said they can take the box out, we all so said to take the HD box and the dish, and any thing else thats to do with Sky but they wont so we have to wait until are contract runs out in 6 months time,right fed up with Sky and think they are just conning money out of people left right and centre and they know that we cant do a thing a bout it.
19/01/11 jan
-15

Since we changedto Sky H.H. it has neverworked for more than a few hours.
You spend hours on the phone pressing this and that to no acail. we have had nothing at all for five weeks and paying for nothing.
They will do anything but fix it. It a big money making scam.
25/11/10 acacia
-4

Could you please tell me whether you had taken legal action and the process you followed. I can be contacted at ravi_roark@yahoo.com.

well daz sky's normal box only uses one cable from the dish to recieve the signal, a sky+ or sky+HD box uses two cables from the dish, so basically you would need to have your reciever on the dish replaced with one that accepts two cables and also have a second cable running through into your house, the reason for this is that one cable uses the signal for viewing now and the other cable uses the signal for recording or pausing live tv, also your sky subscription card will not work in any new box until a sky customer service rep has sent out a signal to enable your viewing card to be used with a new box, hope this answer helps
13/10/10 ian (manchester)
-15

we had basic sky installed for the past 4 yrs and had no problems, we then decided to branch out and get sky+HD, what a big mistake, 30 minutes after instalation it all went down so they sent out another engineer two days later to fix it, the same engineer came fiddled around a bit then left, two days later no signal yet again, same engineer visit again haha, new box (well was supposed to be brand new box but later discovered we had been given reconditioned boxes from the start, after 6 months of viewing being on and off and hardly ever being able to record anythin we got a third box installed, 45 minutes after instalation the signal went again so I thought enough is enough I got hold of the box to unplug it and got an electrical shock from the box casing itself, now thats were I had them haha, we got all our money refunded for 6 months of HD, instalation costs refunded and a compensation payment of 80 pounds, we have since put in our old sky box and are back on the basic package with no problems at all, (and yes we have to choose sky because virgin media have not run any cables down our street and dont intend to in any near future) dont waste your money on sky+HD its a waste of time and a total rip off
13/10/10 ian (manchester)
4

Baffles me why Mugs fall for sky??? Big dish, Free-Sat Box and row of Lnb's Give me 8000 channels to boggle my Brain, takes all nite just channel hopping then when you decide to watch that program you skipped, you cant remember the damb channel number and end up watching Sexysat channel,,,,, Yikes theres some dirty big holes on there tonight!!!!
18/09/10 Shmuck
-6

I ordered a movie from Sky advertised as HD. I though Tim Burton's 'Alice in Wonderland' film would provide a good demo f the SKY HD service, on the HD TV and 5:1 Dolby Digital. The film quality was poor, definately not HD. I've seen HD programs such as Coast broadcast in HD (and the free sky and BBC trailers) and heared in 5:1 stereo. On ringing customer service on the poor quailty of the film they told me that 5:1 stereo was not their problem, it was to do with my sound system! And then the engineer told me that he had trouble telling the difference betwen HD and normal broadcasts, perobably was HD! No help and utterly a waste of time. Virgin customer support is no different but I think the quality of the broadcast is marginally better. Time to re-visit Virgin methinks!
03/09/10 Terry
-10

Having been a Sky customer for 20 years, I was appalled that we would have to pay £60 for an "engineer" to run a cable from the LNB to the SKY HD+ box and be charged £60. Sky show no loyalty to their long standing customers whatsoever.
20/08/10 DisGruntled
-8

We're about to leave them for Virgin Media, had the HD + box for two and half years and like the vast majority of them it's now slowly dying. No problem with Sky tprogrammes as such (we're dropping Sky Sports as we hardly watch it) but we can't record anything anymore it can take about 5 minutes to change channels, the planner freezes etc. Contacted customer services twice, saying we're unhappy its only lasted for the time it has, and their offer is pay £65 for a engineer if he can't fix it he will give you a refurbed box with 90 days guarantee. Then what? it happens again?. I know from other forums that when we do actually ring to cancel in the next day or so there's a good chance they will offer us a brand new box, but life's too short to keep having to take it to that level to get what you want. Bye Bye Sky!
22/07/10 Nick
-3

My gripe comes from a customer I spent a fortune buying sky HD 3D to use in my pub every person who tried the glasses on thought it was fantastic and can,t wait for the season to start but alass I have a friend who said I always buy the most up to date equipment for home but he put on the glasses then turn round LOOKED AT THE TV AND THEN IN A LOUD VOICE SAID OH MY GOD it does"nt do nowt for me. Oh boy was he deflated, it turns out he has a dodgey left eye and the two colours wont mix to give him 3D affect and wants to know if there is any way for him to watch 3D TV there must be more people out there who have the same problem. HELP PLEASE IM GETTING EARACHE!
14/07/10 Prince Albert the 1st
-11