I understand that Britain is getting more and more crowded and there are times when it's difficult just to walk down the street.  My gripe though is about people who use buses, trains or escalators and don't seem to realise that there may be somebody behind them.

Too often, the bus stops and there is a queue to get off and people wait patiently for their turn.  However, the other day, a man got off and just stood there and started rummaging for something in his jacket.  As the bus was right against the kerb and other people were trying to get on, we were stuck.  No way to get past him.  After a couple of minutes and "Excuse me, please", eventually he moved on.

A couple of people then got off and one lady walked to the right, changed her mind and walked to the left, right in front of somebody just stepping down from the bus.  There was a bit of a collision, obviously and shopping bags everywhere.  She blamed the person getting off the bus but actually it wasn't their fault - she shouldn't have doubled back on herself without looking. 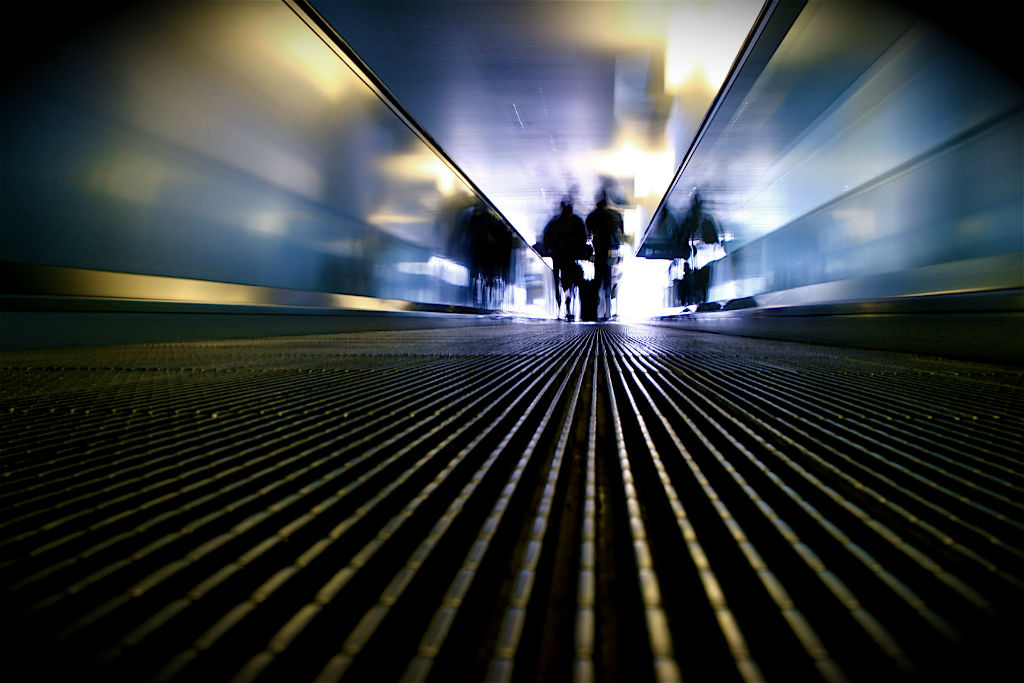 This also happens in airports on the travelators.  People are having a bit of a chat or looking out the window at the planes landing and are suddenly surprised when the moving walkway ends and they need to get off.  Fast.  Then, it's every man for himself as they try to grab all their cases and bags and end up effectively blocking the walkway.  This is really dangerous for other passengers who are behind them as there is nowhere to go but the walkway keeps moving.  I've seen a couple of Asian students actually leap over the side as there was a pileup at the end of the walkway.  Welcome to Britain!  How are your hurdling skills?

escalators - people walk off at the bottom and then just stop!

The worst thing is escalators - people walk off at the bottom and then just stop!!!  They seem to totally forget that other people are following them.  I've had this a few times in department stores.  I've literally had to push people out of my way rather than crash into them from behind.

Now, I'm not suggesting that we all get fitted with a pair of wing mirrors on our heads but a bit of spatial awareness wouldn't go amiss.  Yes - there are people behind you.  Move along!

By: Not so happy shopper

Shove the people pushing you from behind on an up-escalator right on back down the stairs again. Tell them off. Tell them to go to Hell. These people are rude and unmannered yobs, unlearned in the behaviour in a crowd.
16/07/13 The Yobs Suck
-2

The Post office is worst. People go in get their pensions and change their giro, and just stop to sort their dosh out just outside the door.
24/06/13 Craig D
6

It's the horrible people in front of me with huge backpacks swinging around striking me and others which get my goat. Push them over!
23/06/13 I hate backpackers
-1

Britain has got too many people. Blame your Home Office for letting immigrants in and also dole scrounging single mums for popping out sprogs.
21/06/13 Mark
-9

This all comes down to people having no consideration or respect for others around them - all they are concerned with is their own little world.People in this town regularly block doorways having a chat, or take up the whole pavement whilst talking with their friends forcing people to step into the road. They see you coming and ignore you.
I have given up being polite, and barge through them. They WILL learn whether they like it or not....
18/06/13 Vigilante
7

Stopping to 'consider your next move' at the top or bottom of escalators is most annoying, indeed it is potentially dangerous as the people are arriving behind you at a fixed rate! I sometimes wonder if it is an affectation, the attitude being that these muppets wish people to know they 'consider' every move.
18/06/13 Tiimelord
0

I live in a town that has a twice weekly market and the one thats on saturdays ib the high street is my bugbear though ive been in all the griper's comments positions before now.
There are too many people trudging through and while I amy want to stop and buy something at a stall I will quite happily move closer allowing the passage behind me to move along uncongested but there are others who will not realise that they're blocking the way and actually give you a dirty look if you say excuse me as politely as possible. I sometimes think about giving them a shove and saying "out of the way you fat c**t!" so they get the message. How i haven't yet is nothing short of a miracle.
18/06/13 ahforfoulkessake
6

I agree with the post and comments, also more than once I have had people stepping back without checking behind them, resulting in a very sore foot!
18/06/13 Craig D
12

I find women with buggies to be among the worst offenders regarding lack of spatial awareness or concern for other people.
18/06/13 Fed up Pedestrian
3

Groups of three or four abreast on the pavement who suddenly stop are a nightmare also, as are conversation groups spread across blocking the whole pavement.
18/06/13 Charmbrights
13

People that won't move over on a narrow pavement

People standing in the way at a shopping centre