I use public transport to get to work during the week, and as a regular commuter I like to think of myself as a considerate and conscientious passenger, and as such I will not think twice about offering my seat to someone less able bodied or a pregnant woman. Also whenever passengers are leaving the train, I will allow them to exit first and will support mothers with buggies on the stairs or those with heavy luggage.

Some may call me old fashioned but if I am standing waiting for a seat and a woman is too, I will let them take the seat ahead of me. Perhaps I am in a minority of people who do this, but I don't think that it is a particularly bad habit and if more people did the same the world would be a more civilised place. This week, however, an incident occurred which made me think, am I just being a mug offering my seat to a woman before me? 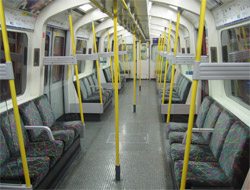 On a journey I was on recently the train was very busy and I was standing throughout a good few stops. A woman came on board and eventually a seat became available. I gestured to the woman to let her know that she could take the seat; she then sat down and just glanced up at me without so much as a thank you. Afterwards I thought did I do the right thing by offering my seat or is it every man/person for themselves in this society? Should I just accept that with equality offering my seat is plain condescending and I should not expect a word of thanks?

Interestingly I told a group of young male offenders who attend a workshop that I run this story. Nearly all of them said that they would not have bothered giving up a seat and some would have (in other words) given this woman a piece of their mind if asked to move - this is something I would never do.

What do people think?

It was nice of you to giver up your seat, but I don't believe you should feel obligated to do so, these days it is every man for themselves. I try to compromise, last time I was traveling on a jam packed train I gave up my seat for an old lady on the condition she put her feet on one of my heavy suitcases. It was a fair deal.
24/03/14 pet
1

I guess I've come to the right place for education as both you and Nick know a lot about buses, what they are and who uses them.

It’s always useful to have knowledgeable individuals who have themselves a breath of experience and practical use of such devices.

One further question, which are you, the unemployed, old or just mentally feeble?

I’ve guessed that Nick is the low life dole scumbag as drunkenness didn’t come through in his writing.

I would be useful to know so in the future my questions can be directed to the right people.

@CarMan, A''bus'' is short for ''Omnibus'' which is also called (as Nick correctly states) a ''loser-cruiser'', and a ''Scum-shovel''. These modes of transport are used by the unemployed, the olds and the mentally feeble. Hope this helps.
21/03/14 collar
0

Looks like Nick does most of his travelling around by bus!
21/03/14 Samson (Delilah's too busy to post)
0

Let me tell you CarMan a 'bus' is a 'loser cruiser' which carries all sorts of low life doley scumbags, drunks and old crooks around town.
21/03/14 Nick
0

Depends how you define "elderly". I'm in my early 60s but perfectly fit and usually on my way to or from my full-time employment. So I don't need a seat any more than most other passengers, and wouldn't want one to be offered (although I'd say thanks if it happened). It's nice of younger people to be polite but I hate that looking over the queue to see who's the oldest.
20/03/14 Caz
0

Well, we had 3 buggies on the bus today. The aisle was completely blocked and elderly people were struggling to get on with walking sticks and then having to stand because they couldn't get to a seat. What was the driver thinking? It should be 2 maximum, I believe.

I'm a student so travel during the day but couldn't help noticing the all 3 of the mothers had their partners with them. All the these young guys in their 20s using public transport during the day. I expect they get a lot more on the dole than in a job.
09/08/13 Just sayin'
-4

I don't mind offering a seat to say an older person with walking stick, someone with many carrier bags of shopping, a pregnant lady, someone on crutches, has a pushchair or young kids with them without hesitation but I won't have it expected of me by someone who's capable of standing for 10mins while the bus goes to their stop especially if im on my way home from work and Im tired from being on my feet all day and they haven't done a stroke of work in their life.
and Nick, you're wrong, I do work but cannot afford to buy or run a car with all the costs involved.
31/05/13 ahforfoulkessake
-5

"most people on a bus are scumbags on the dole - decent people all drive their own cars." Nick

Stateside, buses are called "Looser Cruisers" because just about anyone can afford to own and run a car.

I would hestate to use that term in the UK though, with the price of cars, road tax, insurance etc putting a car beyond the reach of many people.

Some of the "clientle" on public transport do whiff a bit and I would gladly give up my seat and let someone else absorb the aroma.
24/05/13 Stalag14
-9

I wouldn't give up my seat on a bus to anyone because nowadays most people on a bus are scumbags on the dole - decent people all drive their own cars.
24/05/13 Nick
-19