My gripe is about Oxford City Council who have a crazy scheme to introduce residential parking all over Oxford.  In the area I work (Summertown) they recently held a meeting so residents and the public could air their view.

The outcome was that the majority of residents were not in favour of the scheme as there is plenty of parking in this area (even when the rush hour has arrived) and they resent the way they will have to apply to park outside their own homes and in some cases pay for the privilege to do so.

Result: The Council are going ahead - for the good of the residents.  Are they mad?

They say that the new Park and Ride being built in Kidlington will take the demand.  This in itself is crazy as the location of this Park and Ride smack band in the middle of an existing traffic hot spot (almost stand still in the rush hour).

Yes I drive a car to work.  Is this a crime because the way I am being treated makes me feel as if I have done something wrong.  If there was another practical cost effective commuting solution - I would take it.

I feel this is a vendetta against motorists in order to exclude commuters like myself from parking in the many available spaces in the Summertown streets.  In most cases - we commuters are considerate to the local residents - ensuring we do not block them in and allowing plenty of space for them to manoeuvre. 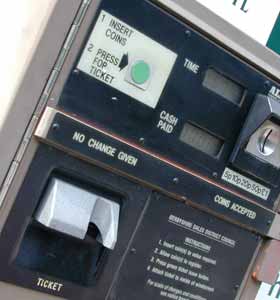 Even when the rush hour has arrived each morning - there are still plenty of free spaces so I do not feel it is fair to say we are depriving local residents of their rights to park.  I used to use the local pay and display car parks until I was forced into the streets by exorbitant price increases.

I live in Witney and am aware of the various forms of public transport.  I have tried to use them in the past but they are completely inadequate.  To do so would steal an additional 3 hours from my life each working day.  I was educated in Oxford and used to bus daily.  At this time - the bus from Witney would alternate its route via Botley and then Summertown.  However when I commenced work - the Summertown routes were scrapped.  Thus from my experience - public transport has let me down and forced me into a car.

Even using the park and ride will impact my daily journey for at least an additional hour and in my case increase pollution as I will be forced to head out of the city and then double back on the bus. I also feel there will be considerable traffic bottlenecks created by concentrating vehicles into areas surrounding the Park and Ride.

I wonder what the residents of Kidlingdon will feel as the Summertown commuters descend on their already overloaded traffic system.  Oxford has recently been criticised as having the worst transport system in the UK resulting in an article on BBC Top Gear.  The strategy is to impact the car drivers - forcing them to use alternatives.  What is not considered - is the fact that there are no practical alternatives - such commuters are forced to continue using theirs cars in a system that has reduced in its ability to cope.

I pay my local and Government taxes including a road tax, which should entitle me to some rights yet it seems to me we commuters are being treated as second class citizens simply because we do not live locally.

We bring considerable revenue into the area.  I calculated that I have spent over £1500 last year with Summertown businesses.  I saw an article recently in the Oxford Mail stating these businesses felt they would not be impacted by the introduction of this scheme.  However - I beg to differ.  They simply are not considering the sizeable revenue delivered by us commuters.  This scheme will force us away from the area and potentially steal more money from our pockets. This extra money will have to come from somewhere and people will cut back on lunches, luxury purchases etc.  I know I will be bringing in sandwiches and voting with my pocket if this scheme is introduced as it seems this is the only message that is understood.  I will be urging other people affected to do the same.

Finally and I also think most importantly, is the impact this scheme will have on working parents with children in school.  The Government is keen to encourage parents - especially mothers - back into work.  They rely on their cars to drop their children off and then commute to work. There is simply no practical way they can do this using public transport.  Even the introduction of using the Park and Ride will reduce the number hours they can work.  It will also potentially put their children under additional risk if they are late picking them up due to public transport delays out of their control (full/late bus, additional journey, strikes, overloaded traffic queues leaving/entering the parking area).

Residents apparently are getting warning notices on their cars, in Marston, which is littering and fly posting, its also potential criminal damage, plus its money with menaces, and its also threatening behaviour with intent. Its also public nuisance, which is a breach of the public order act, and its anti social behaviour. Placing notes on vehicles without consent, in a public place, is unsolicited advertising which is an offence.
03/03 Petrolhead
0

In order to stop this latest CPZ, in Black Bird Leys, the residents need to be targeting the 1984 RTRA, schedule 9 part 6, section 35b, which is the full on legal challenge to a permanent TRO. And the residents also need to cite the 1996 Local Authorities Traffic Orders (Procedures) England and Wales Regulations, section 8 to section 14, and section 6 to section 8, objections, breach of consultation, sub sections 1, 2, and 3.
27/02 Petrolhead
0

Its all kicking off in Black Bird Leys over Residents Parking Permits, that the council are proposing yet another CPZ, which the residents have just told the Oxford Mail, that they dont want.
27/02 Petrolhead
0

Been a really great week long thread on Next Door Neighbour website, about controlled parking zones in Oxford, that discussed people's views on resident parking permits, and the associated charges, and people's opposition to the increasing spread of CPZs in general.
19/02 Petrolhead
1

oxford council might owe thousands of motorists refunds from PCNs that were handed out on defective hybrid unenforceable parking bays.
19/09 Petrolhead
1

Temporary stop notice about to be served on Oxford Council due to their unlawful behaviour at Cowley Marsh Cpz. Possibility this may go all the way to cease and desist proceedings
02/09 Petrolhead
0

I would urge as many residents of cowley marsh to e mail Christian.Mauz@oxfordshire.gov.uk in order to oppose the Cowley Marsh CPZ that is proposed. I would also urge all cowley Marsh residents to e mail their councillor Lubna Arshad for the same reason, and make their opposition to the scheme known.
10/03 Petrolhead
0

Cowley Marsh residents are kicking off over a proposed CPZ scheme, at least 50% of residents are opposed to it. I have heard rumours of a class action lawsuit being considered against the council.
22/02/20 Petrolhead
0

Another anti CPZ meeting will be held next week at Chuffington village hall amongst those in attendance will be Sir Barney Heyho, Tommy Robinson, Kevin Webster, Mike P and Desmond Tutu i will be putting questions to the floor and if the responses to my questions are satisfactory i will be standing outside the big Sainsburys in Oxford with a megaphone.
22/07/13 nick "petrolhead" fell
-8

Down with Parking Controls

Local Councils are like the EU and the European Parliament, a tier of Government no one is interested in. They know it, and consequently abuse their democratic role by introducing all kinds of unpopular laws and regulations. Residential parking control is just one such set of regulations. No one wants it. Had it been introduced by the Westminster Government, the party in power would have lost all their seats. at the next election.

Rid us of these QUANGOs.

Good point well made Prof, I have actually noticed this myself recently, the Parking Attendants should simply ticket those who cause the most problems, or those who park most dangerously. But Parents should use common sense, and park safely and as courteously as possible. I would suspect that those parents in cars are probably those coming straight from Work, in order to pick up their kids on the way home.
I have a certain amount of sympathy for parents who use cars for getting their kids to and from school, this is something I am starting to discover myself, as I have two god children to get to and from school myself these days. The school run is an absolute nightmare. I would think that the parking issues are only going to get worse when that Student accommodation block opens on Copse Lane, where the Cavalier Arms pub used to be.
25/10/12 nick "petrolhead" fell
0

The Resticted Parking Zones are not run properly.Off Headley Way (Lakes) if you complain to the traffic operating company,they are "undermanned" and have a "lack of resources",yet I have heard the County Council makes about a million a year from the scheme ! Parents at schools take no notice and park for twenty minutes morning and afternoon,five days a week,thirty-nine weeks a year ! St.Joseph School is the main local offender (parents can't read ? ).
24/10/12 Prof
-2

Shut The Councils Down

The numpties who run Oxford council and its controlled parking system, a thousand curses upon their heads. May they end up in the deepest level in Hell, and suffer an excrutiating consequence

We arrive in Oxford yesterday evening (Sunday) in Beaumost Street, outside the Ashmolean at a pay and display: The box way labelled "New Sunday and Evening Charges Apply". Greed. Since when has a Sunday evening traffic ever been the consequence of congestion. Ravelling back on the M40 towards London on a Sunday evening, maybe. But not Central Oxford.

Bye bye Oxford. You are a town which is no longer value for money as a day trip destination in our books. Your Council chooses to rip its day trippers off.

That is why there are lots and lots of websites available these days devoted to fighting parking tickets, speeding tickets etc, people are gaining knowledge and starting to fight back.
To take control of the political system will need ordinary members of the public, to join political parties, to stand for election locally, for Civil Parish Councils and City Councils.
People need to start becoming engaged with the process, take responsibility and realise that they can make a difference.
06/04/12 nick "petrolhead" fell
-6

The Residents Parking Permit permit system was introduced not to benefit residents and their parking needs, nor businesses in the local area, but simply to be able to employ otherwise unemployable people, in an unwanted job, to make loadsamoney for parking companies and the local council. It has nothing whatsoever to do with traffic management, nor the proper flow of cars through an area. It solved no traffic problems. It solved nothing. It is a system wholly out of control. No one in government (local or central) wants to know anything about it. Citizens are at a complete loss as democratic control of this matter has been usurped.
03/04/12 Stop this Nonsense
-3

Residents only parking in my street