I cannot abide people who can not adopt the concept of 'keeping left' on Britain's roads when there are more than one lane.  How difficult is it to move left when there is room to do so?

There was a time when the people who took to the outer lanes did so because they wished to driver faster than those on the left.  That's not the case these days apparently!  You also get the stubborn folk who just think that they will get wherever they are going quicker by using a right hand lane regardless of whether they actual manage to travel at the speed limit.

The thought also occurred to me that whilst there are three lanes and people naturally sit on the outside lanes, that this would result in the inside lane suffering less wear and tear and hence lasting rather well.  The other lanes receive far heavier traffic (outside lane hogs) and deteriorate quicker, therefore requiring repair or replacement sooner.  Presumably this means that the local authority would then replace all three lanes with new surfaces.  If all lanes had been used correctly then the lifespan of the whole surface would have increased and thus reduce the need to repair or replace the surfaces as often and in turn this reduces overall costs for road maintenance.  You never know, it could help keep road tax down if the lanes on motorways were used properly.

Are you an outside lane hog?  This sort of driving impacts on traffic congestion... 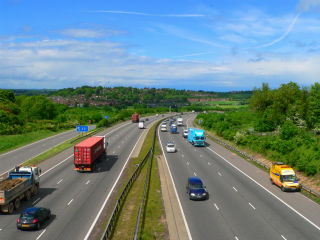 Of course as the governments tends to take whatever they can probably not!  However, I think it would still reduce expenditure on road repairs if they were used better!

This sort of driving also impacts on traffic congestion because initially they cause three lanes of traffic to be contained in just two lanes and that's like trying to fit a tin of baked beans into an egg cup - it just doesn't work.  There are also some people who just stay in the middle lane no matter what - what on earth are they thinking?

I know for a fact that if everyone started driving properly on our dual carriageways and motorways by keeping left then there would be less congestion on these roads and the traffic would definitely flow far better.  So next time you are sat there in the middle lane or the outside lane - move the f*** over!

Forgot also to add, inside lane car hogs know better to never block white van man from entering the duel carriageway, they soon move out into the empty lane.
29/05/18 Guest
1

My gripe is concerning drivers that stay on the inside lane of a dual carriageway ( driving well below the posted limit) when approaching a entry slip road and insisting they have the right of way to block cars from entering even when the outside lane is empty. This action is not only dangerous but can also lead to road rage from other drivers. Anybody who thinks this is clever will one day come unstuck in a big way.
29/05/18 Guest
1

If flashing brights dont work, he needs a little nudge from behind. That should shift him. Lucky he aint in south Africa.
03/01/14 Clint
0

Happy New Year Grumpy. I would not drive a German car if you paid me. I use the motorway safely, but I must admit I would overtake you on whatever side was available to me . I am curious about your motorway driving please do not take this as a criticism but why do you drive the way you do?
03/01/14 boblet
0

Grumpy xx: You (and the many people that do what you do) are not using the road correctly. Speed limits and correct usage of multiple lanes are not the same thing. Motorway conditions might dictate that no one is able to drive above (for example) 40mph however, you are still required to keep to the left. What your actions achieve is the limitation of everyone on the road behind you to your speed. To suggest a reason why this might be a problem... What if your personal speedo isn't 100% accurate at 70mph? You've now dictated an incorrect maximum speed to the entire motorway. Go you!
03/01/14 Read the Highway Code
0

I use the motorways a lot now and it annoys me intently when some moron (usually a BMW driver) behind me flashes me to move over when I am already driving at the maximum speed limit. What they are trying to bully me into doing is to break the speed limit so that they can break it too - not keep to it. Now I just ignore them - they can flash all they like - and eventually, in a fit of frustration at not being able to put their foot down to exceed 90 mph in their BMWs (normally) they just overtake me from the inside instead, which is against the law.
22/12/13 Grumpy xx
-6

Drivers who hog the faster lanes when they aren’t overtaking do it out of laziness as they do more overtaking and can’t be bothered to adopt any lane discipline. Obstructing faster traffic instead of moving over to allow more through also adds to inefficiency.
So these drivers are lazy, inefficient and to top it all, selfish.
16/01/13 Traveller
-7

My bad I got my lanes mixed up. People hog the outside lane at the speed limit! So what's your problem. Oh wait, you want to break the law
04/01/13 Max Power
-10

I'm sue that it's because the perpetrators lack the confidence required to look in the mirror, signal right, and steer slightly to the right in order to change lanes when it's safe to do so.
09/11/12 Kiteflyer
-6

Long live pedantism eh? Perhaps you might have considered that your own common sense would tell you when it is OK to move back into the left lane, and when it is OK to stay out to overtake.

Isn't the point here the mindless morons who coast along in the middle/outside lane for miles and miles with NOTHING at all in the lane to the left of them? We've all seen them. This surely is the issue. Grumpy old woman is right - "personal judgement". And probably courtesy to others as well.
Just my 2p...
09/11/12 Oi
0

"Doesn't it depend on personal judgement though?" GOW

I have fitted to my car a "Phase variance capacitance triangulator thingy" that I purchased of Mr. Spock, this lets me know when it is correct to continue in the middle lane to pass "stragglers" or to pull in behind them, then pull out again to overtake them.

Doesn't it depend on personal judgement though? Lorries don't all travel in convenient groups; you may get past 3 or 4 and then see another just ahead of the group. You can't get out and measure the gap so you have to use judgement.

There will always be another lorry somewhere in front and one person's "weaving in and out" will be someone else's "safe pulling over between overtaking manoeuvres".
09/11/12 grumpyoldwoman
-6