Last night I travelled from Chatham in Kent to Walton-on-the-Naze in Essex, by train, with my big blond Irish wolfhound, Barnie, and a large trolley suitcase and a knapsack (my car broke down recently).  What would have been been a 2 hour journey by car became a theoretical journey of 3.5 hours by train, but in reality took A LOT longer because:

b) the train personnel on the train from Chatham advised me it was ok to go via Victoria and then the Underground for my intended destination, all the while seeing me with a big dog and much luggage, and, to cap it all,

c) a very stern and unsympathetic police woman at Victoria told me I was NOT allowed to take the dog to the Underground because "all dogs MUST be carried on the escalators" and there are NO lifts at Victoria!!  My dog weighs 11 stone, so as for carrying him down the escalator...  I think not!

London Underground - no dogs on escalators unless they are carried...

So I had to take a bus (unhelpful directions about where to find the correct bus stop from bus information booth), the bus driver would not accept my onward train ticket as permission to travel and I had insufficient money on me to buy the bus ticket, the bus driver advised me I HAD to go upstairs on the double decker bus with my dog.  My luggage was too heavy to also carry up the narrow bus stairs so I had to leave it unattended downstairs on the bus.  Then of course the road traffic meant I missed my connecting train at Liverpool Street, which wouldn't have happened if I had been allowed to go down to the Underground on the escalators asI have done in the past, mindful of the concern about making sure my dog's paws don't get trapped in the escalator. 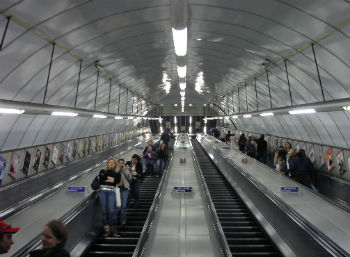 In the end my poor dog was so desperate for the toilet after so many hours that, on the train from London Liverpool Street to Clacton, he started pawing anxiously at the doors, attempting to jump onto the seats to get closer to the windows (he was looking for ways off the train) and rushing very strongly along the carriage, in his attempt to show me how badly he needed to go.  I felt very sorry for him but there was nothing I could do, so he panted in bowel pain for the next 45 mins until I could walk him at the beach when we finally arrived.

I realise the policewoman was there to enforce the law and ensure the safety of the public, but why have a LAW that states no dogs on escalators unless they are carried?  Surely that is more the realm of guidelines of behaviour, rather than absolute rulings?  And, moreover, WHY NOT have a lift at Victoria to access the Underground?  It's a major train station in London, and although dogs needing to travel is not a priority to add the expense of a lift, disabled people wishing to travel ARE and this should have been addressed a long time ago.

Does anyone have any similar experiences with large dogs on the Underground (in terms of accessing the Underground, rather than actually being in the carriage) and has anyone found some sensible compromises? Believe me, the return journey next week will be via London St Pancras as they have lifts there...

Apart from guide dogs and working dogs they should all be banned. They are noisy dirty unhygenic creatures oh yes and dangerous to
23/04 Cromwell1646
0

Dogs can't stand on escalators! For heavens sake are you mad, I've never read so much drivel . The police woman was correct in what she said, the consequences of the animal getting it's leg stuck are unthinkable. You just had a bum day.

Anyway my solution is, see them gaps between the escalators, The Underground should put little dog steps there instead of them blue rectangular boxes. Yes little doggy stairs is the answer we are looking for, my dads patterdale terrier would zoot up them in no time, and guide dogs could too.
06/11/15 Doggy Stairs, Way to go
-1

I think large dogs should be allowed onto the tube to bark at/bite those greedy bankers and lawyers.
04/03/14 Dave
2

So 'tough' to people who don't like dogs, eh, Nikki? You might not consider your dogs to be unpleasant but it's quite likely that others do. Your 'tough' comment shows the usual lack of consideration that dog lovers have for people who don't like dogs. Dogs have no place in the confined space of an Underground train. I too don't have much time for some of the people you describe but why add smelly, pooping, barking, biting, lolloping, drooling, hair-shedding, over-indulged dogs to the equation? Underground trains are for people, not animals. And it's just as well that the journey with the Irish Wolfhound didn't happen during the summer months as most of the beaches in Clacton thankfully have a dog ban.
04/03/14 Misty
-1

London is too busy a sh1thole for large dogs, especially when large dogs generally mean the owner is a low life scumbag on benefit.
12/11/13 Nick
-6

With a few notable exceptions, what a load of miserable gits you are!!

Why should someone not have a large dog in London?
Why should someone not be allowed to use a fire escape exit if their dog is too large to be carried on the escalators? (The OP doesn't say, but there must by law be means of escaping from an underground station, so there would have been emergency stairs somewhere).

There is absolutely no reason why dogs should not be taken on the London underground, or on buses. Frequently those dogs will be better behaved - and less smelly and unpleasant - than many of the humans!

For those people who don't like dogs - tough. I don't like rude, smelly, drunk, over-sexed human beings but I have to suffer them in my space when travelling on the underground. My dogs are not rude, they do not smell, their manners are exemplary and they most certainly never get drunk.
12/08/13 Nikki
-5

Oh and as for a member of staff carrying your luggage ? you packed it you know how much you have you carry it, the staff arent there as porters to you and have the running and saftey of the station to worry about.

How much delay do you think using your supposed escalator dog mat would cause ? espc getting off a fast moving and packed escalator ?
28/06/13 Bren Again
-4

Victoria is one of the busiest stations on the entire underground network so stopping an escalator is a massive no no, its a station that is constantly busy from open to close.

As for having a lift that station was built in the 1800s and is only just having a rebuild to add lifts for disabled access, even the Victoria line when built in 1967 didnt have lifts.

Carrying your dog has always been a byelaw for escalator for the safety of your dog catching its paws in the treads which has happened and is not a pretty sight, also to allow other people to pass you on the left so you are not delaying others, as for on the buses again this is a byelaw so that your not taking up room for standing passengers and for space for wheelchairs, buggies and so on.

You set out with your large dog and and your large luggage without checking your route and missing your train, this is your fault at the end of the day, not the supposed jobsworth staff, the rules are there for your dog, your safety and the safety of others
28/06/13 Bren
-8

Night Owl. You are correct, no need to use an escalator to travel on the Circle line from Victoria, besides many stations have a fixed staircase you can use, and staff can even halt an escalator for you to use if it does not cause to much disruption to other people.
04/03/13 From the heart
-1

I am a bit puzzled by this gripe as, if I am remembering correctly, there is no escalator connection between the main line station at Victoria and the circle line to get you to Liverpool Street station. There are just stairs which you can take your dog on.
08/12/12 Night Owl
20

Guide dogs are needed by the blind for getting around generally, not just in case they fall off the platform!!
05/12/12 anon
5

I actually have another opinion on dogs on the underground transportation, I don't know if this will go over well though. Dogs in general maybe not a good spot for dogs to be, but guide dogs yes because they are helping out people in need of them. I can't picture dogs in an underground train station really. Too noisy with trains coming and going, as with people to.
05/12/12 Donna
-3

Get rid of dogs

Doug: Yes I am a woman, but certainly not mean spirited, selfish or lack of any warmth at all. I am not going to say sorry for who I am either. Yes dogs going on buses are different in any areas of the world, and for Guide dogs they are allowed on local transit buses where I live in Canada. I may come across as a mean person at times, but I do not mean to be as I am mostly a happy person. Some people on here may very much disagree with what I said about myself, but I don't care. Just saying who I really am. As I am just speaking my mind like everyone else here.
03/12/12 Donna
-2