My experience recently went like this.  I had a job interview in London, to which I needed to travel from Devon.  I checked train times, and found that the earliest train arrival was 08:49 into Paddington.  I agreed an interview time of 09:45 as the location of the interview is 30 minutes by tube from Paddington, and my past experience of this early train is that it is generally 5-10 minutes late due to volume of trains waiting for platforms at Paddington, and I did not want to be rushed.

On arrival at my local train station at 6am (for a 6:25 train) I noticed that the departures board showed all eastbound trains somewhat delayed - all around 20 mins.  Two earlier scheduled, but slower trains were still waiting to depart.  I therefore asked at both the ticket office and the station manager whether I should board the first departing slow train, or wait for the 'fast' service I was booked on.  Both said that the delays were due to over-running engineering works and all 3 would be 20 mins late, so first to my destination was still the fast train.

Fine I thought. I waited, and watched the other 2 trains depart.  As the second one pulled out of the station - the delay time suddenly changed on the board!  My train was now expected 30 minutes late.  By the time it actually departed it was 40 mins behind, then when we passed Taunton, it was an hour late.  No information was given on boards, until the ticket collector came round after Taunton (next stop Reading, so chance to change trains).  He informed me that we were now expected in London an hour and a half late as we had 'lost our place' in the train queue and one of our engines had failed. 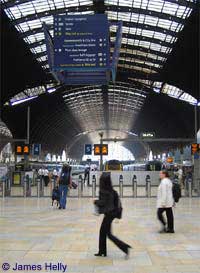 I know my rights under the passenger charter...

Okay, so now I had to rearrange an interview, quite possibly affecting my chances of getting this job.  Not the fault of the people that day, so I thought I would take it up with First Group customer services.  I sent some rather angry feedback via their website and after only 3 days, received a response.  A completely stock response, "Sorry to hear you are unhappy, we will refund the single journey ticket price."  I know my rights under the passenger charter, and had already requested a refund through the website where I booked the ticket.  What I had asked for and didn't receive, was some detail on what the company had actually learned from this incident and what they are going to do about changing things for the better.  A pretty standard practice nowadays in dealing with feedback.

What I received next was a list of the train company's wonderful achievements.  Reliability up, trains on time and prices cut!!  It as if this was calculated specifically to annoy me.  I am not sure exactly what factoring is done to produce this complete rubbish, but I believe that trains which are less than and hour late don't even count towards the company failure rate.  So a train that is 55 minutes late is negligible to them!  Am I the only person who believes that on time should mean ON TIME?

I am still awaiting a response again from First Great Western, to see if anything has been learnt from this experience - but I don't hold out great hopes.  I am an environmentally conscious person and would prefer to use train travel for business (I can't afford it for personal travel these days).  But the complete lack of reliability of the train service providers means that unless I have a number of hours lee-way for delays, it is not a viable method of travel.

I have written to my MP about this in the hopes that the government (who supposedly want us to go green and use cars less, and who still subsidise our railways to the tune of many millions of pounds a year) might re-nationalise our railways and sack the current batch of incompetents who run them at the moment.

Instead of griping why do we not work out how to collaborate and actually get even? So many of us. £1 each and I am sure we could take out a full page ad to shame the directors in Metro.
09/10/14 Rob Kay
0

For a 0945 appointment in London, and travelling form the West Country I would have been inclined to travel the day before, off peak, and offset the money saved on that ticket as against a standard day ticket to purchase a hotel room in London for the night. A break before the interview, and arrive for it refreshed rather than annoyed and probably slightly dishcevelled as the result of having to leave very early.
13/02/11 wbph
-16

If I am correct, Banbury is on the Chiltern Line, which consistently is rated as one of the best operators in the country. I use it quite often and ahve never had a bad experience, other than one official pompous petty little jobsworth at Gerrards Cross who was out to make everyones' lives difficult one evening in the winter.
21/01/11 MikeP
-11

We don't want peasant hicks from the country taking our jobs in London. You're only reducing the overall rate of pay. Keep out, or I'll route your train to Crewe and Carlisle.
21/01/11 Stay Away
-18

I have been suffering the daily horror of First Great Western now for seven years - have decided to move rather than continue as am sure the daily stress is too much.

Wednesday 19th, cancellations and turmoil on usual 7.15 from Kingham. So 20th decided to get 5.56, what a surprise train cancelled and disruption to all main commuter services.

So instead, went to Banbury where there is a brilliant, cheaper, non reserved and altogether more pleasant service. Advise you all to try!!
21/01/11 Nerolibra
-4

I get the morning rush hour train from Maidenhead to Reading - 3rd world cattle class aside - there is regularly at least one carridge for 1st class - on several occaisions when the train is so busy theres hardly room to stand - ive sat in 1st class only to be thrown out by a jobsworth threatening me with a £20 + fine if I dont !!! When ive protested and mentioned of medical issues ( I have low blood pressure - so on cold days especially I need to sit ) ive been told rudely that I pay for the journey and not the seat and that I should ask a passenger to move instead !!!!

its an absolute joke - and im sure against health and safety regs that an entire carridge is left empty on a train where people hardly have room to stand.

I could just about deal with the late and crowded trains - but FGW staff are at best rude and unhelpfull and frequently aggressive and from a female point of view - often intimidating.

perhaps im old fashioned - but on numerous occaisions when there has been an issue with trains - ive approached staff -confused and upset about how to get home - only to be met with utter disrespect and lack of concern about my situation.

.. I appreciate they have a difficult job to do - especially the guys on customer serrvices - but that is what they are paid to do !! and in my book there is NO excuse for the way I have frequently been spoken to and treated by FGW staff..

im now at home - having given up any hope of getting to work in time to do anything productive today... no replacement buses and no hope of getting my fare back plus lost wages while fgw fat cats count their xmas bonus and I get to do it all again tomorrow

Yesterday: Leaving from Maidenhead to Paddington station. I had waited over 40 Minutes for my train. No reasons explained. Then on the way back, I had waited another 50 minutes to get back home that evening.One train was so badly packed with people, they even had to have a couple of platform managers around in order to push the doors shut. This type of thing happens ever to often.

Ive now taken it as a given, I will always have at least 2 journeys where I have to stand for 40 minutes a week because they supplied a 2 carraige train and everyday its will be 50/50 if my trains arrives in the time it should. I have no idea how they work out their punctuality targets, but its either worked out incorrectly or otherwise they are fabricating it (either would not be surprising). In the past they were penalized for punctuality , yet these days they're not but the service is no doubt worse than its ever been.
09/11/10 great western commuter of 7 ye
7

Every morning & evening all the peak trains are so busy that you have to wrestle your way in. Don't know why we can't have more trains and more carriages? Specially when peak time commuters pay over the odd compared to off peak fares.
21/10/10 MK
1

Every morning this week my train from Reading to Paddington has been delayed by upto 20 mins, coming home once an hour dealy.No information or real reason.Argh
08/10/10 Phil
-7

The trouble is that today's trains are too RIGHT-WING. Time for socialists to take them over. Make the customer matter - not profit.
17/08/10 Terry
2

Your gripe and upset etc at First Great Western is understandable but "Over-running engineering works" is highy likely to be the fault of the infrastructure owner, i.e: Network Fail oh sorry I meant Network Rail. Take the compensation and feel lucky you got any at all for that matter.
12/03/10 Railway Person
1

Actually if you are 59 minutes delayed it counts under 1 hour and still no compensation!
25/01/10 Another disgruntled customer
-13

hi anna, it's not true that lateness is only measured if it's within an hour... with most of fgw's services, a train fails to meet it's target if it is over ten minutes late.
01/07/09 joe
-12

Since Sept last year, I've made at least one return trip from Devon to Paddington each week. So far, there's been one train cancellation (just before Christmas) and one serious delay (due to snow).

The expectation of no failed journeys and no delays at all - I.e. perfection - on such a complex network is totally unrealistic.

What you could reasonably expect more of would be working amenities of a decent, civilised quality - I.e. toilets!
22/02/09 Sam
-10