I've been commuting to work by train now for over a year and have paid the rail companies somewhere in the region of £3,500 in season tickets.  Well to tell you the truth I don't think that I have exactly received good value for money in that time.  I've used a number of different train services such as Chiltern, Great Western and Virgin etc. and it's always the same old story of late trains and very costly season tickets.

We were all affected by the travel chaos that the country was left with after the Hatfield crash and the huge repair programme that Rail-track undertook afterwards.  But even now certain train operators have still to come up to scratch and I think it's high time they put the passenger first instead of their own profits.  The average commuter parts with a tidy sum of their hard earned cash each month and yet still spends a record amount of time standing on some platform listening to another announcement informing them that their train will be late or has been cancelled. 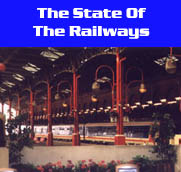 Who would want to give up their car and chance their arm with the state of public transport as it is at the moment?  The buses are over crowded and infrequent, trains are erratic as well as expensive and if you live in London the only other alternative is to do battle on an over crowded and dirty underground system.

Another thing about commuting to work by train that really winds me up, is the cost of refreshments.  How can the rail companies justify charging the extortionate prices that they do in buffet cars and for snacks and drinks from refreshment trolleys?  Isn't it enough that we already fork out a kings ransom for the ticket?

I've come across a few sites on the Internet that publish passenger complaints and in some cases actually forward the letters on to the transport company involved, so they are definitely worth visiting.  There's also a site called

Dear Railway Users,
I am writing from an award winning television production company called Dragonfly Film and Television, who are the makers of documentaries such as "One Born Every Minute" and "The Family".
We're currently producing a new prime-time documentary series for Channel 4 about the UK complaints and customer service industry and we are looking for people who may wish to tell us their stories.

We are looking for people who are currently pursuing an ongoing complaint or who regularly complain about their train journeys or travel experience for a Channel Four documentary. No complaint is too small and we would love to hear from people who can share their experiences and give them a platform to voice their grievances.

I take the train from Gravesend daily, and lemme tell you those railroad cars are the most squalid, filthiest ones I have ever encountered. The whole of that line is similar.
However, conversely, they seem to run on time for the most part.
21/06/13 Cornish Roy
-2

My gripe is not really for me personally but it affects those i know.
Basically, I live in Dartford, Kent which has a great service of 3 platforms towards London and 1 towards medway area.
The gripe is that dartford is just outside the hallowed area of being within london travel zones which means you cant use your oyster card on the trains and have to go by bus or car to the next station london-bound to use it as you end up paying a lot more for buying a train ticket from dartford. BoJo wants to include us on oyster network as we are inside M25, which is right plus like i said there are buses who take oyster that go from dartford and also go to bluewater shopping centre.
25/05/13 ahforfoulkessake
-2

jobby, 16th Jan.; "Boblet, how many pen names you got dingo, I know you are really grumpyoldwoman, stop stringing us all along with your crazy candi-floss, old hoss."

jobby, today; "Ah, the orginal gang of three emerge, victorious in their solidarity against lil old me."

Besides, I'm sure you can find the odd (!) chum to take your side. Like Mary Bumall for instance.

You also said today; "Boblet: I have always tried to help others during my life. My motto will always be Help others and give something back."

Well, I think it's about time someone pointed out that your so obviously mendacious "I've been there too, buddy" tales are an insult to those who have genuine problems, not a help as you so fondly imagine.
31/01/13 grumpyoldwoman
-2

And thirded, if there is such a thing!

Your comment about the Trojan was excellent, probably went over his head though.
31/01/13 Friday Lunchtime
-7

I think we should go back to the steam engine fuelled by horse manure. We need a champion who is an expert on horse shlt. I nominate jobby do I have a seconder?
30/01/13 boblet
-2

I'm writing a magazine article on cycle-commuting, and would be interested to hear from commuters who *could* bike to work, but don't.

Is it something you've just never thought about?

Or if you have considered biking to work, what sort of things are putting you off?

What sort of things might make you consider trying it?

And - most interesting, for me - if you work alongside people who commute in by bike, what sort of image do they have in your workplace?

To help you cope with commuting by train - read "Going Off The Rails - the madness of John Biddle" the comedy novel by Keith Mapp. It will tell you why the trains run late so often. There is a reason - and it's not the one you might expect. Reading it win't make the trains run any better - but it might make you laugh while they don't! Find it on Amazon now.
30/03/11 The Author
78

Is there a customer focus group or similar for Southern Trains? Some medium by which complaints and/or comments can be fed through official channels to management, rather than me impotently sending queries to Southern's customer feedback email address and getting standard replies about signalling problems in the Caterham area?
19/01/11 Deedee
71