One thing that really bugs me regarding transport in London is the service of the C11 bus that goes through west Hampstead, Swiss Cottage and Brent Cross.

Not only is it inefficient and never on time, but the drivers are slow and have a problem a) noticing the red light 'stopping' sign when it is displayed in the bus and b)seem totally unable to hear the bell to stop, which means they drive straight past your stop.

Today, a driver was unable to attempt to park the bus at the shelter because he was not willing to try to park in a space that was taken up by cars - in fact there WAS enough space for the bus to pull in if the driver could be bothered to manoeuvre.

The bus drove on to the next stop and it was so far away from where I intended to get off it made me late for work because I had to walk all the way back. 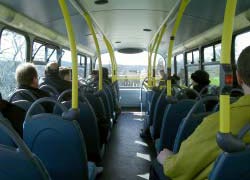 I once wrote to Transport for London about the frequent lateness of the C11 and received a letter explaining they do try to be on time, along with a coloured bar chart that seemed to insinuate the C11 left the garage every few minutes nice, but it doesn't help me when I am frequently made late for work thanks to the C11 bus service!

The bus never comes on time. There is a timetable on the app and the bus never runs every 15m. Last time I waited over 30m for a bus. They need to increase the service. Really bad service
15/06 Cali
0

It is a pandemic time c11 ttoo packed . Not on time the services are very bad.
Route from Archway to Brent cross. It is not fair for the people. Need to increase the frequency. This route population has gone up so do the frequency of the buses should .
We deserve better services from C11
08/06/21 FREEDOM FIGHTER
1

After waiting 15 mins for a C11 it turned up and would not let anyone on as it was a school C11 at 9.15am! I thought schools started at 9'oclock. It doesn't matter that it is also a bus that goes to the ROYAL FREE HOSPITAL where people have appointments and like myself work there. The service has always been rubbish but you are now just being completely appaling!
20/10/20 late for work
1

I have been using C11 for a long time but now it's getting even worse... You wait for more than 14 min to get in one and it gets so packed specially in the morning... Firstly I believe they should use big buses for this route at least in the morning's and after 3pm this would help with the crazy packed bus... People fight to get in I get so disgusted... If I go early to the bus stop instead of getting early at work I'm just there standing in the cold waiting and waiting and then to get pushed... It's bad! Hopefully one day they realise we need bigger buses and more often...
15/11/19 Annoyed
-1

Would it not be easier to send 268 route from Finchley Road via 31 route and Englandâ€™s lane and Belsize Park Stn to Golders Green and C11 from Brent Cross to archway via Belsize road to improve service! To royal free ? Due to overcrowding on c11
11/12/18 Anonymous
-2

If passengers can drive bus company are recruiting even on c11 route Iâ€™m a driver and let me tell you this c11 route is shocking tight roads always have bin lorries or traffic on peak times canâ€™t run on time and drivers canâ€™t push the bus on time due to mistery travelers on the bus and canâ€™t make up time due to high volume off passengers on stops if can do better go for it appreciate drivers bcuz not many going to be left read papers different companies giving Â£4000 if have experience ? Shortage off drivers hope it continues
11/12/18 Ash
1

This is insanity! Most people who use buses to get to and from work (as opposed to needing a train for work purposes) do not have the privilege of an on-time service. If people who work in town are given this privilege, where does one draw the line? the countryside but not urban ? bus company staff but not mind-readers Should other people using public transport also get a pristine ride?

The problem is a lack of timetables and the solution is for local bus companies to improve and subsidise their services to reduce passenger volumes and focus on comfier seats . In fact this will not put off passengers as there are too many of them, or to put rowdy passengers off the 'bus, and call the police - transport police even.
15/04/14 collar
0

Anonymous, that's the point. The departure boards don't match the actual service!
This C11 route is frustrating. Even from the departing stop at Archway it's unreliable. Last Sunday 6th April 2014 one failed to show up (half past 8) then the next one, scheduled 17mins later was late! Today it (8.30 one) didn't even show on the boards and was late. I was quite annoyed to see it go passed me after I decided to walk to work not to take a chance to be late. On the way back, same problem! Departure boards are inaccurate by far. You just never know if there's going to be one in 4 minutes or 40 minutes. Frustrating!
13/04/14 frustratingly yours
0

Why would you wait half hour for any London bus these days? Why not check the time it's due before you set out from your pc or mobile?
11/04/14 Fed up Pedestrian
0

I am very upset with this route is always irresponsible, and drivers never rush they drive like snails, I always arrive late because of them, I wait half an hour all the time
11/04/14 anonymous
0

The C11 route is as bad as people suggest. This evening my wife and I waited 3! minutes on Mill Lane from 6.10pm until 7.41 before a packed bus arrived. When it arrived it was packed to a dangerous degree. The driver ignored all complaints from other passengers as to the reason it was so late. Earlier this week I waited at least in excess of 15 minutes and this is not unusual. Complain to TFL and as many other parties as possible. Let them know what the public has to put up with.
24/02/14 Anonymous
0