Last December Greene King removed our locally brewed beer (Harvey?s Best) from one of its pubs The Lewes Arms.  Along with many other locals who used to frequent the pub, I now drink elsewhere now, but miss the pub?s features and clientele.  I miss the friendly atmosphere and familiar surroundings.

Greene King took over this pub along with several others back in 1998 and initially left the Harvey?s in, but this all changed in December 2006 when they decided to remove it and replace it with their own beers.  This comes as a bit of a shock considering that Greene King is currently running an advertising campaign urging people to support local pubs.

Support for a boycott of The Lewes Arms and indeed Greene King has been growing in recent moths.  Take a look at the web site ?Friends of The Lewes Arms?, or indeed have a stroll around town and you?ll see a number of people sporting the boycott badges.

Perhaps more sinister is the fact that our comments on the Greene King forum pages have recently been censored.  Whilst these comments were against Greene King's decision making and decision makers, they were not obscene, personal or prejudiced other than against their decision to withdraw Harvey?s A decision that seems more out of spite than for profit since 3 out of 4 pints beer drawn in the pub were of local brew rather than Greene King?s own ales. 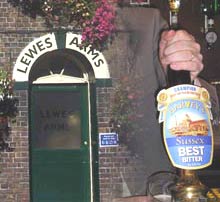 Currently I have been banned from the discussion forums on the Greene King?s web site unless I obtain a different IP address.

We know we will most likely lose this fight, but we want to highlight the fact that whilst Greene King is advertising full support for the ?local pub?, they appear to be doing the exact opposite.  If you want to keep tradition and the irreplaceable British pub then be concerned now.

If you feel strongly about this or there are any more of you out there suffering corporate style bullying then and take a look at the sites below, join in the discussion and get involved.  British pubs and drinking do not need influencing by a corporate board interested in only making money and doing so with total disregard to traditions!

Further information about the boycott

The Lewes Arms - A blog celebrating a very special pub and supporting the 'Hands off our Harveys' campaign being run by the Friends of the Lewes Arms.  We support local beers and local and community pubs.

I suppose I should admit to a little smugness. However the London Pride at £2.90 is a little unneccesary I feel. Especially with the Harveys at £2.60. However I dont go there as regularly as I used too in the days before the Greene King circus came to town, only £2.25 for a pint of Harveys where I go now! And regular free live music too.
26/09/08 Shy Vera
-2

You have a choice of Fullers AND Harveys Shy Vera? Are you trying to torment us drinkers who yearn for even one decent real ale pub within walking distance of home? I've sampled both brews mentioned and I know what I'm missing!
24/09/08 Edgar
-17

Pubs used to be a focal point in society but those days are in the past I fear. With money getting tight, unemployment on the way up and the like who can afford to drink in them any more? Good result on your local in the end though. Hope they keep the prices down to a reasonable level.
24/09/08 Can't afford beer
-1

I can now confirm that the Lewes Arms is now a Fullers house. With the new landlord alone there is already a much better atmosphere in the pub and selling much better beers, including the local brewed Harveys Best.
Hopefully one day it may become the establishment it once was, certainly with GK out of it there is an excellent chance of it happening.
My condolences to all drinkers reading this if your local is a GK house. I am sure some are probably good establishments but our experience of the LA and other pubs in the town determine otherwise.
Cheers.
24/09/08 Shy Vera
5

After all the kerfuffle over the Lewes Arms it is now rumoured, locally, to have been sold to Fullers and that Greene King refused to sell it to Harveys(the local brewers whose withdrawal of the beer from the LA created the whole situation in the first place). How pathetic is that from GK
07/08/08 Shy Vera
1

You know sometimes somewhere the pub must improve by being taken over by a large corporation, statistically at least. What really gets my goat is the inconsiderate attitude that all pubs should be the same. Same decor, same preprepared food etc. When GK really moved in to the Lewes Arms they produced a booklet for the staff, even suggested the type of music that should be played at specific times during opening! Never mind the existing clientelle. As it happens one of he best features of the Lewes Arms was it had no jukebox, no television and no fruit machines. It was a drink and discussion pub and it was very good.
Why do the suits, and in this case those some 150 miles away think they know better than the 'landlord' what the pub needs and how it should be run. Jumped up marketing oyks is all they are and soon they will be the only types able to afford a pint or two as well.
Well they ruined the Lewes Arms and I guess many more previously good establishments too. Pillocks.
09/04/08 Shy Vera
-24

Sorry I got my facts wrong! I must appologise. It wasn't Greene King Who took over the Paines brewery it was Tolly Cobbold.
22/03/08 cheesenegg
-19

I haven't been to Lewes in quite a long time but I do like Harveys ales. Anyway what I really would like to say is that Greene King should be boycotted everywhere. Many years ago Greene King took over the Paines Brewery, which I think was in St Neots, now at that time I considered Paines EG as the best pint of beer I have ever tasted in my life ever! and what did Greene King do? They shut down the brewery. Unforgivable!
22/03/08 cheesenegg
-14

Yes the regulars did well in making GK reverse their strategy with the Harveys. Sadly due to the time it took and we all drank elswhere and most still do, GK lost the soul of a good ale house with an excellent atmosphere and as yet it is nowhere as good as it used to be.

I dont know what it is but these corporates have dumbed down the landlords role. they are there just to fleece you now and to do that they dont need to get to know who you are!
07/12/07 Shy Vera
-6

Hey guys. It's good news all round I think. About time that the big breweries like Greene King paid some notice to the punter who wants a decent pint of beer. Well done The Lewes Arms for standing up to them.
29/08/07 Real Ale Lad
-6

Further to our 'victory' at the Lewes Arms it is very surprising that Greene King have not put Harveys back into its other pubs in the town. They have been made aware of the popularity of the beer and clearly do not want to encourage those that do not wish to go to the Lewes Arms every time theu want a pint of it! Quite astonishing! Poor marketing? Additional embarassment perhaps, who knows? Whatever it still ekes into what they think a pub should be like rather than asking clients opinion.
30/05/07 Shy Vera
-10

Thank you for your input and support. I am sure GK beers taste just fine where they are brewed, just as Harveys does here in Sussex. Its all down to the water and how the recipe has been tweaked over the centuries. Thank goodnesss for regional beers, something to look forward too on those trips away in the UK. So why do GK insist on closing them all down and brewing them in BSE? Bad move in my opinion. Too little variation maybe, that sounds a little odd from someone who has just helped a campaign for its local ale doesnt it!

Thanks again to everyone who had input here.

Congratulations Shy Vera.... I'm happy for you that all of your efforts have paid off. I've got to be honest and say that I didn't think they would! It goes to show you that GK are not as bad as you thought.
Incidentally, their beers are not all crap. IPA is actually a very pleasent drop if drunk in suffolk/essex border region.

For those who are not in the know some fantastic news. Greene King have relented and as of today, 20th April Harveys Best Bitter has been reinstated in the Lewes Arms, with a promise that the seasonal beers will also be making appearances.

Fantastic news for the little guy who in numbers can achieve the opposite of what the selfish bulldozing bully boys press to want. that includes at government level to if you want it bad enough.

All we need to do know is keep GK aware that thier crap bitters need to step up to the mark.

Sorry my previous post is not correct, it should say.... And what is behind the idea of selling their own beers as guest beers?
30/03/07 Shy Vera
0

People who don't know how to make tea properly