I understand the drive of motherhood and the ticking body clock.  I know I was lucky having three children close together (three in three and a half years!).  At the time I was distressed, relatively poor, tired and didn't feel lucky, but in retrospect I think I was.  Now I look at mothers who put off motherhood for numerous reasons, mainly career, home and possessions, and the need to have it all.  But my gripe is simple really, many women leave it so late to make a decision and then convince themselves that their children have benefited from it.  Their children have a nice home, nice things, nice holidays and often do not have to share it with any siblings.

When the children were little we didn't have money, and lived on cheap meat and second hand clothes and toys.  We went camping in a borrowed caravan and a tent with no electrical hook up, but boy did we have fun.  Blackberry picking was a staple part of our diet in the autumn, talk about hunter gatherers!  When the eldest was ten, I went to university to escape the poverty trap. 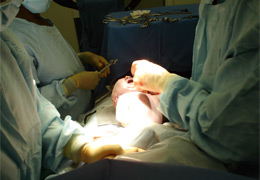 Yet this Christmas I compared my heaving household to that of a friend...

Yet this Christmas I compared my heaving household to that of a friend.  We had four generations of the same family dossing on cushions, food, wrapping and kids everywhere.  My parents have been lucky to have built a loving relationship with their daughter (me), my children and their children, but more the point my grandchildren know their great grandparents and love them to distraction.  They know their roots and their history.

A friend however, chose a career, a beautiful home and late in life chose to have one child, just in case she missed out.  By the time her daughter was eight, she had lost all her grandparents and had no siblings.  Now her daughter is an adult and has chosen not to have children (perfectly entitled to make that choice!).  My friend knows she will never have grandchildren and if they do arrive, she will most likely either be dead or too old to play an active part in their lives.

So my gripe is what is the cost of leaving motherhood too late, and is the price really worth it?

I don't think it's really any of your business. I grew up in quite a large family and money was tight but I also had to work as we ran a family business. You may not have much money but I expect there has been some hard times so it works both ways.
09/03/14 Works Both Ways
0

Those were the days

Some people may be career driven thinking they don't want a family only to realise later in life they really want one. If you don't know the facts you can't really judge your friend and may be her child is quite happy being an only child. Some siblings can compete and some big families can have big squabbles.

I remember some of my happiest moments as a child when I used to visit a childless couple (neighbour) and although they were older they were great fun to be around. I used to hang their Christmas decorations for them, we used to watch all the soap operas together. I used to go walking with them in the fields. It was great. I wasn't the only child and had lots of friends but I used to class this couple as really good friends and am still in contact with the female neighbour who is now very elderly. Her husband passed away several years ago.
04/05/12 Those were the days
5

I would just like to put to you that many people do not 'choose' to have children later in life. For more people than u probably realise, it is out of their hands. Some people do not find someone with whom they want children with until they are older or a large number of couples have fertility issues and have no choice when or if they have children. Many people struggle for years and years trying to conceive and do not tell anyone about the struggles they are going through. If these people do eventually conceive they still dont always like to tell people that they had struggled for so long, some simply might say that they chose to wait for whatever reason. But even if someone does have a choice and they 'choose' to wait til they are older and focus on their career What is so wrong with that?? They are making a very sensible decision so that when they do have children they will have a financially secure future. How can bringing children into a financially secure situation be a bad thing??? Although I would never judge, I'd be more inclined to think it was worse if they chose to have kids when they couldnt afford them than the opposite.
10/02/11 Natz
7

Being a granny, I tried this Xmas happy family lark , Xmas before last. Before that we used to go away to warmer climes for Xmas week so having pressure (making us feel guilty and selfish) put upon us to stay at home. We tried it. Never again. I cooked and skivvied all Xmas with little help from the adult members of family. The kids (6 of them) hollered and bawled. I tripped over the frantically unwrapped toys on Xmas morning damaging my knee and breaking the Thomas train set in the heap on the floor. No sympathy for my knee , just bawling kids and complaing adults because I broke the toys. . The sibling adults argued over the bringing up of children and they hated my cooking anyway. So this last Xmas, guess what? Us two oldies spent a lovely quiet Xmas with like minded other oldies in a quiet area of a foreign land. Bliss.
28/01/11 Xmasexile
3

This does not really sound like a gripe, more like being smug at having grandkids dossing around the place leaving their food wrappings everywhere. Uh? I don't get it!
27/01/11 idontwantkids
-1

I'm an only child to an 'older' mother and I have chosen not to have children. I have no regrets on either score. Life is full of choices and only in hindsight will we ever really know if we have regrets. All we can do is try and make the rights choices at any given time; there is still no guarantee how things turn out! What is right for me will be someone else's nightmare...there are no rules!
26/01/11 Phoenix
-2

Is it compulsory to have kids? No. There are that many now in abusing families, running wild etc... Humans don't know how to parent children yet, that's why the place is screwed up. if I had kids, I wouldn't let them near my mother anyway, as she is totally negative.
25/01/11 Oggleboggle
-10

Not everyone chooses to leave it so late. I for one (aged 34) feel like it's getting late for me to have children, yet all I've ever wanted is a family. I still hope to have one when I meet the right person as long as I am still able. Have you actually thought that not everyone makes a choice? Think of it this way instead of griping, you were LUCKY to be able to have yours when you did.
25/01/11 talodi
7

It's nice that your parents are alive and well and sharing Christmas with your children and other family members but not everyone's life is so perfect. People die at different ages and stages of their lives. Life could end for a single parent with young children, or life could end when we are a grand parent - not everyone gets to choose. You and your children have been lucky.

Your friend had her reasons for when she started her family as did you. Again you were lucky to find your partner earlier in your life and you have enjoyed a long and hopefully happy relationship.

Everyone's life is different and we all make different choices along the way. Some good, some bad, some different, but they are our choices to make and they are what makes us the people we are today.
25/01/11 Al
-19

There is no cost. Your friend is an individual and she made choices that suited her. Yes, you might have a 'heaving' household, as you put it, but not everyone wants that. Children grow up, leave home, relationships between grandchildren and grandparents inevitably 'cools down' - after all, the primary relationship is with their parents. I often laugh to myself when I see cars with stickers inside saying things like 'Grandchildren on board' or 'Grandparent driving'. To my mind, it is a bit pathetic really. Not content with devoting their lives to the upbringing of their own children, and all the time, effort and energy - and financial cost! - of that, but then they seek to repeat it all with grandchildren, more or less becoming unpaid carers. Your friend has probably got much more time to develop meaningful friendships that do not revolve around discussing children, and their first steps, and how they do at school, etc etc (it can be so boring!). She probably has the time and money to travel more, and see more of the world, and reflect a little more on her mortality, rather than fostering the illusion of immortality through one's offspring. Furthermore, she probably has a more 'intense' (for want of a better word) relationship with her one daughter. Don't get me wrong Bagpuss, I'm not decrying your 'heaving household', rather just trying to put another perspective onto it. I hope your friend doesn't see this gripe because she would probably find it quite hurtful. So, there is no cost to leaving motherhood too late, no price to pay, rather it is just another way of being a mother. Grandchildren are over-rated and I think it is time that parents handed them back a bit more often, and used their remaining years to live a more worthwhile existence.
24/01/11 miserablemoaninggit
-7

on cost of forcing motherhood too early is becoming a single parent mother trapped on benifits. And stuck in an endless cycle of hatred, saying to yourself - if only I held out till I met someone and saved some money.
24/01/11 B1n
-1

Resident parents and their 'poor me' attitude

No child support from wealthy family

Absent father: 'I think about her everyday'