I am fed up with Sky.  They're very quick to tie customers into agreements and get their money by direct debit but they fail miserably on delivering what THEY promise.  I tried to take advantage of their 'Introduce a friend to Sky TV' offer.  I signed up for their service.  I registered and jumped through hoops at their request in order to get the M&S vouchers they promised, or should we say 'dangled'.  Not only do you have to sign up, you then have to call up Sky to register to receive the vouchers.

I called them up on 30th March, 26, April, 7th June 29th June, 5th July, 13th July and 19th July.  Each time I called I was assured the Sky magazine and M&S vouchers would be in the post.  To date I have not received the Sky magazine.

I have not received the £30 of vouchers, nor has the friend that introduced me.  Now the story they're feeding people is that they've run out' of vouchers.  Yet, Sky continues to advertise the 'introduce a friend' scheme on its channels.  Does that not constitute false advertising?  Aren't there agencies out there who protect the consumer against this kind of crap? 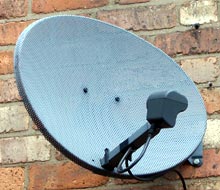 I have probably wasted more than £30 on phone calls to their 0870 numbers.  I have wasted time listening through their elongated menu systems and confirming phone, name, address etc to each representative I have spoken to.  I have had enough of their excuses.  I have never had such poor service from a company before... well close, but not this bad.  They just really don't care about their customers.  If someone wanted my advice about signing with Sky through the introduce a friend offer, my advice is don't!

Their scheduling leaves a lot to be desired.  They rerun programmes to such an extent that there's hardly ever anything new to watch unless you pay for their overpriced movie and sport channels.  And they insist on using technology for hard of hearing customers without offering hearing customers an option to remove the signers who sometimes take up up to 50% of the screen.  Nothing against disabled people, but I am paying for the Sky service for my own benefit!

I've recently signed up with sky and got £100 M&S voucher, but the problem is what do you spend it on? All they've got is overpriced pseudo middle class stuff - a waste of money if you ask me.
10/07/13 Nick
-14

iF YOU REALLY WANT TO GET BACK AT SOMEONE FOR SOMETHING THEY DID TO YOU THEN INTRODUCE THEM TO SKY. AFTER THE GRATEFUL THANKS DIRECTED TO YOU, THEY WILL GO THROUGH HELL ORCHESTRATED BY THE AUTISTIC GORILLAS IN THE CALL CENTRES. MEANWHILE, YOU CAN RELAX, HAVE A BEER AND SIT BACK AND ENJOY THE SPORT. YOU MIGHT GET SOME FREE VOUCHERS FROM SKY FOR YOUR TROUBLE. WARNING: SHRED THEM OTHERWISE YOU MIGHT END UP PAYING FOR THEM. YOU'VE BEEN WARNED
15/09/12 Arthurb
-14

You are all sad people, I have never heard so much rubbish in my life, it's something that always amuses me, people getting all upset over vouchers, I have one thing to say to all you people, and that is to get a life! They are only vouchers, I think it's very immature of people getting all upset over this and winding yourself up over it just makes me feel sorry for you.
29/01/12 Anonymous
-11

@ brown eyes, it looks like the order wasnt put through properly. if u have any proof (conformation emails) of the order and it states the introduce a friend went through, send copies via the complaints section @ sky.com and the remainder of the vouchers should be sent to u
04/11/11 bunny
-9

Well looks like SKY are still the same. Recently placed an order with them using the introduce a friend so myself & my daughter could receive £75 M&S vouchers. The first Direct debit has hit my bank account and guess what SKY have sent £25 Voucher to us and say the order was not through introduce a friend and the IFO reference i quoted is invalid! How can they keep getting away with this ?????
23/10/11 brown-eyes
-6

I have had exactly the same thing. My son wanted to buy a TV and satellite in September 2010. Sky asked if his mother had an account so that he could take advantage of the introduce a friend offer. The offer was £50 of M&S offer for me and the same for him. The Sky person said that these would come in handy for Christmas...what she failed to tell us was she meant the following year. After a lot of badgering and phone calls I finally got my vouchers two weeks ago 8 months later. My son still has not got his. We have both complained to the Advertising Standards Authority....still waiting.
02/04/11 dianalinden
-28

Same here. no vouchers, probably someone in the office nicking them instead of posting them, and feeding us a load of lies. Look for someone who eats lots of 'Dine in for £10' and a bottle of wine every night....

I just want to comment that the service from sky is absolutely dreadful! They do not care about any of the subscribers, they only want your money and they will con you to get the most out of you. That is all I want to say.
01/09/10 squirrel
-5

I have a similar story. I registered my father as a new friend via the Sky website - tempted of course by the £50 M&S vouchers, which of course coincided with my fathers decision to change from a previous provider to Sky. I sent the email to him, which he then received, contacted Sky and in no time at all he was up and running as a Sky customer. He received his £25 M&S vouchers, but low and behold, I received nothing. I contact Sky and was told my father "did something wrong on his application" which means the offer is now invalid and I won't be receiving any vouchers!!! What??? All the emails to my father from Sky state that I as his friend has recommended him etc etc. His application couldn't have been that wrong! They took his money quick enough! I have sent a letter of complaint to Sky and currently await their reply.
29/08/10 Andrea
-18

my name is mrs helen gibson
my address is 41/5 easter drylaw place edinburgh eh4 2qj my account number is 630047155704 my complaint is this I was interduce 2 you by afriend mr chris rsnkin ? address is 2 north buteland bank edinburgh eh12 8xj they recieved there mark& spencers voucher s in january of this year? my sky was put in last december I have lost count of how many time I have phoned sky ? and they told me they where in the post ? then sky told me I was not geting them as I went 3 rd party ? so I phonmed the people who conectied my sky in ? and iwas told as I lived in a stair and 3 high you dont do that and this company goes through sky? iwhen I told them about me not geting my vouchers ? they told me I should and when they checked there records ? they could tell my friends name and address ? so I did not go 3 rd party
/also my friend phoned sky 2day 28th 8 10 at 2pm not quite sure of the time ? schris spoke 2 a girl called caroline ? she told my friend 2 let me know I should have recieved my vouchers and 2 date still not got them ? my complaint is this if I went 3rd party why would my friends get there vouchers and not me if I was not recomended by my friends I am not happy about this I would be gratefull if you can get 2 the bottom of this and get back 2 me thank you mrs helen gibson
28/08/10 helen
-15

If you introduce someone to Sky you are obviously not their friend,but if they are theyare yours they wont be for long.Be aware Sky is not run for you to see TV,they, like any other business are in it for the money.The biggest problem will arise when you try to leave,that friendly chap you are speaking to will try to make you stay,or at least make it hard for you to leave,I myself have tried to leave twice,but they keep on saying that I have reinstated it,Consumer Direct on 0845 40 40 506, thoughwill help you and even advise what other steps to take.
15/06/10 arrawn
-14

What a complete waste of time and money, I came home from work very tired and decided to phone Sky customer service to query my bills as they have become rediculously high since January. A very incompetent advisor came on the phone and at every question put me on hold. After much frustration I asked to speak to his manager, a few minutes later the manager came on the line and I thought finally I would be speaking to someone with experience, no chance, she could not answer my questions or queries as to why my bills was so excessive, after being put on hold again by the manager my patience wore thin, with no resolution in sight and after 40 minutes I hanged up. I will be cancelling my subscription tomorrow. I am not paying my money to be treated in this manner. Very poor service
20/05/10 Tez
-26

I have had exactly the same problem! I have rung them twice, after sitting on hold for about 20 mins (total) I was told by the first guy that I would recieve vouchers but would investigate and ring me back...never bothered to, and the second guy that I would get vouchers but should ring back next week. I rang back, and was told to email them instead. I have now been told that I was apparently never supposed to recieve vouchers and that I was given a free hd+ box instead. which I never asked for! I told them I didnt want it, and that I was told I was recieveing vouchers and that their customer service was poor as the other two guys obviously didnt bother to look in my account, but have been told that I have a hd+ box and that is basically the end of the matter. absolutly disgraceful. I am determind to get my vouchers now, and have written to BBC watchdog, will be contacting some newspapers shortly and will be writing to trading standards authority. ill teach them to mess with me.
01/05/10 louise
-20

Just been on to Sky and they claim that they did not receive any details of my referal of a friend. This is not the first time it's happened either. Am I going to do this again..No.
27/04/10 Raj
-4