Is January the month of Misery?  My gripe is basically all miserable aggressive people who don't seem to respond to manners.  In less than a week I have had to deal with two pompous middle-class idiots who think they can win a argument by being ignorant or down right horrible.

On the first occasion My wife and I accidentally parked in someone's else's space in Sainsbury's.  We honestly didn't realise that we had but were happy to reverse out once we were aware.  We were made aware by a complete fool of a man who stormed out of his Ford Galaxy people carrier (complete with 2 children) and started telling us that we had parked in his space and that we should move straight away.  I explained that we didn't realise we had taken his space and would reverse out, with that he told me I was sarcastic and should have realised that he wanted the space.  He was starting to upset my wife so I told him to shut up, go back to his car so we could move.  He then decided to take the alpha male stance and broadened his chest in a gorilla like motion.  After facing me off he decided to get in his stress wagon and take the place.  I think what really added insult to injury was that the car space was a family one and whilst we had a 3 month old baby in the car, he had 2 able bodied children over 10 years old!

The next experience was coming home this evening and seeing a male car passenger hurl abuse at a single female driver and wave his fists at her because she had blocked his way for a minute at a junction. 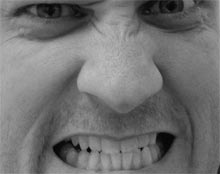 The latest encounter was again this evening (which led to this posting) when I arrived home.  I discovered that a Volvo driver had parked across my gates therefore blocking access.  I looked at the driver for a few moments and he responded by waving his hands about at me.  I went indoors to say hello to my wife and baby and then decided to go out again to talk to Mr. Volvo.  When I approached his car he lowered his window and spoke to me like a piece of dirt, telling me that I was in the wrong for apparently not realising that he was just waiting to pick someone up and I should go away.

I asked him why he was being so aggressive and talking to me in this manner?  He responded that I was in the wrong and he would be gone soon.  Again talking in a stressed up rude manner.  I decided to leave thinking this incident was too close to home and why should I lower myself to his level.

What really gets me is that these people were not your standard chav or yob.  In fact they were middle class types but they obviously could not conduct a conversation without getting heated and angry.  What is it about people and cars and why do people turn into nasty rude thugs?  Is it that they are so stressed up or unhappy; or do they think that the only way to deal with people is to lose all social skills and resort to being horrible?

I'm not a wallflower at fifteen stone and 6ft tall but I'm not going to resort to threatening behaviour to win an argument.  Also is it really big and tough for men to wave their fists at lone female drivers?  Are we just becoming too stressed out as a nation and losing that Great British attribute, namely good manners?

'Why are there so many bad people about?'

Simple, there are no police anymore. The only remaining plods are in cars looking for reasons to fine motorists, and to be fair, this policy has been layed down by chief constables trying to balance the books after Tory cuts.
27/09/19 Jethro
8

I disagree - I think we are mostly kindly and intelligent - I can't believe how un-informed some of the views are on this gripe. Your country of birth details are perfectly your business, but so are ours. The workers here are not lazy and as for dishonest I could wear the keyboard out disputing this and collect peoples details to support this etc...what a load of rubbish, no you don't know us as you think you do!! It's all done with our permission and is perfectly friendly. Plus these people are working a lot of overtime for less than fantastic remuneration. Hope you never need help and can't get it because other people have your views...it's a very lonely world we live in if we can't help and comfort one another.
24/08/14 collar
1

British people are arrogant. Majority of them. FACT. Don't let their miserable attitude rub off on you.
24/08/14 shan
0

Can anybody inform us of the levels of immigration in the Newark area prior to the by-election. If reports are to be believed, the Tories are set to win with an overwhelming majority. This may indicate that immigration is not a problem among the resident voters, or immigration is at a low level in that area at the time being.
04/06/14 Anon
0

As an Englishman living in England, I can only comment on the anger that I witness here. It's a society that is now being forced to face reality, population overcrowding, loss of Government benefits, lack of employment.. you name it. The English are, and will always remain an aloft people, I think it has a lot to do with " Island mentality". Problems within society are not helped when overcrowding happens. They tell us that as time passes the young will accept change more readily. What in fact is happening, is the young are rebelling to a greater extent than the older generation, that, I believe is now being proved by the support for the UKIP party and the far right movements in Europe. These are not going to be happy times ahead.
04/06/14 Jethro
2

Its strange how many posters on this site pick on a group of individuals in society for its ills?

Take those on benefits, I see lots of comments against this group but why? - BTW I'm not on any benefits.

We are missing something key here, the problem is people not rich, poor, young or elderly.

People are the problem and we each have different behaviours which under certain circumstances come out as a nasty streak.

If you're aggressive at 15 then the chances are you will not mellow as you age despite convincing others you have.
Therefore I propose everyone who displays bad behaviour should be put down at birth.

Oppps sorry the World will be empty within a few years.

If the comments made here on this site is an indication of the way people are regressing in their mentality and attitude towards one another, then God help society in the next few years. It's been said before, "If you put too many rat's in a barrel, you'll see the fighting start"
17/03/14 Jethro
0

I think you will find that the vast majority of benefit claimants are working, David Cameron claimed child benefit but I'm not sure if selling your country out to Brussels constitutes work, I'd call it treachery myself.
02/02/14 Tired and emotional
0

If this site is only a small indicator of the U K's general feel well factor, you guy's are heading for an almighty bust-up sooner or later. Just goes to show that some people are very iffy when their benefits are taken away. But you've all got to agree, the benefit culture could not last and needed reforming. The future for some people will be decided by the Darwinian theory " Adapt or die" because benefit Britain is fast coming to an end.
02/02/14 Anon
-3

In connection to the no so nice man parking over your drive I'm pretty sure you were in the quite in the right to quote the Highway Code and thats not to block or park in front of a drive, gate, garage or and entrances.

I think the problem lies with that we are a small country and over populated, less space means less patience.

The worst thing about these two incidents is that both parties were assuming that they were right. The so called injured party is trying to gain some moral superiority. I suspect that he dived into the parking space in a race with the other car. Did not take the trouble to find out the full circumstances in either situation and did nothing to understand the other persons viewpoint or offer an alternative. Self righteous people are the pits. His big mistake in the first case was to give up the space. He may have been fearful in which case he will always have trouble with other people.
10/01/14 Chin
-2

Boblet, For some time now I have wondered the effectiveness of this sites admin, and at times have been suspicious of their very existence. This site was once a place where people could exchange views, where ideas were expressed, and a difference was made, not so anymore. I believe people in the UK are hurting and turning on themselves and their on kind. The division in this country is growing wider every day, at the moment we are a nation divided.
27/10/13 Jethro
2

I am not sure how best to react to your last post J. The Spell casters & trolls are part of what I dislike also, but what I have come to expect. This is a "wheat from the chaff" site for the strong of mind. It is also a grow bag for the trolls & spell-casters with their seeds of discontent. With admin a willing assistant in their insidious methods of milking the minds, souls & pockets, of the weak & lost.
27/10/13 boblet
1

Well, I think most of the long time regulars that once use to gripe or debate here will agree, that the steady decline in sensible postings indicate this site is all but finished if this trend continues. Too many bitter people that only want to start a verbal punch up and cause grief with their troubled personalities. One can only assume that the decline in the living standards, loss of personal finances, benefits reductions and pressures within society are causing these symptoms to increase. It just goes to show how vulnerable some people are when a crisis arises in life.
27/10/13 Jethro
3

I am deaf but not stupid and I can lip read

To gripe or not to gripe, that's the question?