#Covidiots - it's a very appropriate name for them.  The people who right now are going to undo all the hard work over the last few months and sacrifices made by practically everyone, and sadly in some cases the ultimate sacrifice.

France, Spain and Italy are right now seeing a sharp increase in the number of Covid19 cases and we are only beginning to see that tide turn ourselves.  Make no mistake, it's coming and all the evidence points towards a particular section of society driving these new infections.  These people are typically in the 17-30 age range. 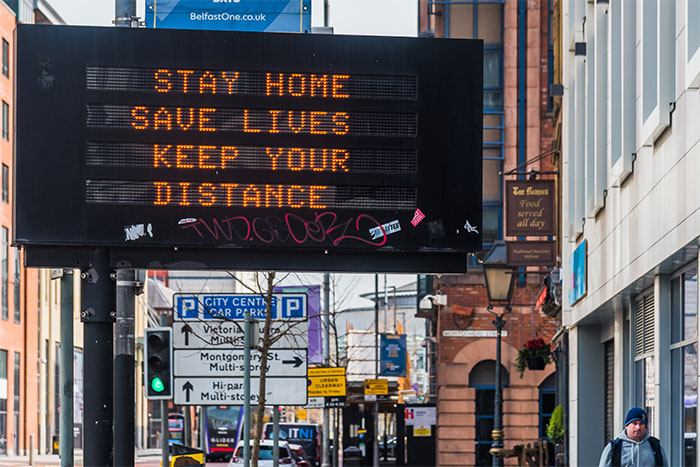 Of course few of these people experience much more than mild symptoms and some inconvenience, but their freedom to do what they like is far more important than the health of others around them.  Right now the number of cases are starting to climb but the number of deaths are low, at least for now, although I would say that this is also starting to change as older more vulnerable people are gradually being exposed to the virus again.

The attitudes of some people really annoys me.  For example the whole thing where masks are required on public transport.  Wearing a mask is inconvenient and nobody wants to do it, but it's only a temporary measure and for it to work properly we all have to follow the rules.

On the bus home on Friday most people on the lower deck were observing the rules and wearing face coverings with just one exception, so that's OK.  But then a large number of people got on the bus and went straight upstairs (no masks).  Further down the road at various stops groups of teenagers all got on board and none of them had any intention of wearing face coverings and to make matters worse they're shouting across the aisle to each other.  Naturally I got a load of abuse when I challenged them and mobile phones out so they could record it.

They just don't get it, because there's going to be more lockdowns and more restrictions.  It's just stupid and irresponsible behaviour.

This Epidemic has, and is building anti-social behaviour. Pressures are showing in peoples life styles. Mental illness has surfaced in greater numbers over the past year. This Pandemic/Epidemic has disrupted routines and, more importantly, Finances. People are having to question their living standards. Too many families have for too long relied on credit which is now coming to an end. In short, Champagne taste but beer money.
25/09/20 Jethro
3

Sunak to extend business support loans as Covid-19 spread worsens, Plus the Â£500 to stay home, plus the benefit hand outs.

Keep giving away all that money Sunak, it will make the case much easier for horror tax raises later. Glad I'm not a wealthy rich person, they will be the ones crying and tearing their hair out when they get the bill. And as for the rest of us little bods!!!!!!
21/09/20 Jethro
0

OK Mr C. Every time you open your mouth something bad happens, so pipe down over there because you're not that important any more.

Another one that should learn to shut up. If they'd got it right to begin with and hadn't been so concerned with getting into bed with the Chinese things probably wouldn't be as bad.
17/09/20 Fed Up
3

I saw why there will be a #northeastlockdown when I visited Newcastle last month. Most people under 40 there don't give a crap - so this is what you get, and of course the same bunch will bend the rules as usual. Good luck with that.
17/09/20 Fed Up
1

Now watch as the major drug companies rub their hands together, startup the pill machines, full steam ahead.
16/09/20 Jethro
3

Now watch the increase in police officers being attacked and hurt if they try to inpose this rule. Some anti Covid restrictions people in the UK will not comply.
13/09/20 Jethro
2

PS to my last post.
I believe it is the airlines that are telling the UK Government which countries to list, so the airlines can fleece people trying to return before the deadline. Notice the unbelieveable costs they charge for a booking to return to the UK quickly.
09/09/20 Jethro
0

Really! And just who is going to make them. Words, words, and more government useless words. All these Government shinny asses know there's no way to stop Covid, so their policy is, "just make it up as you go along".
09/09/20 Jethro
0

Oh how I hate that word! I'm absolutely amazed at how many people, including the goverment it seems, have forgotten the purpose of lockdown. It was to smooth out the peak of infections so that the NHS didn't get overwhelmed, NOT to stop infections at all.

Apart from the elderly and chronically sick the general population doesn't need to be protected. Almost 4 in 5 of patients who have tested positive have had no symptoms, many of the others have only been slightly ill, and that includes vulnerable groups. Also, of course, the more people tested the more cases will be found, but the number of cases now is still far less that at the peak in April.

Until we have a reliable vaccine the only protection we have against this illness is herd immunity, which is never going to be reached if we all avoid catching it! For once the "snowflake generation" are doing the right thing, even if they're not aware of it. Every young person who catches it now is one less to pass it on to their grandparents at Christmas.

We cannot avoid Covid 19 forever, inevitably most of us will catch it, it's just a question of when. We cannot lockdown forever, the economy is on it's knees as it is.
09/09/20 grumpyoldwoman
-2

I agree. Sadly, and I'd wish Covid-19 on no one, but until a high-profile "social media influencer" gets the virus and reacts badly, young people will take little notice.
08/09/20 Timelady
-2