ti-social behaviour from other passengers on our trains.

Recently, due to the relocation of my employers, I have gone from having the luxury of walking to and from work, enjoying the exercise and fresh air, to having to commute daily on the train, oh joy!  However, I am fortunate enough not to be one of the unlucky commuters who have to endure being crammed into the carriages like Sardines and I more or less manage to get a seat on each of my journeys, the over crowded, over priced commuter trains, even though it's a big issue, is not, at present, my gripe.

My Gripe are other passengers and just how selfish and rude some people can be, my first gripe are the ones who feel they have to make themselves at home by unceremoniously placing their mucky feet up onto the seats.  Not only is this rude but seats are for bums not feet and there is nothing worse than arriving to and from work to find that your clothes are filthy or ruined from picking up by the dirty residue left over from the ignoramuses feet. 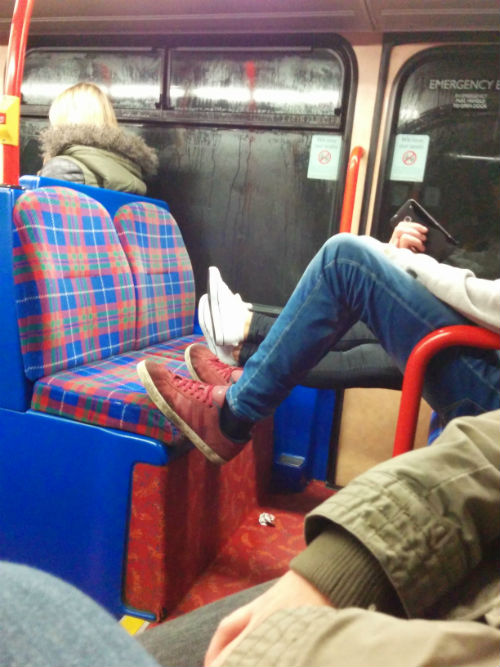 My second gripe are the passengers who feel as though it's necessary to spread out whether it will be their laptops, briefcases or other working parafanalia, or the shopaholics that think that the new pair of shoes they have just bought are more entitled to the seat than the person who has paid for a ticket.  You politely ask the passenger to move (although quite frankly you shouldn't have to) and you get looked at as if you just sprouted a second head and then proceed to huff and puff in annoyance at having to make room?  In some cases an altercation may occur by the ignoramus shrugging ones shoulders and saying where can I put my belongings, which, a, isn't my problem and b, Isn't that what overhead holds are for?  To add salt to the wounds these perpetrators tend to sit on the seats nearest the aisles leaving the window seat empty leaving room for them to spread out and unable for other passengers to use the empty seat, after all on a busy train you should not have to ask to use any empty Seats.

My next gripe refers to the old saying "Age Before Beauty", as my mum used to say to my sister and me as we were ordered to stand up on any form public transport for anyone who was older than us, which at that age wasn't difficult.  These days all you get is young kids or families with their feet on the seats clogging up the seats with there luggage and no respect for anyone else.  Even now as someone who has just had a big birthday I will still stand up for someone who needs the seat more than me, when in reality the younger members of our society should be beating me to it.

Finally, and please don't get me started on the passengers who are unable to make it from A to B without a cheap can of some form of alcohol in their hands, and hideously drunk, need I say more on these undesirables.

Hi You, yes I have seen it and I'm afraid to say a little too local for my liking the event occurred on the Clitheroe to Manchester train. I'm not saying that it was right what the old man did but I can fully understand what drove him to do what he did. Kids these days lack the discipline and know the can basically get away with anything without the appropriate repercussions.
30/07/16 LancashireLass
0

I just avoid the riffraff by purchasing a first class ticket.
26/06/16 MikeP
1

I travel a lot by train with work. I always reserve a seat, only to find someone sat in it. When I explain I've reserved a seat I either get the huffing and puffing or a sarcastic response. Well if they didn't ignore the reserved sign then there'd be no problem. #trainetiquette
04/04/16 Andy
6

I was once on South West line out of London when the conductor/ticket inspector detained the train for 45 minutes at a station blocking the line whilst the police were called to fetch and arrest a passenger who had not paid his fare. Everybody on the train was late for work that morning, including me. I do hope the sum total of late running reimbursements which train companies have and had to make in this instance greatly exceeded the cost of this passenger's missing fare.
26/03/16 Out of Pocket
1

+ the seemingly self-entitled ignorant young mothers with oversized pushchairs, who feel they have more right to the disabled space on a bus which is actually specifically there for use by wheelchair users.
25/03/16 Disillusioned.
2

I too am the sufferer of a long commute. I mostly manage to get a seat but agree wholesale with your gripes. A few extra gripes I would add to this include (in no particular order):

1. Parents who can't seem to control squealing and screaming children on a peak-time service when many people are trying to get a bit of extra work done or need to take advantage of a nap, having got up for the train at 4-5am (quite typical on London-destination services). When me and my siblings were kids, we were taught to behave properly on public transport. Sure, kids want to giggle and talk, but we didn't scream or run up and down the carriage!

2. People who have to have loud and persistent telephone calls to the office, shared with a carriage of some 80 other people. I've been on trains where the annoying caller has been (loudly) droning on for the entire 1.5 hrs. To the offenders: nobody else should be subjected to your office, people! Talk QUIETLY.

3. People who blatantly ignore the 'quiet coach' rules displayed prominently both at the entrance of said carriages, and on every window. No mobile phones, no noisy audio equipment (don't even get me started on THAT one) and no blipping games (earphones are seriously not that expensive). Worse, the ticket inspectors don't seem to regulate this. There is only ever one quiet coach in a train of 12 coaches, so it's not as though they have been forced to use a quiet coach.

4. Disgusting people - including people who leave half-finished food all over the table and seats when there are litter bins provided both in and out of each carriage, and people who have some very nasty toilet habits. Dread to think what their bathrooms must be like at home. Ugh! The turnaround time for a train service is not long enough for staff to be able to clean the train properly, so the evening commute in particular is not very nice.

5. Elbows and legs. Sorry, but this always seems to be guys. I've lost count of the times when men have had to spread out their legs far out of their seat zone (why? Is this some kind of medical problem?) or elbows that encroach over the dividing arm rest of the seat. It's obnoxious behaviour - especially for anyone who doesn't like being forcibly pressed up against some strange man for a stifling 1.5 hours.

6. Garlic. I know - it's nice in a meal - but try to be a little light on it the night before you're going to fill a hot carriage with overpowering garlic breath.

7. Finally, the price. My commute is almost £100 DAILY for a 70-mile journey. It would be cheaper for me to take a flight to somewhere in Europe. How did commuting suddenly become THIS expensive?! Eight years back, it was just £45 but successive money-grabbing private enterprises have shoved the price up higher and higher while slowly decimating what was once a decent service. Even the money-saving season ticket is close to £8,000 a year. I've now reached the point where I've been priced out of my job and resigned this week. I just can't afford to work in London any longer.
25/03/16 IdRatherWalk
4

Loutish behavior seems to be the norm nowadays; I think it all stems from a complete lack of discipline from a young age, have a tantrum you get what you want, I can do what I want whenever I want.

This behavior carries on into adulthood;drop your litter anywhere, sprawl on seats etc.

Modern teaching methods don't help, "Jimmy must be allowed to express himself"

The whole country is turning into a pack of wild animals, dog eat dog, survival of the fittest.

I would have blamed it on population pressures but the Japanese seem to cope without this **** you attitude that many people seem to have in the UK.
25/03/16 Peasant
2