My boyfriend and I have known each other for over ten years. We grew up together and went to the same high school and we were also neighbours for years.  For nearly seven years I was in a relationship with my high school sweetheart (not him), but I started to get those feelings for him after becoming best friends with his sister.

We would hang out together and he just became interesting to me.  My boyfriend at the time cheated on me so we the relationship and I started seeing more of my current boyfriend.  The result was I fell for him even more.

To cut a long story short five years later we finally started "dating" properly after several episodes of drama in our lives, both by ourselves and with each other.  He has a hard time warming up to (read as trustingâ€¦) me because his ex-girlfriend cheated on him and got pregnant by his best friend.  I wasn't out to hurt him, nor get hurt myself.  I just wanted to offer him the love that I know I can give faithfully and unconditionally.

So we started dating in December of 2006 and ended up together as a couple in May this year.  It took for me to bail him out of jail and use my "people" to get him out of trouble for him to realize that he loves me.  I know he realized it before hand, but he hadnâ€™t told me up until this point. 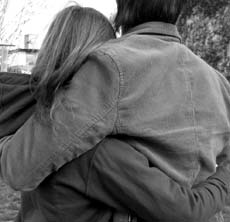 I guess my gripe is this: I got him out of trouble and for that I feel like he feels he owes me in some way.  I just want his love and admiration. He has since moved in with me.  We have been living together for the past 3 months and I just don't see him the same way.  I know that I love him but I feel that he is going to depend on me all of the time to fight his wars.  He is a good guy, he works and pays his bills and isn't a trouble maker at all.

It's his friends that I could care less for.  He is now 27 years old and he has all of these 21-23 year old kids looking up to him, but these kids are in the wrong world if you catch my drift.  I just don't know what to expect or how I should bring up what I feel about our whole situation to him without sounding like I am a crazy psycho girlfriend who hates his friends.

I don't want to choose his friends because I don't want him choosing mine.  I just want us to have a healthy relationship.  Any suggestions on how to bring up how I feel about our whole situation?

By: Looking for a way inâ€¦

Leigh! Read your comment! Your an idiot! Dump the other idiot or better still stay with him and carry on acting desperate to massage his ego
29/04/11 Tinks
-6

I love my boyfriend very much and have since the day that I met him, And I thought that he felt the same untill about a week ago...I went to meet him after he had finished work as he was running late and we were supposed to be going to see my baby cousin, anyway he comes up and says 'oh you know thursday?...Well im going to a party and I probably wont be coming home', so obviously I was quite upset that it hadn't came to mind for him to ask if he could bring me along...so I decided to ask him about it so that my mind could be put to ease about it, but he just made everything worse by saying that the girls who always try to get with him and probably sleep with him when hes drunk are going to be there, and he also said that we should have a few days apart as he is going to be so hung over from the party that we will 'drive eachother mad', but he still keeps telling me he loves me...does anyone have a suggestion????...
13/04/09 Leigh
-7

kodkod84 - Jeremy Kyle show? Too busy for stuff like that. Why not give a helpful comment instead of being mean?
31/12/08 TomW
2

Dear You,
In resolving a problem of this sort it is quite normal and acceptable to voice your feelings and then wait to see what happens. Saying how you feel about something important to you, is a part of everyday, normal relations, between two people. However, do not point fingers or make any demands whatsoever. It may take a day or two for him to respond, but if he is smart and for you, then after a while he may make adjustments and eventually come round to your way of thinking. Perhaps he has an older sibling you might visit together, enabling you to comment how nice it is to be around such a mature thinker? Remain non committal, though, if he responds with a quip!
18/11/08 jay
2

kodkod.84 Are you on the dole or something? Morning TV indeed. Some people work for a living and have genuine issues they would like to discuss without being referred to dole TV!
08/10/07 Boyfriend
3

It sounds like he is very immature to still be hanging around with 21 and 23 year olds- either that or he feels the need to be looked up to. Maybe it makes him feel better about himself. As for all this my "people" stuff WTF?? Have to agree that if the relationship is going to work you need to let him have his stupid friends or risk losing him. Any guy worth his salt will see what a cracking girl you are and GROW UP!
27/09/07 Sarah
-10

Get rid of him NOW,and don't feel sorry for him. If he's been in jail, he's a BIG time looser, and he'll take you down with him.

There's plenty of decent hard working guys out there, only too pleased to give a girl a good time. Don't fall into a trap, and think your responsable for this LOOSER. Ask yourself, WHY was he in jail,does he have a job,does he take drugs,is he abusive to his parents and/or friends.If the answer is YES, GET RID NOW, and save yourself a big heartache later.
26/09/07 Del
6

Let him have his friends and you have yours. In the long-term this will be better for the relationship. Partners who allow themselves to become too dependent upon each other to the detriment of maintaining relationships with friends will suffer in the long-term.

Probably best to try moving to a different part of London, then France if that don't work out.
25/09/07 Herman
5

It is only the Japaneese who have "You save someones life, you are then responsible for them"
He owes you nothing except some gratitude, if indeed you turned his life round.
25/09/07 Homer
-7

This ain't no agony aunt chat room, this is a gripe site so give GMTV's Denise Robertson a call. If you are going to use this site, stop be selective about missing bits out like he's obviously more of a bad boy than you're letting on or choosing to ignore .
25/09/07 Tracey
-6

Taken advantage of by friends and relatives