Some cars or more appropriately the driver, have absolutely no respect for cyclists on the road.  Do they think we belong only on cycle lanes and shouldnt be on the road?  Sometimes we have no choice but to cycle on a public road.  Cars and cyclists are both bound by the rules of the Highway Code however and both should obey these safety rules regardless of the type of vehicle.

For example, I nearly got knocked of my bike by MX05 XTW - a red 4 wheel drive.  I was cycling up a hill near Menlove Gardens West in Childwall, Liverpool.  Its quite a narrow road with cars parked on the left hand side.

This car turned left onto the hill and drove down the hill towards me expecting me to stop and pull over.  We both had to stop - but the Highway Code says you should allow vehicles travelling uphill to have right of way.  The driver of this vehicle obviously thinks that they are exempt from these rules of the road.  She and her passenger actually had the nerve to stop, get out of the car and harass me for daring to pedal up their hill. 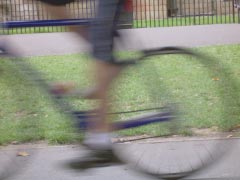 Go and read the Highway Code!

By the time this happened I was too knackered to say anything other than, go and read the bloody Highway Code! Typically, she wasnt listening and insisted I should have pulled over.

To the woman driving MX05 XTW - You are a danger to other road users and youre going to seriously hurt someone one day.  Maybe you should re-sit your driving test or at the very least read that Highway Code as I suggested!

Too many car drivers these days think that they own the road.  I drive more than I cycle but always give cyclists plenty of room.

There are many cyclists who have no respect for motorists and will take every opportunity to get in front of traffic queues and once in front such as at road works hold up the traffic as there isn't much space to pass when these queue barging idiots get in front and then hold everyone up. It wouldn't matter if it were at normal traffic lights and traffic can pass safely but when their queue barging holds the flow of traffic up with minimal space to pass resulting in a motorist attempting to get by and knocks the cyclist off then the cyclist is mostly to blame because of barging in front and holding up the traffic. They should wait their turn and if they were genuinely in front I would expect traffic to wait to pass safely but I have no sympathy for such consequences when they have queue barged and provoked this accident.
07/02/17 MoreRespectForMotorists
0

Ultimately is it the motorist or the cyclist who kills? There are idiots on bikes, there are idiots in cars. What we actually have in both cases is...an idiot. The motoring lobby loves to complain about the errant and reckless cyclist on the pavement whilst ignoring the fact that last year deaths caused by these cyclist/pedestrian events amounted to...no deaths at all. The angelic motorist however managed to `accidentally` kill more than 470 pedestrians.

Lets pick on the cyclist who skips a red light. Deaths caused to others? 0. How many more deaths and severe injury resulted from 1.5 tonne lumps of metal skipping red lights at speed? Plenty.

Cyclists have no insurance. They`re not required to, although many do actually have insurance through various other insurances...unlike the estimated 1 in 12 motorists who are required to have insurance and can`t be bothered to pay it resulting in your premium going up each year.

We can discuss this and throw stats around all day long. Yes, idiots use bikes and they use cars but if the police ever come knocking on your door to ask your identity before stepping in and telling you your husband/wife/son/daughter was involved in a collision 3 hours ago and they regret to inform you that despite the very best efforts of the medical team they were unable to revive them you can pretty much guarantee that the idiot who killed them `accidentally` (as society likes to say) was not a cyclist but was in fact...a motorist.

I`ve been through that with a 5 year old step sister who was hit by a speeding driver back in 1994. Had she been hit by the same idiot on a bicycle instead of in his car she`d have been 23 now. So, before the lazy and the impatient and the downright dangerous motorists of this world wake up and realise their arguments are so utterly selfish and in many cases completely inaccurate (such as the ever boring and non-existing road tax excuse) just look around you at the real issue on the roads...motorists. They kill, they maim, they paralyse, they ruin lives and destroy families...cyclists do not.

Its an argument the motorist can never win until the day comes when society no longer has to grasp at their children on the pavement and warn them about `the cars`.
22/05/12 Fedupwithcarculture
-9

Actually I would say that it is the cyclists who have no respect for the motorist, not the other way around. Cyclists need to give respect to motorists in order to get respect from motorists. Respect is a two way street. Cyclists need to be a bit less self righteous, Look out for your own safety, don't expect other people to do it for you. And never expect every motorist to do the right, or expected thing. Cyclists need to behave correctly and properly when using the highway, and obey the law to the letter and the spirit. The Highway Code is not actually law, it is advice and guidance.
09/03/11 the crash expert
78

Generalist, "If cycling were far more common and motorists were all saints who never speeded; jumped red lights; used the phone & etc., THEN AND ONLY THEN THERE MIGHT BE A CASE for the registration of bicycles."

Why is that ? The behaviour of motorists in no way cancels out the inconsiderate or dangerous behaviour of cyclists.

Generalist, you are keen enough to demand answers from other people.

Could you tell me why you believe cyclists don’t need to obey the law until every motorist does?

In my opinion both should do so. Do you have an opinion, not a wall of statistics and quotations but an opinion of your own?
10/02/11 Murchison
-60

“Generalist There are so many things wrong with your posts that it is hard to know where to start.

“ "If cycling were far more common and motorists were all saints who never speeded; jumped red lights; used the phone & etc., THEN AND ONLY THEN THERE MIGHT BE A CASE for the registration of bicycles."”

Why do you make the assumption that there is no need to regulate the law- breaking behaviour of some cyclists until all motorists also obey traffic laws? That is like saying we need to get all muggers off the streets and then and only then there might be a case for stopping pickpockets.

Motorists should obey the law and so should cyclists.”

I thought that was a reasonable post but you would not answer it. I have re-printed it and put my name to it is as anonymity seemed to be the problem for you. Would you like to answer it now?
10/02/11 Murchison
-47

Generalist,you never seem to have any opinions of your own. Instead you seem to bombard gripers with statistics and quotes,which are sometimes quite pointless and idiotic.
07/02/11 DSG
-57

Where you perhaps Tony B-liar in a previous incarnation?

I know there's a typo in that, I don't need to be told, and I also know it's not coherent becuase B-liar is not dead yet, but I'm sure reasonable people will get my meaning.
07/02/11 MikeP
-9

Do you have any opinions of your own, or do you simply look for quotes and statistics to knock down the opinions that others express?

Do you ever answer, as oppose to ask, questions?

Are you a politician? Where you perhaps Tony B-liar in a previous incarnation?
07/02/11 MikeP
14

Generalist: you can't even write proper english, everyone knows it is;

Boblet, he seems to like statistics, lots of them. It is what he offers instead of an argument or discussion. They must take him hours to find and sift through.

He does the same things that he accuses others of, namely ignoring any points that he does not want to answer. Apparently it is the old "do as I tell you, not as I do".
05/02/11 Fed up pedestrian
11

Generalist has put me in my lowly place again, I just did not realise that I was to answer his questions as well as improve my spelling. I apologise profusely, unfortunately with my questionable intelect it may happen again. You dont like giving the cane do you Generalist?
05/02/11 Boblet
-60

Boblet can't answer reasonable questions so changes the subject and hopes nobody will notice.

Regarding statistics, I have two comments:

1. "There are three kinds of lies; lies, damned lies and statistics."