Every time I go onto the roads of this country I encounter drivers that either do not understand the rules of the road or do not care about them.  There are a few areas in which poor drivers excel.

1. Roundabouts - They get into the left lane to take the last exit meaning those that want to leave earlier have to stop whilst they pass across the front of them.  Others forget about the lanes on a roundabout and take the shortest route meaning from left lane, across straight ahead without following the curve and straight ahead having used both lanes.  This of course has caused others to brake so as not to lose the front end of their car!

2. Junctions - They cannot understand the difference between stop lines and give way lines.  Some drivers think that give way means that they have to wait until they have given way to somebody before pulling out. Others cannot decide when to pull out and wait for a written invitation. 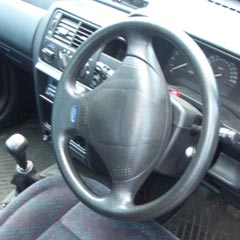 3. Last minute 'nip ins' - We've all seen this.  A queue of traffic and some idiot decides to drive past it and nip in at the front.  Then they have the nerve to abuse you when you don't let them in.  Do they think you were queuing for fun?

4. Centre lane hogs - widely discussed on this site so we already know about these particular idiots.  'Stay to the left except when overtaking'.  It isn't exactly rocket science is it?

I've been driving for many years and I have seen the levels of competence and courtesy plummet on the roads of this country.  It is about time that they introduced an attitude section into the current driving test to weed out those that, although capable, are not suitable to driving.  If this is not possible then maybe those drivers should be given a licence to drive only in Italy where they would be among others of a similar ilk!

Thank goodness for speeding car drivers that get caught and fined. If not for them part of my council community charges to support the police would be much higher. Many thanks speeders.
05/05/20 Guest
0

My sister was telling me this evening that there are individuals out there who stage accidents to claim on the insurance. Basically the car slows down in front of you and you get hit from behind. Not sure of how true or widespread this is. Worrying thought though.
11/02/19 Kenny (site admin)
0

Weâ€™ve all seen the thug drivers and most probably been involved in some sort of altercation with them, but, remember these thugs act this way all the time so sooner than later they meet their match, another thug that wonâ€™t give way. BANG CRASH, KARMA.
10/02/19 Jethro
3

Every day that passes, I seem to witness an ever growing number of angry, agressive, stressed drivers, male and female behind the wheels of German built cars. I can only come to one conclusion, there must be a great many BREXIT remainers in them that have realized they have LOST completely and must now accept defeat at our hands. Roll on the 29th March.
07/02/19 Baby Boomer
4

I can highly recommend travelling any motorway in the UK these days watching the growing numbers of stressed out, angry, humans abusing each other. My owner wonders why I'm at the side window wagging my tail like mad( it's our way of laughing our heads off). If I acted like some of the drivers I see every day they would have me put down. By the way, please use the service stations to cock your legs, the bushes are our territories, Thankyou.
04/01/13 Rover
-2

What do you mean centre lane hogs? If you are behind one then surely you are overtaking something in the left lane? Which means they are too.
04/01/13 Knob
-4

Boblets - I'm sure you're right, I'll not waste any more time, but have you noticed that only those people whose actions are indefensible will actually try to defend themselves in a public place, so now we will see who kicks off first.
15/02/11 Alf Red
4

"Alf Red" It is my personal opinion that you are wasting your gripe on this site, it is populated in the main by the very people you are griping about, you will notice the names when they defend their driving habits after a while
15/02/11 Boblets
2

Many drivers have no idea what is going on around them. I used to travel daily on a very busy motorway and some of the driving appalled me. I would always leave a gap in front of me for vehicles entering the motorway from one of the many sliproads, yet some of those seemed incapable of adjusting their speed to filter in, causing me to have to brake. Many times I would spot blue flashing lights in the distance in my mirrors and get ready to move over, yet some drivers didn't see them until the emergency vehicle was right on their tail. As a former biker, I would always look out for bikers coming from behind and no bike ever passes me without me seeing it first, yet I've seen cars pull out into the paths of bikes. You should always know what's immediately behind you vehicle and whether or not it's maintaining it's distance or gaining on you. One day last week, the traffic was a bit less busy on the 50mph limit section, but if you were awake, it was easy to judge the speeding up and slowing down of traffic and not have to brake, but there was a Merc driver whose brake lights were going constantly. He was in the outside lane and would speed up until he was right behind another vehicle, then slam on the brakes - keeping this up for mile after mile, while everybody else just maintained speed - idiot. I see loads of drivers on their mobile phones, oblivious to all the camers along that road - what is the point? - a bluetooth earpiece costs about £60, about the same as a fine.
15/02/11 Alf Red
23

I was approaching a mini roundabout, indicating right and a large wagon was already coming onto it from my left, so I slowed, let him go past and went round behind him to turn right, only to be nearly hit by a car that was coming from straight ahead and was turning into the road the lorry had come out of. This lady driver had decided she couldn't wait for the wagon to move and cut across behind the wagon, bypassing the roundabout and nearly rammed my car in the side. I just stared at her and shook my head - and she went mental, blasting the horn and giving my the V signs. Idiot.
14/02/11 Alf Red
-3

I think you've missed my point, Anon. People shouldn't be queueing in single file, if a lane is open it is there to be used. If it wasn't it would be closed.

That said, there is no excuse for becoming abusive or trying to force your way in. What I normally do is drive up to the closure, indicate my intention to merge, and then wait for someone to have the common courtesy to let me in. There's always a couple of muppets driving bumper to bumper, pretending they can't see me refusing to make eye contact. But life's to short to get upset by these morons, and I usually don't have to wait too long for someone who knows the rules of the road let's me in.
31/12/10 JohnnyB
-10

JB, it isn't that those people have no right, it's more to do with bare faced cheek to do this and never give a thankyou yet expect it.

People only refuse because like you say, the "sheep" have pulled into the lane without the blockage and waited patiently. Other people storm down the 2nd lane OR lane 3 and do PUSH their way in without actually allowing for a space to open up.

I have it happen all of the time. It annoys me. Despite the HWC stating that you give way to the right, It doesn't clarify that it DOES or doesn't apply to motorway/duel carrageway driving without an island.

Only thing lacking as I say, is indicating and pulling in when able, thanking and being safe. Not barging/bullying after showing no curtiousness or patience.

"3. Last minute 'nip ins' - We've all seen this. A queue of traffic and some idiot decides to drive past it and nip in at the front. Then they have the nerve to abuse you when you don't let them in. Do they think you were queuing for fun?"

It's not rocket science, you use both lanes until you come to the obsruction and then you merge in turn, one after the other. Why do so many drivers find this simple concept so difficult?
30/12/10 JohnnyB
-11

Oh, I speak from experience too.

I went into the back of a Volvo xc90 4x4. No indication, heavy traffic, lorry infront braked because of another turd featured moron, doing the same thing. The traffic infront came to a grinding halt. 4x4 in the way of the braking lights of the lorry, so I couldn't see what was happening. 4x4 Braked hard and I crashed into the back of him.

Car behind me dove into the hard shoulder and the van behind him hit my boot.... car behind was nearly in my boot anyway.

Final report stated that I should have anticipated the Volvo moving into my braking gap and slowed to allow sufficiant braking distance.

I was at fault because some scumbag woman couldn't be bothered to drive properly. She got off without anything at all. Maybe it pays to drive like a lemon.

One thing that has started happening all the time now is the Morons that thunder down the middle lane of the motorway and with 100 meters to go before the slip road has been missed, they dive in and over.

Why when there is room at the 1/2 mile marker do people pull up to cars bunched up at the back of a lorry and then just force their way in at the slip road entrance?