OK, I've come off my Brompton folding bike to look for work (and I wrote to Normal Tebbit, to let him know that).  Now I've found a job that requires me to get off my backside to travel beyond a daily commute to central London on a pretty regular basis.  So, I've had to join the ranks of all you other smelly, gas guzzling motorists and I've bought myself a little 1 litre Pug 107.  Before I decided to venture over to the dark side I, as a former halo donning cyclist, despised drivers with a passion whenever I toodled to Sainsbury and breathed in all that Benzene and Carbon Monoxide from your filthy exhaust pipes to get fit - NOT.

Guess what, I still do...  Despise many motorists, I mean.

If, like me, you are a London resident you know that you don't just get behind the wheel to drive to work, arriving fresh faced and relaxed after a comfortable drive to start the day ahead.  Instead, you brave the battlefields to get to work in the hope that you can arrive in one piece - mentally or physically.  If you can, it is nothing short of a miracle, even if you do start your day in a foul mood assuming you haven't been carted off to A&E instead.  That's because you will have come across some London motorists who seem to leave their road manners at home (assuming they had any in the first place, which I very much doubt in many cases). 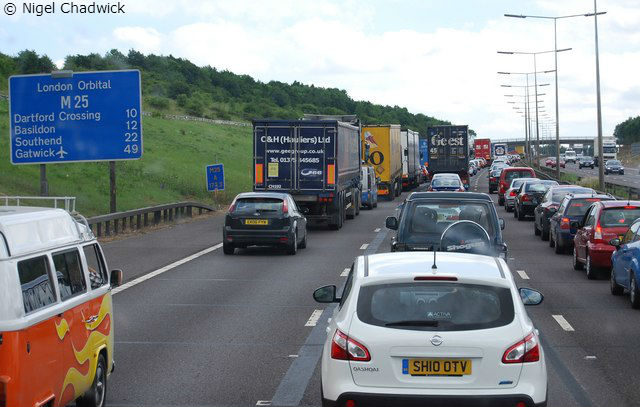 I get heartily sick of motorist morons parking about 2 mm away from my rear bumper at traffic lights (usually on a hill), making me use half a tank of petrol revving up to ensure I don't slip back on a hill start and prang them.

I'm even more sick of roundabout road hogs not remotely acquainted with their indicators, making it impossible for me to know if it's safe to pull out, and when I have discovered that I could have pulled out....  if only that other car had indicated correctly or at all..  it's too late now that I have a menacing flurry of cars and lorries heading my way, which will squash my little Pug flat as a pancake if I chicken game them instead.  So I don't.  That means I am held me up for another five minutes or more, at least.

Then there's the menacing motorway morons.  Those who chicken game onto the slip roads into the left lane instead of realising I have the right of way (according to the Highway code), because I am already on the motorway, and forcing me to slow down whilst they barge their way in front of me at 70 mph - with an inch to spare from my front bumper.

Then there is the selfish motorist who has never, ever, ever in their entire life got into the wrong lane in all the years they've been driving.  Nope, that's right.  I am the only person who has ever done that.  I must be in the Guinness Book of Records for achieving that rare accolade.  Those who never make a mistake think its hilariously funny to edge forward to close of any gaps, after seeing the anguish on my face as I desperate indicate to helpful and considerate drivers in the parallel lane I wish to join in the hope that one will let me squeeze in.  NOPE!  Helpful and considerate London drivers are, I've discovered, as rare as elephant herds in Mayfair.

This is great. I real old fashioned pointless moan about a situation that ain't never gonna get fixed i.e.London traffic.

If you live in London then you agree to put up with stupid unfriendly people, manic traffic, high prices, nowhere affordable to live, high crime, and being ripped off every day.

London isn't going to get any better. So either put up with it or move out.

Where I live in mid Wales we have a number of people who have relocated from the smoke. Usually, the elderly member of the household sells up and moves to the sticks. Then the kids and grandkids use grandma or grandad's new place as a stepping stone to get out of London and try to make a new life for themselves here. Some stay, some don't. It is very quiet compared to London.
04/03/18 Phil
0

Chelmsford is now a no-go area, what with driving cars and what have you. Stick to two-wheels, that is what I always say - But don't forget to wear a hat.
12/02/14 collar
2

One sympathises deeply with the plight of Grumpyxx.

Urban driving is indeed a nightmare. Urban driving however, in a small, smelly little French car must be unimaginably worse.

Congo's ageing but graceful Bristol is a civilised place from which to view the world.

Grumpy xx, while not saying whether you are wrong or right, the recent cyclist deaths in London were not caused by collisions with cars. The other vehicles involved were actually 2 buses, 1 coach, 1 lorry & 1 tipper truck.
17/11/13 grumpyoldwoman
-9

Interesting that in the news just now there is a big debate about what to do about enhancing the safety of cycling around London Streets, following reports of 5 deaths in a short space of time. As a bike rider and car driver now I can say with absolute conviction that car drivers, not lorries are, by far, the worst culprits when it comes to disobeying the rules of the road and showing lack of consideration for other road users whether they are other car drivers, pedestrians or cyclists. This is particularly true is they drive a BMW who comprise about 90 per cent of my problems on the road.
16/11/13 Grumpy xx
0

So if I pull up a metre behind you on a hill, I can routinely expect to see a 1L pug rolling back towards me? Is one metre enough for you?
08/11/13 Annie
3

It's not easy, as a 1 litre PUG owner, arguing with a 3 litre Range Rover or a two ton lorry. Gulp! The only person on wheels, could possibly intimidate on the road is another cyclist.
28/10/13 Grumpy xx
2

Just ignore them, if these other motorists want to behave like idiots, let them, don't let them rile you and draw you into their mind games. If they are too close, move away carefully (and slowly), if they 'beep' wave a cheery hand, Believe me, it REALLY winds them up if they think, you think they have done you a favour.
However, please, please, please do not equate hooting with road rage, the horn on a car is to warn other road users that you are their, so if I hoot, that is why, I think the other driver has not noticed my car.
28/10/13 Jezza C.
3

Haha delightful read! I have felt exactly the same for many years, and I live in a small town in north notts! I've recently started a commute to Chesterfield for work and fear for my life daily, I feel sick by the time I get to work after all the near misses I have from the dangerous drivers described above! I've often said that we're getting like italy or greece - a free for all, only our volume of traffic is much more! Glad to know I'm not the only safe, law abiding motorist - I was beginning to fear I was! Either that or I missed the crash course in how to drive like a moron in rush hour!
28/10/13 Mrs Smith
2