Pedestrian crossings and zebra crossings seem to have lost their meaning as far as drivers are concerned these days.  I have recently been appalled by the lack of attention paid to the highway code by drivers out there.  They do not seem to understand that they have to stop at a pedestrian crossing to allow the people waiting to cross when the lights are red and as far as zebra crossings are concerned, they're just stripy bits of road with people waiting at either side.  Do we have to stand in the middle and wave our arms before cars will stop?

I took a walk to the shops this afternoon and I have to cross two pedestrian crossings to get into town.  Twice it happened to me today, once on the way there, and once on my return journey; some idiot decided he couldn't be bothered stopping at the lights on red and decided just to race through the crossing, oblivious of the fact that I had already stepped into the road.

Many times I have seen drivers, mainly taxi cabs as it happens but that's another gripe, thunder passed through a zebra crossing without looking to see if someone's waiting to cross.  In fact last night I saw this happen and the driver swerved around the person in the road because they just couldn't be bothered to slow down or come to a stop. 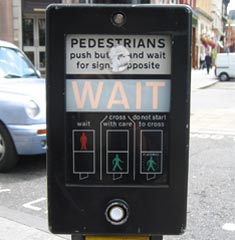 Has common sense just gone out the window...

What makes things even more dangerous are those inconsiderate people who park their cars on either side of a crossing making it very difficult for drivers to see people waiting.  Has common sense just gone out the window these days?  There is a major section of the driving test whereby you have to identify hazards, specifically people waiting to cross at zebra crossings!  I'm well aware of this as a good friend of mine was involved in designing the hazard perception section.  If people can somehow get through their driving test, why does all their training go out the window when it comes to these real life and potentially very dangerous situations?

I just wish people would take more care when they drive to and from work.  If drivers took their time and had a bit more consideration for pedestrians and drove safely, we might all actually get where we are going on time and in one piece!

Pedestrian crossings are not enforceable on private land.
10/05/14 Bobcat
-2

So this happened to me today. I was driving at Tesco's car park, turning right, there was a zebra crossing just in front of me and I did look carefully whether anyone was crossing it. I saw some shadows on my left, at the shop entrance, but I am convinced that NO ONE was actually on the crossing as I carried on driving.

Came back to my car to find that some twit had left a letter on my wind screen, calling me very obnoxious things because I haven't stopped even though she was about to push her pram onto the crossing, and on top of that they said they had reported me to the cop shop.

I hope that this letter was accidentally placed on the wrong car and I feel terrible about the fact that this happened whilst I was driving. But the thing is, the Highway Code does state, that the pedestrian should always check that the traffic has stopped before she or he start to cross, or push a pram onto a crossing.

They should also give traffic plenty of time to see them and to stop before them start to cross. Traffic does not have to stop until someone has moved onto the crossing. I swear that there was no one on that crossing. Not even a toe!
19/04/14 Just a driver
0

Almost 2 weeks ago my daughter was cycling across a toucan crossing.She was almost half way across when a van ran the red light,hitting her,sending her up on to the windscreen,rendering her unconscious and throwing her quite a few feet down the road.The police and the Doctors and nurses are amazed she wasn't killed.There were plenty of witnesses who confirmed he ran a red light.It's unbelievable she hasn't got any broken bones but was left with a deep laceration on her leg which was virtually to the bone and she is covered in multiple bruises and cuts.
I'm disgusted that the police are recommending he attends a driver awareness course instead of facing prosecution.It only amounts to a slap on the wrist in my opinion
23/08/13 Suzy66
0

That sounds like an infamous troll/poster on this site who was banned. I forget his name, the one who came from 'the north side of London Town' and had done so much in his lifetime that he would have to be about 450 years old for even half of it to be true.
20/06/13 Friday Lunchtime
-7

I'm with you there little buddy, to be honest HF, they probably wouldn't even get cs, perhaps just a measly fine. I think a suspended sentence would be more appropriate to be fair - but thats just my opinion - take it or leave it.
19/06/13 Cornish Roy
4

Iv`e lost count of the number of times that iv`e had to jump out of the way on zebra crossings because some moron couldn`t be bothered to slow down or stop to let me cross. The trouble is that if they do run someone over, they`ll most likely only get a few weeks community service, which is probably why they couldn`t care lees about the safety of pedestrians.
19/06/13 hairyfairy
-4

some of these moronic drivers do not recognise the zebra crossings in grocery store carparks - because they dave are in a carpark they assume they are not obliged to stop for pedestrians - how very pathetic.
19/06/13 Craig D
3

these women driving through red lights are most likely to be single mothers on benefit with 9 children whose fathers are unknown and the mother is driving whilst high on cannibis/crack/smack.
19/06/13 Nick
-7

Nearly got hit by some stupid woman again today going through a red light on the same Puffin Crossing! Concentrate on what you're doing (please). Red light means 'stop' not 'keep going'. The car was a light blue Rover 200 Series. Didn't catch the number plate though. Location: B6030 Mansfield Road in Clipstone Village, Nottinghamshire. Twice in less than a month i've nearly been hit. Hope she gets a ticket. And the same for that idiot the other week.
05/09/12 raging kiwi
-18

These shitboxes are absolutely everywhere - ugly pointless buses usually driven by 2'6" women who can't see over the steering wheel, have only one kid in the cavernous space behind her and takes up several spaces in Tescos as it's impossible to park. They must cost about £5 second hand as everyone seems to have one.

Nearly got hit by some stupid woman driving a silver Vauxhall Zafira registration EX53 LPP the other day while crossing at a Puffin Crossing. Traffic lights were red, the bleeping thing was bleeping (sorry, don't what it's called) and the idiot went through a red light just as I had started to cross. She said 'sorry' to which i replied 'you stupid bitch'. Then a little bit further down the road she called me a moron! I wasn't the one running a red light. She nearly hit me & 3 other people. Concentrate on driving next time. Do that again & i'll trash your car. Anyone who goes through a red light (except the emergency services of course) is a complete idiot!
22/08/12 raging kiwi
-23

Now that I am back I will have another go, as you put it. As far as I am aware pedestrian road safety and The Highway Code have been taught for many years in our schools and even ROSPA recommends that ALL road users read and familiarise themselves with it.By the way you never did tell me who you think the rules for pedestrians are for. However in the context of the legality of road marking on private land this argument is irrelevent. Local authorities have a duty to make sure that all road markings, signs etc conform to strict lawful dimensions and layout etc, most requiring a traffic order as well. If they do not conform to these requirements (and it is highly unlikely that anything on private land does), then in law it does not exist and you cannot be prosecuted for digressing against something that is in itself unlawful. Let me be clear Boblet, I do not advocate ignoring crossings because they are not legal but I do think that all road users including pedestrians have a duty of care towards themselves and other road users.
16/07/12 Bobcat
38

I will have another go. A pedestrian in a supermarket car park has not passed a test he/she just have their common sense in varying degrees. The chances are that most pedestrians have not even read the Highway Code, they are not obliged to do so. There is also a considerable difference between laws & rules, drivers must read the Highway Code & obey both then prove that fact by taking a test. (Unless you live in Bradistan then you can pay somebody else to take the test for you) The laws relating to pedestrian safety always apply irrespective of where you are driving. It is the drivers responsibility to drive safely, there is never a time to ignore pedestrians.
06/06/12 Boblet
-48

Dangerous things people do when driving