In this country, I can count on one hand, the number of times I have driven in fog that required fog lights in the LAST TEN YEARS.  And, on a motorway, I was doing 20mph because I could not SEE far enough to go any faster.  The vehicles I could see in front of me (less than 40 yards away) with their fog lights on were a blur, just visible.  On the rare occasions that this happened, it was some of the most frightening times I have ever spent behind a steering wheel!

People think that they look "cool"

Now, rear fogs lights you don't see as often these days; still there's the odd one or two idiots who have forgotten that they have them, like blinding people, or maybe they just don't care... but the FRONT fogs lights have REALLY kicked off. People think they look "cool". 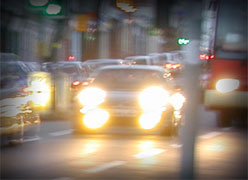 Let me tell you, they don't look anything except BRIGHT and they actually make YOU look really STUPID!

A lot of the time, they're misaligned, so that they shine up higher than they should and that makes them appear even brighter.  They should illuminate the road out to the sides of the car and about 20 yards ahead.  They don't have beam shaping like headlamps do, meaning that they aren't dipped to the right and high on the left.

They are NOT an adequate substitute for properly adjusted, properly used headlamps.  So WHY do people use them the way they do?  In fact, I don't want to know why - I want you to turn them off.  Now.  Or I'll smash them!

@ Poo pot, surely four lights showing is the correct way to drive at night (or in conditions of diminished visibility) - two front ones and two at the rear.
17/07/14 Seagulls
0

Here in bradistan we have the Cyclops syndrome we have also moved away in many cases from a bright clear safety light, to a softer, golden, flickering, glow from a mono light, the same applies to our fog lights we have different combinations, adding to the mystique. Our taxis lead the world in Cyclops lighting.
16/03/14 boblet
-1

Damn pointless most of the time. Yet another gripe about 'bad driving'...join the many others on here.
Cars have various lights for different road conditions, so do driver friendly lights have to be considerate to other road users? I have front foglights myself and though they behave well in the fog public opinion seems varied. I can see better sometimes and then boredom sets in. The driver coming the other way had screwed up eyes on his poor face half the time!! The key is turning them off when not needed - works a treat!
15/03/14 collar
0

What is equally annoying and dangerous is the amount of drivers who do not bother with foglights (front or back) when it is in fact, foggy.
And I agree with 'Oi', these daytime running lights do look silly, I think Volvo were the first to introduce them on it's cars back in the 80's.
17/06/13 Craig D
4

"What about those silly 'fairy lights' what you get on newish Audis ?"

100% agree, they are crap and pointless - daylight running lights I think they are supposed to be called - something about stats from Sweden and Canada proving accidents reduce if cars have lights on during the day. Well that's fine during the day I guess, but it's not necessary at night - cars have this handy device called "headlights" that do the job just fine.

I am glad to see they irritate and annoy other people and not just me. They are such an inconsiderate thing to use and rarely are there any suitable conditions to use them correctly in so they are pretty much pointless on cars.

As people cannot or will not think for themselves and think of others, it would take 100's of police to nick them all before they will turn these bloody lights off.

2 types: young drivers in Peugeots, and drivers of massive buses such as Shoguns or Range Rovers
21/02/12 Oi
-3

Travelling at highway speeds at night time in clear weather and a driver comes up behind us with low beams and fog lamps lit sprays too much light into the rear window and rear view mirrors where has common courtesy gone on the highways ??
21/02/12 rubenoff
1

....and so it goes on, a light mist descends on the way to work yesterday (and it was a mist, I'm not exaggerating for effect), and yes, you guessed it, on come all the front fogs like a bunch of mindless lemmings.

Would like to see a series of signposts labelled "Free Money" directing to the top of Beachy Head - all of these lemmings would doubtless follow....
26/01/12 Oi
2

Ok fair play, you got me, I misinterpreted your post.

Why is it that a percentage of gripers don't read posts properly? You can have as many long posts as you like. I will read or not read them, but whatever I do, I will do it properly.
What I asked for was the facility to write short posts as well.
21/01/12 Boblet
-18

Fog lights should only be used when it's foggy