I read an article in the news today about an elderly woman, who was attacked by youths in Salisbury, Wiltshire as she left a chemist shop.  The 81 year old was a victim of â€œhappy slappingâ€, a craze that has recently swept our country.

I find this sort of thing disgusting and it makes me very angry.  This happy slapping thing is stupid enough, but when the victim is one of our more vulnerable members of society I just see red.

Happy Slapping - A phenomenon said to have originated in south London where gangs of youths known as yoots or rude boys will pick a random passer-by.  One of the gang will then attack this person, whilst another captures the act with their mobile phone.

The media and the parents are as much to blame as are the kids themselves.  Parents nowadays it would seem, donâ€™t know how to teach their kids to respect their elders.  Kids donâ€™t respect their parents, their teachers, the law, and other peoplesâ€™ property; in fact they donâ€™t respect anything anymore, not even each other.  What kind of a society are we turning into?  What is it going to be like in ten or twenty years time when these louts grow up? 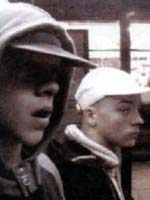 Are they going to magically learn that there are boundaries to behaviour, and that to go around hitting people is wrong; or, is the more likely scenario one where itâ€™s okay to beat people senseless whether or not it is on camera?  Iâ€™m going to be old and possibly vulnerable one day also.  I just hope that by then this stupid and violent happy slapping craze isnâ€™t still a part of every day life.

Iâ€™ve pointed the finger at the parents up until now, but I think the media should share some of the blame also.  Do you remember a few years ago the Tango adverts that were on television? These were responsible for a spate of ear slapping incidents in which some children were sent deaf. They were only copying the antics of the big fat orange man in the advert as he â€œtango-edâ€ unsuspecting members of the public.  These days, we have shows such as Trigger Happy TV and Jackass to teach our children new forms of violence and stupidity.

For the comment of judging by outfit. Its not halloween. Why dress the part if your not a criminal? Cool?ok then get what you get. Dress like a hooker get rapped and see what help you get. Revictimisation. Dress like a human then and not a thug. Look like a thug and dont complain that people think your a thug if you look like one. Do what you do and so will everyone else. Duh!
04/10/13 marciasundin
1

Target in minnesota. Have not been slapped yet. But just about everything else. Hang em. Death penalty after speedy trial. YES!
04/10/13 marciasundin
-2

"Does the phenomenom of 'happy slapping' actually exist outside of the pages of the Daily Mail?"

What, when the Daily Mail isn't continually harping on about Hitler/Kate/Celebrities/House Prices/the BBC?
you're right, probably not.
26/10/12 Oi
-3

Granny G your spot on. The mums, fathers and all there nasty offspring should be eutthanized. We need to stop pandering after the unsocial aspects of our society and use stern punishments to kill off the reporobates that make life miserable for the decent majority. Violent crimes should not be tollerated.
09/05/12 Veteran
-5

I'm from the USA, and I think it's outrageous. The first time a kid does it, the sentence should be 50 hours of community service. Let little mister tough-stuff scrub floors at the soup kitchen and clean the toilets at the AIDS hospice.

Greetings to all the respectful teens and adults. Now for the mothers of these misbehaving kids: The nasty doped-up women who spout out a kid every 9 months with no clue who or what sired it, and leave it on the streets unsupervised expecting the government to take care of it as it commits crimes against others, should be locked up in jail right alongside their offspring. The nasty "mum" has the time to spread those legs and spurt out a kid but no time to TEACH it anything? Of course "daddy" probably didn't hang around long enough to know he sired anything. If you know a woman like this, do all of England a favour and take her aside and explain to her that THAT is not how one should DO things. One should have some integrity and self respect, -- in other words, don't be a "ho" plopping out unwanted children because you're too stupid OR LAZY to get your life in proper order.
05/10/10 Granny G
-7

I agree that happy slapping is horrible- but I think it is wrong that some people are then lumping ALL youths or people that wear hoodies/caps etc together. I like to wear hoodies and caps, but I am nothing like those kids that happy slap or anything like that. There seems to be a misconception that all youths nowadays are rude/violent/uneducated.

I myself am disgusted at those that take part in 'happy slapping' or those sorts of things but unfortunately, being of the same generation- it seems that me and my friends also get lumped as one and the same. I hope that people can actually open their mind to the fact just because we are of around the same age doesnt mean that ALL youths that hang out together will smack them.
22/05/10 Emma
-1

I have the perfect solution, its called the 'Birch' the best way to embed respect and humility into these monsters.
16/04/10 Rider of the Apocalypse
-14

You have to look at the parents of these 'Kids'. They are not teaching them the moral rights and wrongs. It is totaly unacceptable to hit people, but some parents these days fully encourage it! I think the Police should be given more power over them. Bring back the days where the local bobby could grab the troublemaker by the ear and drag him back to his mother, for her to give him hell!
02/03/10 Gooey
-14

I was in spondon going to asda with my cousin when these chavs came up to us and told my 12 year old cousin she was a slag and a hooker, I told them thats not the kind of thing to say to a 12 year old. the followed us about a mile down the road taking it in turns to slap us round the head. its just not ok.
19/12/09 N3rd
8

I completely agree with Vinnie, Those in my country don't do happy slaps but look 4 a fight with people 4 no reason.However, I always control my temper from exploding or else they might end up being under their grave or having a big scar on their face. But if we do this we might as well be hooligans ourselves. We might even be in court 4 fighting back. (Sigh) those who wanna act tough or look for a fight. Get a life. Or at least do something good 4 a living
08/08/09 Isaac Khoo
-22

I don't know why, but everytime I see a kid in a hoodie/baseball cap/gold chain/trakkies etc, I feel an overwhelming urge to push them under a lorry.
31/07/09 Antichav
-1

I think violent yobs who do happy slapping should have the death penalty!
31/07/09 Terry
0

I Find this disgusting too, the people involved should be Jailed for it. The Laws on youths should be very strict.

This also makes me angry too, I was slapped couple of days ago while waiting for bus they asked for a cigerette and slapped me 1 luckly I walked away as I did have a very violent ways at school towards bullies. Now I have to find a new bus stop and keep in view of the cars that passes. Gang of kids who approaches me makes me nervous. When 1 person noticed a mark on my face I told him why we ended up having a discussion over this why should kids get away with it when we cant.
These Youths needs to do something better than being sad asses. They also need to get a life.

Instead of Using the Console, computer or watching TV do something else, Children should have their computers, Consoles and TV out of their bedrooms. As for TV concerned, I hardly watch it now because it is full of rubbish, I dont own a console but I do use my PC for chatting to friends or playing bowling and researching. In weeks I took up bowling more and going out due to computers causing computer vision syndrome.

if I hit that lad if I was to fight back in a temper for slapping me, he will soon go crying to his mummy and I would get in trouble by the police. Well I did wish him ill for smoking. Their ways of bullying is what makes me not like kids nor having to deal with them, I chose not to have any.
.
What is so good about slapping or beating another person?, It is really sad and stupid.

Also kids should be in at a certain time, if disobeyed the law should prosecute the parent for not telling them, it is bit like truancy same applies to kids committing an offence after all it comes down to the parents not doing much about them and being Boneidle.
15/03/09 Vinnie
-13