It makes me sick when I hear how some people in this country can be so cruel to animals, particularly cats.  All too frequently there are stories in the news of cruelty and horrible deaths and it has just got to be stopped.

Whilst on my routine journey home after work yesterday I switched on the radio as usual.  The news came on and I could not believe what I was hearing, my guts completely turned and it brought tears to my eyes.  Two youths in the town where I live, had thrown a young 7-month-old cat in front of a car and filmed the sick incident on their mobile phones. 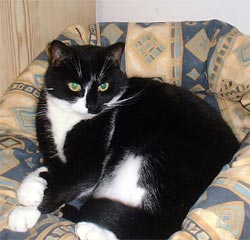 Unfortunately when they were confronted by the driver of the car they ran off (cowards!) and so will not be punished for being so cruel to a helpless little kitten.

Happy slapping seems to be the latest craze amongst youths.  I can not get my head around how anyone can be so sick and wrong in the head to actually go and do something like that and worst of all capture it on video.

These mini-snuff movies involving cruelty to animals (that are apparently doing the rounds on a lot of mobile phones) are just completely sick and degrade the standards that humans are supposed to set. 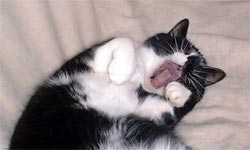 I mean it makes you wonder what sort of parents these sick individuals have.  I thought we were meant to be a nation of animal lovers.  They should catch these kids, severely punish them and then put them on a list so that they are never allowed to keep animals.  In fact, if I had it my way they would never be capable of owning an animal because if I caught someone doing this kind of stuff their final moments would be very painful.  I would be prepared to do time!

(PUBLISHER NOTE: The cat shown in these photos is not connected in any way to this incident or any of these stories, as far as I'm aware 'Mogsi' is still alive and well and living with my ex! He always did like posing for a photograph though.)

For people who love cats

If like myself you happen to love cats then the RSPCA is the place to report incidents of animal cruelty.  There's also Cats Protection an organisation dedicated to the care of UK cats and Cat Chat, which is another cat rescue resource.

I remember my mum was driving home and we saw a cat twitching on the pavment and then died it was a sad moment :(
22/10/14 me
2

Cats are the ban of my life , i cannot leave a window open if i'm not in the room , they jump in ,,, i'm allergic to the blasted things , and was injured driving two of the out of my bedroom i've got to get some legal advice about this , you can have all the dirty , smelly . lazy useless creatures
11/08/13 puffy face
-30

Sorry, I meant to say that the vendors claim that the "nutrient liquid" keeps the animal alive up to 2 months.

Obviously they soon die with no oxygen.

Despite protests there is apparently a brisk trade in these abominations outside train stations.
08/03/13 Fed up Pedstrian
-29

Posting this here as no general thread on cruelty to animals. Cruelty takes place everywhere but China seems to have no rules or laws regarding animal welfare. Look at the stories regarding the skinning alive of raccoon dogs so that people can wear fur trimmed hoods and jackets.

The latest refinement of cruelty is "living key chains". A fish, tiny turtle or salamander is kept in a sealed plastic bag and used as a charm or key chain. It can live up to 2 months in this plastic tomb. Words fail me.

I am going to be checking the origin of goods that I buy and avoiding products made in China, whenever possible - althought that is hard to do these days. Worth a try though.

If it was me who would pass by a stray or sick cat, as I have a big big heart in me I would even try to pick it up and take it home with me and give it help. I know my neighbour's cat comes by to visit me for cat treats because she is so friendly, she has known me for a little over a year now.
10/01/13 D
-16

I don't understand how a person can easily just ignore an animal that is either sick or a stray in need of help. Today I saw a stray cat in a very large sheltered Tesco car park. Some of the customers didn't seem to care and carried on walking past. I told the manager of the store and she couldn't care less. I then called rspca and they didn't want to know, I have know stopped my monthly donations. I think stray animals such as cats and dogs should be rescued either by the rspca or the local council. People can be so cold hearted
08/01/13 N/A
-24

I will beat anyone mercilessly to a pulp if I see cruelty to a cat. Thats why I carry a heavy baseball bat in the car.
15/12/12 Needler
-26

I think people who are cruel to cats or animals in general should do some kind of punishment for what they did.
08/12/12 Donna
-32

I have just realised that the petition is now closes. It was open for a year I believe.

In that time only 83 people in the whole country bothered to sign it. The link was posted here several times.

It should have been about motorways or parking. There might have been more interest.

The indifference to suffering is shocking and depressing. Anyone who actually cares could still contact their MP about it. There is an increase in so called " fun fur " this winter. Not everything labelled as fake fur actually is.
05/11/12 Anon
-25

Posters have surely read that some of the fur that is used in fashion items comes from China and sometimes is the fur of beautiful raccoon dogs that are clubbed and then skinned while still alive.

There is a e-petition to demand that the goverment ban imports of these products.

Please sign it and ask everyone you know to do the same. It is very little effort to try to end this intolerable suffering

The obfuscation of your comments must because you are of a bibulous nature.
Or you are quite mad, or just a tosser.
10/11/11 Buxom Dyke
-38

Apparently the person concerned was giving a practical demonstration of that old saying
‘Not enough room to swing a cat’
They are therefore to be congratulated, for passing this knowledge on to people who are illiterate, but who can gain knowledge by way of a visual demonstration.
Tossers
10/11/11 Buxom Dyke
-36

Happy slapping thugs should be jailed

Cruelty to pigeons, there's no excuse for this

Fireworks banned most of the year or made illegal