It's that time of year again when city workers like me dread the trip into work on rainy days as we battle through crowds of other commuters carrying deadly weapons, using them indiscriminately without any thought for fellow travellers. I'm talking about umbrellas here, and the way that their sudden appearance on wet days can make a trip to work seem like jaunt through a mine field.

Long pointy umbrellas or stubby umbrellas resembling a police truncheon, they come in all shapes and sizes but do damage to the sleepy commuter just the same!

It's not that I mind the fact that people want to protect themselves from the elements; it's just that people like me are the ones who suffer.  We are regularly poked in the leg or sometimes in the eye by umbrella waving lunatics.  On wet days I sometimes carry an umbrella myself, but it's not the heavy calibre model with a 5ft canopy and a detachable warhead to boot. 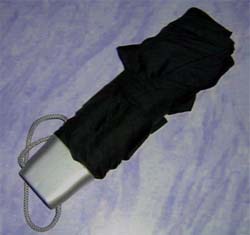 Mine is a stealth model that can easily fit into a brief case; it provides just enough shelter to keep dry but doesn't get in the way of other people when I'm walking down the street.

Another thing that really annoys me are those people who shake off the rain from their umbrella all over you when they come in from outside.  This seems to happen most frequently to me at the entrance of underground stations; they seem to attract the type of people who shake their umbrellas like a dog shakes its coat.

It's not nice being impaled first thing...

My point is, it would be really nice if people could think of others when they use their umbrellas.  It's not nice being impaled first thing on a wet Monday morning on the way to work!

Return of the killer umbrellas

I purposely get other people wet with my umbrella when it rains. It makes me feel big knowing that Ive annoyed someone. Poking them with said umbrella is also one of my favourite things to do but just slightly behind parking on the pavement so people cant walk past, bumping into people on the street, blowing my cigarete smoke into peoples faces and soaking pedestrians by driving through large puddles very fast in my BMW.
20/12/11 Return of the killer umbrellas
-9

Why do some men feel the need to carry those massive, multi-coloured golf umbrellas through crowded streets?
25/09/11 Insomniac
5

:Why do people who have umbrellas walk in the partially covered walkway areas in towns? What are even worse are the ones who leave their umbrellas erected and still walk in the undercover areas thus depriving non umbrella carriers of valuable dry space in which to get some temporary relief from the rain. On several occasions I have felt aggrieved at having to walk in the open air parts whilst people with umbrellas take up twice the headroom in the sheltered walkways. They don't care who they are prodding with their little metal spikes either and these cause far more of a hazard if the carrier is vertically challenged. Carrying an umbrella should in my view also forfeit ones right to walk under the awnings of shops.
11/11/10 Trickster
-13

I hope health and safety ban umbrellas. If they ban harmless flowerpots hanging from your wall, then I'm sure they should ban the DANGEROUS umbrella.
04/01/10 Terry
-15

when I see someone coming towards me with an umbrella I have a perfect method for making sure they do not prod me in the eye.I raise my elbows to adjust my hood,making sure my elbows Knock the offending brolly clear out of the way.
22/07/09 Mr Hicks
-6

The weekly gripe editors are f

Sod poverty - get a job. In another country, that's for our government, and unless you've got oil we don't care.

Oh come on. You can gripe about anything you like and the subject matter is personal.

Some people don't think smoking is a problem and who cares about teenagers getting pregnant. I don't give a rats if the CSA are hounding you - run faster. Starving people should be less picky... Got ripped off by a garage? Well get on your bike you lazy bum! You're wife's left you and your brother is having an afair with his uncle, who gives damn.

You get the picture? The gripe is personal and an umberalla that nearly takes your eye out is something that annoys somebody!
25/05/07 Me
10

I simply cannot believe you are argueing about this!! there are far bigger issues going on in the world. Parliment < poverty < starving people.
24/05/07 no name
-1

I've long held the opinion that an umbrella is in fact a deadly weapon in the hands of an untrained operator. Sadly this seems to include the vast majority of the populace. . .
13/04/06 White Knight
1

It has to be said though, some amusing sights on a wet windy day, watching the city goers umbrellas turning inside out while they try to look all posh and all.
15/03/06 michael caine
-21

I have a collection of rare umbrellas, several from the late 1800's and a few early 1900's, it is surprising how many designs have emerged since the 19th century. The early ones would be lethal weapons today, in the crowds that we have. I dread to think how many eyes would be gouged out in this day and age with the early designs.
01/11/05 Brollyman
-7