I was in the middle of cooking a Spaghetti Bolognese last week and a spot of bad planning on my part meant that I had run out of one of the more important ingredients.  There weren't any onions left in the vegetable rack and as luck would have it all the supermarkets were likely to be shut (5mp on a Sunday!).  There was only one option left open to me.

Off I went round to the corner shop to see what they had.  I vaguely remembered seeing a fruit and vegetable section there before when I popped in for milk or something.  I don't often use the corner shop, only in an emergency and these occasions are few and far between.

The reason for this is mainly because they're too expensive and quite frankly, it's not all that pleasant in there.  There's a kind of musty odour about the place and I'm not entirely convinced the place gets cleaned very often (if at all).

They had onions though, half a box of them in fact.  So I quickly rummaged through them and pulled out a couple of decent sized ones.  I thought I might as well get two because it's always handy to have a spare onion and I wasn't sure I'd be going out to the shops the next day.  I usually pick a nice firm onion because they tend to be fresher, however, there really wasn't much to choose from here and they all seemed a bit on the squishy side.  They didn't look bad or anything so I figured they'd be fine for a couple of days.  The man behind the counter charged me 50p for these which personally I thought was a bit on the steep side, but there again you expect to pay a bit more for the convenience factor don't you? 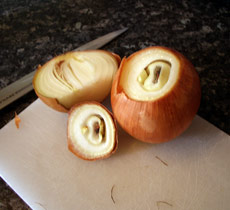 onion - it was all rotten in the middle

Back to the kitchen and I'm preparing our meal and I sliced into one of the onions only to find that it was all rotten in the middle.  Okay I thought, so it's a good job I bought two and sliced into the second onion to discover exactly the same story.  Basically I'd just gone and bought two bad onions from the corner shop for 50p - bit of a waste of money really when you can get a pack of decent ones up at the supermarket for the same price.  I was pretty cheesed off with this, but somehow managed to cut out the best of both onions and somehow scraped together enough to cook the Bolognese - just chuck in loads more garlic, it's the same family and no one will know the difference!

I guess I should really have taken them back and either exchanged them or got my money back, but the prospect of standing there in the shop slicing up onions until I found one that wasn't rotten didn't entirely appeal and doing without wouldn't have worked either.

It just irritates me that basic standards in shops are so low.  If the large chains were to let their standards drop they would go out of business very quickly.  The little corner grocery stores seem to get away with a lot more though, presumably because they're open all hours, every day.  What would you have done in this situation?

Is it a British thing? the 2 med sized supermarkets in my town both sell rotten onions all the time. It's like 50/50 good/bad and you can't tell til you peel them. I have to buy a pack of 3 for a decent chance to get a good one. We're just used to the idea that the papery outer layer can look bad, but it should be ok inside, but it's not always so. I bet Italians, French and Spanish would be horrified if they saw the shelves filled with mouldering refuse that we put up with.
02/06 Jamie_C
0

I just threw out a bag of onions I got a Krogers that were beautiful and hard on the outside but had turned totally mushy and rotten smelling throughout the inside layers. That is the first time I have run into this problem. Could these onions have been from flooded fields early in their growth?
05/04/20 Khem
0

You should consider yourself lucky they didn't sell you a bottle of fake vodka which would have made you either blind or dead. Corner shops are to be avoided at all costs because they source their merchandise from wherever it is cheapest, never mind the back of a white van. Personally I think all corner shops need to be raided by the Trading Standards on a weekly basis.
03/12/13 Nick
0

There has always been an issue with these local shops that sell food; back in late 80s there was a shop called 'Happy Shopper' that was eventually closed by Environmental Health as it was in an appalling state; food stocks were not renewed and my brother once bought a box of dry cat food only to find it full of maggots; I also remember the freezer had food in there that should have been thrown out.

When the shop was closed down, the local newsagents next door bought the shop and knocked it through; both shops are now a Costcutter. Standards have improved very much but I had to report the shop last year after I bought a yoghurt and realised it was out of date by 6 months; the shop was also selling items from multipacks as seperate items such as crisps, etc. I have now learned that I carefully check anything I buy from the shop and if it is out of date I put it back.
08/06/10 DW
-9

Iv`e had this experience a few times myself. They small shop owners are always moaning on about supermarkets putting them out of business, but what do they expect when their food is overpriced, of limited choice, and their veg is often going off. If it wasn`t for supermarkets, many people would go hungry, or have to live on bread & packet soup.
12/04/10 anne
-12

Tesco aren't any better. Went to cook today with an onion bought there and it was all rotten in the middle. Still, the next two were okay so not as bad as yours obviously.
27/03/09 Rick
4

I don't like to use the corner shop because their prices are too inflated, I only shop their out of desperation. Give me Tesco anyday or better still Asda if you're lucky enough to have one.
22/09/08 lass-from-wales
-2

This is the local authority and its fatcats neglecting to perform its duty of protecting us and our health from rogue traders. Either because the complaint system doesn't work or becuase the local authority has so successfully hidden its services thta no one knows they exist.

Never buy fruit and veg in Tesco. They appear to operate a policy where they cannot display greengrocery at the correct temperature. It is of consistently poor quality, ie. stored in near freezing temperatures for weeks on end, then, on being brought in to the store, immediately starts to rot. I now avoid Tesco as much as possible as I was getting fed up of returning spolit produce on a weekly basis.

And what is it with those collar guys? Such asinine, pointless, verbal dribbling - so very representative of how intellect-poor this country has become.
18/09/08 Spuddy
-2

Tho I admit to defending them previously even im finding them an annoying, mindless bunch of twerps now! Ooh, that post count is going up, woo hoo!
17/09/08 Digsy
-10

Good luck Digsy but you've got 115 posting to go to catch me up! And those sad pathetic little oxygen thieves with their mindless drivel about collars seem to be posting a lot now.
17/09/08 MikeP
0

Nothing worse than smelly garlic breath