Buy 2 get 1 free... or alternatively buy 1 and get ripped off.  That's what it sounds like to me!  Come on, why can't we just have a third off, so if you want to buy 1, 2 or 3 you get the same deal? But still it's a promotion right, so what am I griping about?  Bogofs (buy one get one for free) and multi-buy offers are SO WRONG! for lots of reasons.  First they are deceitful - the price goes up for one item and suddenly buying two gets you a "saving".  Then they are dreadful for the environment since food is inevitably wasted, especially when they are used on perishable goods.

...totally discriminates against single people like many students and pensioners

Sometimes it is cheaper to buy more than less, for example 3 for a 1 and 1 for 60p.  However, I think that life is complicated enough without trying to calculate the unit cost of everything and then toying with the likelihood of using that extra item or not?  Then there's the worry that if you do, did the till get it right and take the discount off?  It totally discriminates against single people like many students and pensioners... and err... griping 30 year olds! 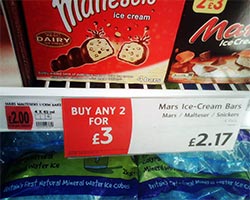 Shops can't say something is on sale or reduced when it has not been sold at a higher price for a period of time.  But they can change the price on a single item and promote it on a multi-buy.  And all the supermarkets do it so the market is not providing choice.  It's time we broke up this deceitful marketing cartel.

I've complained a lot about this but many ignore you when you ask them to justify the practice or when you ask why certain soft drinks went up at the same time as a multi-buy.  The soft drink manufacturer ignored me too.  Even my local supermarket who purport to be "ethical" seem to think selling everything in the fridge on a multi-buy is fair and consistent with their much hyped environmental stance.  Actions speak louder than words!

Those with larger households can still take advantage of % off promotions as much as they do now. But as a single shopper I am tired of being ripped off or not being able to buy what I want because I don't want to buy three packets of 4 chicken breasts at one time!

Bogoff bogof.  If we all stop wasting food that could have been eaten, the CO2 impact would be the equivalent of taking 1 in 5 cars off the road.  Make your voice heard.

If I were selling something I would state my price & my discount for bulk purchases. Why are farmers any different? State your price if the supermarket doesn’t want to pay it, tell them to sod of. Or are farmers continuing to play the, I am a poor farmer game?
04/02/13 boblet
-2

I would like to say that I think buy one get free should be illegal.You can't say I just want the free one so surely its misadvertising and advertising standards should stop it.The supermarkets would like you to think they care about but they only care about their shareholders.Selling more is bad for the enviroment,bad for obesity and the manipulative offers give no real choice and hence if you short of money don't help you to save for the other neccesities of life.I went into Tesco just before close at 10pm and the staff are throwing all the bread into binliners rather than sell it off cheap at a time when some are struggling desperately.Surely this is the unacceptable face of capitolism.
04/02/13 jim
2

Some supermarkets put items on BOGOF to get rid of stock they didnt sell. it kinda gives you a clue on the true price of that item they bought in, it is in attempts to empty there warehouse for things that are selling.
But you get this push pull of stock that sells and doesnt sell. If you notice nothing is truely on sale anymore, it is old stock that didnt sell. It cost the company a lot of money to store this stock in there warehouse, so they get rid using a so called sale or BOGOF.
There is no consipracy of why they do it, its a tactic that the modern business must use.. otherwise they have 2million bottles of diet pepsi taking over there christmas cake storage.. come christmas no cake.. or worse.. cheap coke, cause pepsi is not on sale..
04/02/13 jim
-1

Felt from the heart

These bulk buy offers are so unfair to pensioners, many of whom are existing on a state pension and then being ripped off buy the big supermarket chains by having to pay exhorbitant prices subsidising the bulk purchasers greed, its disgusting.
24/03/12 Felt from the heart
3

Could not agree more, but the real problem here is the law. The original idea was to prevent customer being deceived and introduce controls on BS 'special offers' that are just normally priced goods. Unfortunately it all got diluted by politicians under influence of industry, they only have to show the higher price for 30 days in one store, then it can be a special offer.

It is just a waste of everyone's time and marketing people are getting alot of money to come up with these deceits and does nothing more than to devalue the economy.

Sure stuff should be cheaper the more you buy, but BOGOF is already packaged for individuals so there is no real saving.
01/12/10 Tony
-10

Play it to your advantage. In at least one of the supermarket chains, the EPOS software will calculate the multibuy discount, but if you wait for the bill to be totalled and then say that you've changed your mind (or your bill came to more than you were expecting and you don't have enough money, or something similar) and ask for one of the multibuy items to be taken back, it'll deduct the full amount for that item. In some cases, you can use multibuys to get a discount on your shopping. If the offer is £4 each or 3 for £10, you can put the items through the checkout and £10 will be added to your bill, but if you ask for each of the items to be taken off, the software will deduct 3 x £4, saving you £2 on the shopping that you DO want.
17/06/10 Canny
9

John, left to me, I can honestly tell you all four chicken breasts would go down in one meal with me, along with the normal trimmings.
10/02/10 Gainsborough lad.
-10

single people who moan about BOGOF offers. what is their problem! I think it is fantastic that food is now so cheap, much better than when I was a child. So you have to buy 4 chicken breasts for the price of 2. Guess what, thats the same has having 2 free meals. How fabulous is that. I think the problem with these people is that they just don't know how to cook or freeze or store. Maybe, if the Chicken breasts, for example, came with instructions along the lines of put 2 of these in the freezer. Grill one of the other 2 for tea on Monday and pan fry the other one with some onions, garlic and tomato on Wednesday. BOGOF offers are fantastic they keep all of us with a fantasic supply of cheap food. More BOGOF offers is what we want to see. If you don't want the offer, why not be generous and just give it away, maybe the person in the queue behind you is not as well off as you think they are.
10/02/10 John
0

Same with Debenhams. Bought a dress for 17.50 with a big sticker on the label saying 'reduced to half price'. When I peeled off the five or six price labels, I noticed the original price was 30 pounds. They had increased the price to 35 pounds for a couple of days to allow the 'half price' sticker. Bit dishonest, as you say.
02/01/10 fedupinwales
-9

I had this argument in Asda recently. Fairy non-bio gel has been £3.90 in there since it's release date 18months ago. Then in October this year it went to Buy 2 for £7.00. Which in itself was good, but, they claimed a saving of £2.76 on the regular price of £4.88 each. It has never been £4.88!!! I raised the issue with the store manager who said "Yes it has, you're wrong". So I went to trading standards and they came back saying that it had been £4.88 in another store. Well personally I think this is dishonest! I never realised a £2.76 saving as I had never previously paid £4.88 each. I don't think they should be allowed to advertise an offer in one store based on a price from another.
22/12/09 Freddie
0

Another way that they con customers is with “reductions” where they quote an original price that only has to have been the price that was charged in just one branch for 28 days.

That the branch was on Orkney and no one with any sense actually bought the product at the artificially inflated price is irrelevant, they can still legally claim the “new” price as a reduction.
14/12/09 Smithy
2

Some interesting comments folks and good to see some (but not all!) persuaded. As someone said you have a choice but I think it's a pretty rubbish choice - in my local shop tonight every item of fresh meat was on a multisave so not much choice there. But I can still buy 1? At 1 for £3.50 or 2 for £5 that's 40% more if you buy 1 so I think that's unfair, a bad choice and worth griping about. And going to the next shop isn't a choice either because they all do this manipulative practice. So no choice there either.
A local off-licence recently changed their entire wine selection to a 3 for 2 and readily admitted in-store that the prices had all gone up at the same time. Which is my point, they are exaggerating or entirely kidding-you-on that there is a saving. And ripping you off if you want only 1. With all due respect calling the supermarkets"Robin Hoods" is naive! If they had any decent justification for this practice (other than making profits by deceiving consumers into buying more than they want and over consuming or wasting) it is strange that they repeatedly ignore repeated queries in this respect.
14/12/09 Craig Watson
0

Glasses at high street opticians are too expensive