I have been looking for work since being made redundant back in April.   During this time I have made on average 5-10 applications a day country wide and have had an average of 2 interviews a week from end of May until today.  I still haven't got a job and I think I know why.  It appears that most companies don't want people that have been made redundant and they definitely don't want people that are currently out of work.  So how the hell do people like me get a job?

It's all well and good trying to get the long term unemployed back into work, but there are people work fit and ready to go today that can't get a job due to this weird and frankly impossible to understand attitude that employers seem to have.  Another thing I have found recently is that many companies like to play with your mind.  On the one hand they give you the impression that they want you, and then all of a sudden you're not good enough for them.  I have been told I am one of the best applicants they have had and would work really well in this company.  My track record and experience will make them money.  However in the next instant they hire a trainee who will be a burden to business for about a year.  They completely ignoring the fact that I could have hit the ground running and been productive from the start.  By the way I've taken a self employed role to keep me in the game, keep my skills up to date and keep the bills ticking over.

I'm fascinated by other forms of interview or candidate profiling, things like psychometric tests and competency based interviews.  Both serve no purpose to any job.  That's a bold statement, I know.  But I have seen it time and time again that they don't always work and need to be taken with a pinch of salt.

For example, I nominated an ex-colleague to work for my last company.  The rules had been changed and she had to sit a psychometric test and a competency interview.  She was the top biller in my last company, a real asset to the company but she needed to relocate to my are for family reasons.  Anyway, she sat the test and the results came back the next day to the boss's computer.  They were terrible, and it was obvious that she had dyslexia or some form of learning disability.  BUT...  She didn't even get an interview from these tests.  In the end she went to another company, pretty much picked up where she left off and to this day is a top performer. 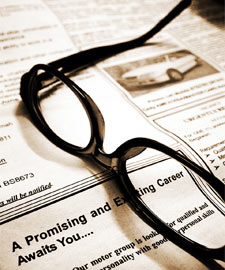 if they bothered to look at my CV...

I have sat competency based interviews, 'tell me about a time you worked as a team..' and if they bothered to look at my CV they could see plainly the last time I worked as a team.  You know, if you're ex military, play football or netball there's a good chance you're a team player unless unless you're have been stuck on a station in the South Pole studying snow!

I can understand these sorts of interviews being used for a graduate because most of them don't have a work background, so the interviewer needs to pull information from them.  But a seasoned professional?  A person that has done the job for more than 2 years will have the relevant experience for the job.  If the CV doesn't hold the information you require, ask for it!  Send an email or do a telephone screening.

Finally, the job application forms themselves are often useless.  You spend hours perfecting (or for some... buying) a CV that outlines years of work, experience and achievement, only to be told you have to fill out a simple dumbed down application form that makes us all look like we are stupid cause there is never enough space for one qualification let alone 15 years worth!  How the hell are you supposed to list your 'duties' in a postage stamp sized box at end of the page?

Employers have either got lazy or incompetent and I'm not sure which is worse.  We have moved away from being a mutual agreement of work, where they sell us the job and we sell ourselves, the end result being an offer may be made and accepted.  Instead of this we now have to sell our souls, and if you want the job how many hoops do you have to jump through first?

Maybe improving your spelling a bit might help.
02/04/18 grumpyoldwoman
0

I have been made redundant only this week. I am optimistic and possitive about finding work again soon. Then I read this post! Now I feel down and should give up before I start. Or - stop reading this nagative rubbish and understand why the author has not been successful in gaining employment.

My advise! Surround your self with possitive people.

A few years ago there was a standing joke about a 'McJob' referring to those that worked in fast food environments. Now, you can't even get one of these jobs.

You apply for a part time job at Costa Coffee, you are lead to a room in the back and be expected to act out a scenario. You are going to be handing out coffee, not auditioning for a lead role in a Spielberg movie.

There maybe me part time work available and in a lot of so called 'jobs' you are expected to work extra for nothing. What's this all about?

you will get comments and assumptions from company interviewers such as a gap on your employment history not reading well on your CV or a dig at you that you cant be very good as your last employer went into administration, even though it is not your fault and the company could have went tinto administration(went bust, ran out of money) and closed down through no fault of yours and by the actions of a large non paying customer dragging their heels about paying bills to your employer, or through the actions of a Bank or accountancy firm, or even the Tax man.
No matter what happens , if you are working for a company and it goes bust and pays everybody off, do not tell your interviewer or Agency about it if you can avoid it at all, just tell them about the last employer before that one, I dont know why but I will assume it is "human nature" as they call it but potential employers see a worker coming from a company that went belly up as cursed or diseased in some way and they may not say it at the time but they will cross you out and will not employ you as they will see you as a bad apple or tainted goods.
You may even get a smirky comment like "who was your last employer again, you never said on your CV, where have you been for the last 5 months??? ah ha ha yeah thats the company that went t-its up owing 23 mil isnt it? " and when you mention that a customer never paid your old boss 26 million he was owed, you get raised eyebrows all round and a chuckle, ahhm no thanks anyway bud but we will call you if anything comes up..
28/12/10 ChaCha101
-5

I too must express surprise that the State allows someone to remain unemployed for 12 years.

I am aware that in certain industries there has been a shortage of qualified and experienced staff however it is a fact that many of the recent immigrants have taken low paid unski11ed work which the indigenous unemployed population should really have been forced to accept.
15/06/10 Congo
-25

You can't do secretarial work, cooking, cleaning, waitressing, clerical work, child minding, working in a supermarket packing shelves or as a cashier, anything ..... menial or otherwise? Even if you are unqualified and not too bright, unless you are in some way disabled, then I'd say you're a lazy 'scounger' as you put it. 12 years .... come on .... get real.
15/06/10 MikeP
-34

I have been looking for work since 1998, & the people at the jobcentre seem to think that i`m a lazy scounger, but i`m 57.and employers are`nt really bothered with my age group. 'when I sign on, I get cross examined about my jobsearching efforts, and iv`e had my benefits suspended twice in the past year. it really is`nt fair.
15/06/10 anne
-19

Interviews now are worse than ever, employers ask stupid questions. I hated this one, "do you play nice in the sand box". I work so hard because I honestly want to do the best job I can. My current employer could care less and actually puts down my strong work ethics to take short cuts that end up costing more. The interview never mentioned I would be working with others that had no skills to do the job they learn as they go. I hear questions being asked all day that anybody in the field should know, but again, employers will hire grunt workers so save that ole' mighty dollar while the experienced ones do all the clean up. To you employers, WHAT THE HELL ARE YOU THINKING!!!!!!!!!
03/06/10 Pam
-19

The old my grandad story, I dont know how many people recycled this one ....as for a certain group of people, they would refuse to shovel up and leave it to a local, then take a job that they are not trained for from a plumber or builder by taking £3 an hour less, the work is sometimes no good but they dont care as they will be in another place when it falls apart following the tradesmen looking to take the good jobs
14/02/10 abbi0102
-7

My Grandad Got onto his bicycle, when he wanted work, there were no state hand-outs, if you want to work, look at the Poles, willing to shovel dirt at the building site for a decent wage.
Stop whinging you slackers, and get looking, unemployment will always be around for the ones who's hands are soft
20/01/10 Yablonski
-23

I have just spent a year looking for work after being made redundant (43 years old and the first time in my life unemployed) and to be honest I don’t know who the worst was?

The Big I Am’s who think they can treat you like dirt or the clowns at the Government run agencies who look down their noses at you because you are unemployed!

Four times I applied for and was rejected for vacancies within my local Job Centre – however on several occasions I had to spell words for the so called staff in there?
07/01/10 Fubar-UK
-11

I enquired about a job this morning and the women was clearly sexist about the fact that I was applying for a job that involved driving a forklift, what chance have women got in a supposidly equal oppourtunities enviroment when it is the women discriminating themselves!!!
16/11/09 gix
-20

Email about jobs that don't match my skills