Some of you may remember that I wrote a gripe about a friend of mine from South Africa who I felt was taking advantage of my kindly nature - here is an update, which I hope can generate some advice from anyone who may read this thread, or may have been in a similar "predicament" to myself:

In the last two years since bumping into him again, I am still struggling to know what to say and do for the best.  We go out pubbing and clubbing, usually when we get paid, but when we do go out, it seems such an almighty chore.  My friend has a car of his own, he will drive from his home, only as far as the Park & Ride facility then pay at least £4.00 on the fare, when he could use his own car!

When I do meet up with him, he always acts as though he doesn't know me, he acts quite rude and always likes to follow set patterns every time.  I like to be more spontaneous but as he has not bought his car with him, we are completely restricted as to where we can go plus he needs to get back to the bus station, to catch the last P&R bus at 19:00 - he seems extremely edgy behind the wheel, he takes idiotic road behaviour personally and this will upset him and he gets very distressed with it. 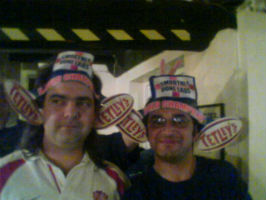 I have given him words of support, as much as you can, but I feel as though he does not digest this; he will carry on as normal.  I find it very ignorant, rude and when we go out clubbing, he does not drink anything alcoholic, he will be completely sober on the dance floor and the most annoying thing is, he will constantly poke me and hang around me, and stand opposite me and will be whispering in his friend's ear and smiling.  If a young lady catches my eye, he will stand ahead of me and he will be grinning superciliously, and also we attend Zumba classes every Saturday - there is a girl interested in me as she makes lots of eye contact with me, but I am fed up of seeing him watching me in the mirror and as we all dance, he tends to shove me towards her.  He is being extremely immature; either that, or my expectations are very high.

In the past, he has had the audacity to "dress me down" when we fell out over honest emails about where I saw our friendship going and letting off some steam.  He took me to a private place one day when we met up and he had the audacity to call me a "coward".

I am NOT a coward in any way, shape or form!!  I have grown up in an unstable, aggressive background where I have learnt to become tough and streetwise as I've got older - my friend is very weak, he seems to think he?s tough but I do all the talking and negotiating and anywhere public he will say "you go first" - I apologise if this gripe is fairly heavy, but I don't know what to do!  He never replies to my emails - he does when it suits him; when I send him a text, he doesn't reply, and when he doesn't hear from me at all, I'll get heavy emails, texts and voicemails as well!!!

Any advice is greatly appreciated!!

The ones who are well known for this kind of behaviour is the Pakistanis, Indians, and the blacks.
25/03/14 One Tongue
0

Who says that people need friends anyway, friends can not like you and talk behind your back about you and what you do. Friends can like whoever they want to, but can like you one minute and not the next. Anyway who needs friends. I sure don't.
27/12/12 D
-4

Sounds like a South African who is still trying to connect with you as a friend but finding it difficult to brake barriers (Hence the boy playing). Such is the African male. Perhaps you need to realise there is such a thing as different culture and find a connection and understanding.
29/05/12 Boer
-3

Peejay, A problem only remains a problem until you find it's root cause.Once you find the root cause, you will see that the solution is easy. The root cause of your problem Peejay?
Are you more dependant on you friends friendship than he is on yours?

You are an assive-aggressive masochist. Admit it, you enjoy it, or you would not keep subjecting yourself to it. You cannot change someone's behavior, but you can change how you react to it, but you won't.
18/03/12 Rugbyruler
13

@ Youthful Griper: you are spot on there! I am wondering if this is the case - when I've looked online and done some research, he matches most of the criteria. One place we went to a few weeks ago, he needed to use the toilet, and the only one available was the disabled one - he came out of the toilet and said: "I'm glad I'm not disabled" I was a bit taken aback by this - he clearly is, but I know he's too ignorant to admit his TRUE feelings. When I wrote the original thread about 2009, he has changed a little in that he's a little more tolerable, but I'm putting my foot down and if he oversteps the boundary, I will say so, so I'm treading on eggshells - we only see each other at the weekend, and we are just mates, we are not anything else at all.. some people seem to think this but no, I'm for women completely. Cheers for your advice :)
08/03/12 Peejay
-9

I went back and read your first gripe and the advice you were almost universally given, to break off this toxic 'friendship' which is obviously not really anything of the kind, and is not good for you at all. TWO YEARS on you are still 'together' in whatever sense of the word that might mean. Not many people will be able to understand why.
You write well - you can spell, punctuate and express yourself, so you must have some intelligence. You must know that the answer is to break away from this creature, who at best is using you, at worst I hate to think. I know how hard this can be when the alternative as you see it is being alone, or if you have feelings for somebody (not saying it's like that, but why would you put up with this otherwise).
I know from personal experience that the longer this goes on, the more it will undermine your self esteem, and keep you from making other friendships. You will hate yourself for putting up with it, and hate him for doing this to you - yet the longer you stay in the situation, the harder it is to break away. You begin to feel you 'deserve' this kind of treatment. I wasted 10 years of my life with a person like this, with the additional treat of getting regularly beaten up, so I do know what I'm talking about. PLEASE listen to the advice you were given and try to make a life without this person before it is too late.
PS He's right about one thing - you don't take your car if you're going out drinkng and clubbing. Going halves on a taxi is what most people do...just a thought.
08/03/12 Jetstream
5

Peejay, could it be that your friend has a form of autism? Sounds like from your description there are some autistic tendancies - adhering to regular patterns, inflexible, at times anti-social and immature. It could be why he's quite difficult to get on with. Just a thought.
08/03/12 Youthful Griper
-1

I don't want to talk to you, just leave me alone