My issue today is regarding freedom of choice - especially when it comes to food.

I live in a large northern town in England in which I have lived in for 45 years.  My home town has a huge diverse population with various large communities that predominantly brings enrichment to the town.  But it also brings issues, especially when eating out at a Restaurant or buying in a takeaway and the choice as to whether you choose RS (religiously slaughtered) or non RS Meat. At present the town is saturated with takeaways and restaurants that only serve RS Meat leaving little choice for the many residents whose preference it is not to eat food that’s been religiously slaughtered.

After doing some research I discovered that, apart from McDonalds and the local Wetherspoon, all the takeaways and the majority restaurants in and around the town only serve RS Meat which would include the fake Pepperoni or Ham.  For example we have 2 Nandos in the town and as far as I'm aware Nandos are the only restaurants that do both RS and non RS outlets. We have one Nandos in the town centre and one on a retail park just outside the town both of them only serve RS Meat, which to me isn’t fair. Surely as a business model it would be fairer to have one that serves RS Meat and one that doesn’t, neither one of them openly advertise that this is the case.  As for restaurants, if you choose a certain kind of restaurant to frequent then it's a foregone conclusion that RS meat will be served and that’s fine, you can choose not to go or to go Veggie.  However we do have Mediterranean and various other styles of restaurants and you would automatically assume that they would not be RS - you would be wrong.  I have emailed a few of the restaurants asking the question as to what their meat products are and very few have failed to respond (in which speaks volumes).  Also a bit of a giveaway is to look round at the other clientele. 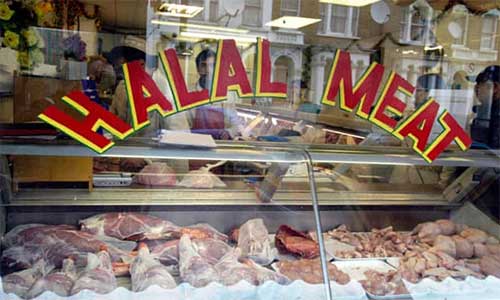 I have written to our local council asking for a list of the RS and non RS eateries, which, of course, they could not provide.  However, I was advised that by law if you were to advertise RS Meat as non RS Meat then its perfectly legal and ok to do so. But to advertise non RS Meat as RS Meat would be breaking the law and you could be done under the trades description act.  Surely all Meat needs to be correctly labelled whether it is RS or not? To mislead one and not the other is unfair and wrong.

As we all know this is a delicate topic...

As we all know this is a delicate topic, in which the fear is of being accused of being a racist and I would like to stress my gripe has nothing to do with race. So, before the race card is produced I just want to add that I am not opposed to RS meat and as long as the animal is slaughtered humanely then there is no issue in having RS food if that’s what you want.

But as a consumer I do think it's only fair to have all options open and this is about freedom of choice.  It never fails to amaze me that either people don’t care where their food comes from or are blind as to what is going on around them.  As a customer and consumer everyone should care and no matter what your background or culture, everyone has the right to choose and the choice should be out there so as a consumer you can make that informed choice.  But as I am finding out the right to choose has and is continuing to be taken away from us. The thought of having just McDonalds and the local Wetherspoon (as good as they are) to choose from is quite frightening!

Takeaways and Restaurants are just the tip of the iceberg.  What’s going on in our supermarkets? Are you absolutely sure you know what you're buying because none of your meat products are labelled and a lot of everyday products like bread (which obviously isn’t meat) are also certified RS - which includes taking the freedom of choice away.  Who do we turn to? Who do we ask? Most importantly, why are both options not available?  In the end this  is effectively stealthily taking away our freedom of choice.