I'm sick and fed up hearing about religion on the news and in particular, that yet another pupil has been excluded because they felt the need to manifest their religion by wearing some article of clothing or jewellery.  Why can't they get it into their heads that school is the place where you go to learn?  Schools must have rules and those rules must apply to everyone.

Sikh girl excluded from school for wearing a bangle

The latest story that caught my attention was the one about the Sikh girl who was excluded for wearing a bangle.  Before that we had Muslim head scarves and the Christian crosses causing an uproar in school.  Okay a bangle might not seem like a big deal, but schools can't afford to make exceptions and I think that is the point that some of these individuals are missing.  If allowed one thing and not another it would only lead to confusion and presumably endless court cases.  Also, religious symbols worn in school can't possibly be of any benefit to the educational experience.  It only serves to alienate pupils and highlight the differences. 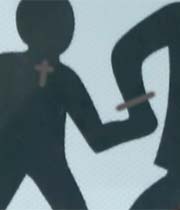 In my opinion, religion is possibly mankind's worst trait.  Look at all the wars fought and the inconceivable number of people who have died in the name of religion!

People are still dying, are still poor and hungry, all because of this need to demonstrate to everyone else that your faith is the one true religion.  It's a case of, "If you don't believe in my god, you must be evil."  It may not start off that way and some people are more devout (read extreme) than others, but it's happening all around us regardless.

A world without religion would be fine by me.  Actually, I think John Lennon's song just needs to be shortened to "Imagine there's no religion..."

Anyone wearing a T-shirt in school with slogans and logos promulgating "Global Warming" is caused by carbon emissions or like is promoting a kind of Greenpeace religion. This should be banned outright. There is not firm evidence for "Global Warming": its adherents are little more than religious fanatics
13/06/11 Religion: Nein Danke
-4

There is no Afterlife: the only hereafter is an bureaucratic Aftermath. In former times your descendants would pray for your soul to rise from Purgatory to a Heavenly existence. Now, what they face is a Kafkaesque type bureaucracy concerning the remains of your business dealings in life, your will, your property, your chattels and estate. They wish you in Hell for the mess you have left behind. Remembrance of things past? Rather not, better you had never been. The only thing worthwhile remembering about you is, if you have left any real money or property. More often than not you have probably died intestate. This is bureaucratic equivalent status of not having been baptised. It is as if you never were. And because you probably were a complete selfish being, your entire estate has probably ended up in the hands of the Government as inheritance tax, because of your neglect to make any proper financial plan for your demise. May your soul (if there is one) last in perpetual torment.
31/05/11 Godlessness
-2

I am a student at a high school and I do care that in year 10 I can not make the decision to drop religious eductation. I think that to me it is a waste of time as I dont want to be anything religious when I am older. I really dont see the difference between droping history to droping R.E. I think I should be able to chose whether I drop it or not. Because of this I am now wasting an 1hr of my life every week which I could be revising in or doing someting usefull
06/01/11 Yazzz
-7

Councils do it to cause divisions. Minimal complaints received and maximum impact when applied.
Kids actually don't care a monkeys! I just wish parents would stop putting religious ornaments on any kid because adults in governments, councils, religious organisations take advantage of it.
12/12/10 student
-2

Of course,there is the possibilty that religious symbols could be used as gang symbols...but these are just the ramblings of a cynic...aren't they?
12/12/10 DSG
-2

No matter what,there will always be something that upsets or offends people,and councils can't stop that.
12/12/10 DSG
-3

Kids are not offended. The only people who moan about this are committee members, the odd parent and political parties.
The rest of us don't care, especially the kids. So leave the kids alone and don't bring politics to divide us!
12/12/10 student
-1

isn't religion about belief surely an object cannot change what you believe also many people can be bullied and looked at differently for what they are wearing e.g: a turban
i am agnostic and religion makes people happy in some cases... but the amount of people that have died for it is really not worth it
and at my school if you aren't jewish you aren't popular so yeahh...
04/11/10 scrootiemcbooogerballs
-7

You are right.
Religion is evil
It divides people and provides a reason for discrimination against people who don't hold the same beliefs.
I had the misfortune to be "educated" at two faith schools and the experience ruined my life.
However long you live you never really recover even though you no longer believe the nonsense they taught you.
25/08/10 WinstonSmith
-6

Religion is politics. Politics is religion. If we are going to allow the wearing of religious symbols in schools we should allow the wearing of political symbols. Everyone is allowed to be a member and adherent of whatever party or religion they like. So one's child could choose to come to school wearing a SS officer's uniform if they so want to. Or sport a clenched fist badge if they were Communist. Or wear red and black if they were Anarchist.

One could wear a badge with the words "I despise God", "I hate Allah". Or one saying "I am no religious toady".

If you an adherent of the Scientology Cult one could sport a badge saying "Having you paid your subscription today?"
05/06/10 Godslayer
14

Religion is not going to go away,it's big business and provides a good living and power for many.I say no human ,knows what this existence is really all about.
02/06/10 n.k.w.i.a.a.
-14

I think having to take of your jewellery or religious symbols is rediculous and unfair :(
18/05/10 love tree
3

I've never seen such a lot of ignorance in a long time. Where does "Free Love " get information about satan ? satan is not a title nor is it a name of a "god". The word simply means "adversary" for good or for bad. I suspect all you Bible bashers out have never even read it (or even understand it) yet feel qualified to comment on God.
22/02/10 Comentor
-2

Oh come on, there must be ten or twenty different gods that we humans worship, if there is a god, only one of you worshipping groups are correct.
05/02/10 Gainsborough lad.
-12

I don't think we're laiers. But I do think that you're wrong. Who are you anyway to say that God is bad. Did you see him, or even have a conversation with him? I think he is just great and fair. You also have the freedom to choose your own religon and God, but doen't say something bad about other peopeles belives!
05/02/10 Carol
4

No Freedom Of Choice With Religiously Slaughtered Meat