Isn't it disappointing to see how the small-mindedness behind the "Anyone But England" tendency has wormed its way over to the seemingly more mature game of rugby?  Rooting for any team playing against England was always rife in world cup football but sadly it's now become a fashionable disease in all international sports including rugby, where the rivalries between teams have always been less fierce and the supporters can even be seen mingling and drinking together.

In the recent match between England and Australia of the 2015 RWC I was saddened to hear fans who sported Australia shirts speaking with English accents along with foreigners who have no ties whatsoever to Australia getting behind the 'wallabies' just to fashionably stick it to England.  When asked, they claim 'it's only a game' and really 'just a preference' but I suspect with this modern cultural trend it's probably more than that.

Just like in football, namely the Scots, Welsh and Irish have this culture of grovelling by rubbing shoulders with supporters of foreign teams, wearing foreign sports shirts and lapping up foreign players as opposed to what they accuse us of being by sinfully supporting our own team and daring to remember our only victory in 1966 - which they say is arrogant, inward-looking or living in the past.  Our press and sports commentators are the same they claim by having this strange allegiance towards England - like we are expected to have a gut-wrenching worship of other countries' teams like they clearly have! 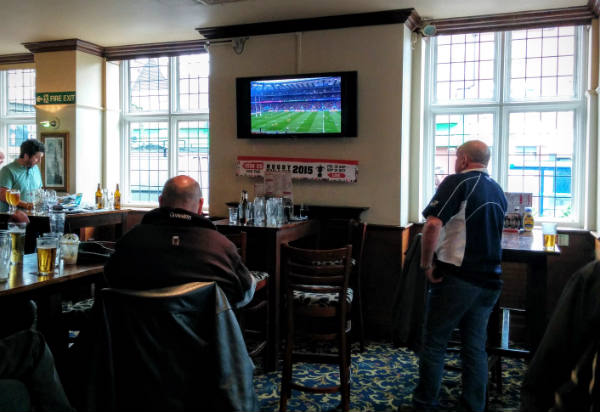 This petty parade of hobnobbing other countries is both a fashion and a culture that I believe has sadly bled over from football to rugby which I don't believe is on its way out any time soon.  I could even understand the concept if England were a world-beating nation who triumphed at every sport, then it might even be a worthy fashion but the reality is we are underdogs, so rooting for England to lose at sports is like hoping Siberia becomes even colder.

No, it is an understatement that England has very little chance of winning this rugby world cup but I hope whichever nation does is not a part of this toadying Anglophobia.  By that, I mean other English speaking nations such as our British neighbours and so-called cousins down under.

The author's right, it is a fashionable culture of grovelling and toadying to nations which the Anglophobes have no ties to.

As a result of articles like these, we hear the whinges of Scottish fans bleating on how it's a free country and not compulsory to support England. It's not compulsory to support England's opponents either but they have no problem adhering to that, and just imagine how much a 'free country' it would be to wear an England shirt north of the border - 10 years ago a 'huge black eye' comes to mind, Google it.

Scotland really are full of shit. They tell us we're not allowed to support our own national team because it's somehow jingoistic or small minded yet they sport Argentina or Brazil shirts like a religion. Then we mustn't have fond memories of our one-off victory in 1966 as it's 'living in the past' yet they will remember that foul 'Hand-of-God' incident for many years to come.

Also for the record, we haven't asked them to get behind England any more than they've asked us to get behind Murray in the tennis - which I never did that matter - but not because he's a Scot.
12/02/16 Jack Black
1

This is really sad, all you complain about is who supports who, thought we had freedom of choice to a certain degree, you want to take that away?
Really sounds like it, making a sad plea to put this under Anglo-fobia? You have the hallmarks of a bully, simple as that.....
27/12/15 A fan
1

Just over 18 months ago I posted this on a similar gripe;

"I remember being on holiday in Corfu several years ago when the World Cup was in progress. (The gom and I have no interest in football.) One evening we went to another hotel to see some people we had met and were all sitting in the lounge area where the football was on. It was England playing, I think, Portugal.

There was a young Scotsman there (with wife & kids); he, of course, was shouting for Portugal. He was getting funny looks from all around, and this was in a small quiet hotel, but in a resort full of English football supporters.

I was itching to see him go outside and start cheering for Portugal in the street; just to see how far he got before being set upon. In a busy bar I wouldn't have given him 2 minutes!

We saw the opposite a few years later on holiday in Turkey when the World Cup (or something) was again in progress. All the football fans among guests and staff would gather in the bar to watch the matches together. When Turkey was playing they would all cheer for them; when England was playing it was the same. Much friendlier!"

It seems that now this anti- English attitude has spilled over into Rugby. Very sad.

Grassy; this is a gripe site, here for people to complain about anything they wish to, trivial or not. If a particular subject is beneath you then don't bother to post a comment; stick to the ones you feel are important enough. In any case this trend is indicative of a much larger problem.
28/11/15 grumpyoldwoman
1